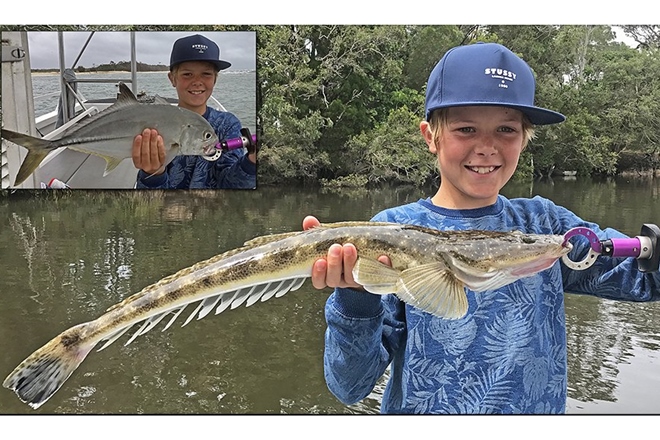 Jack Davis from Melbourne with a bigeye trevally from the river mouth and a 60cm flathead which he boated in Weyba Creek. Both caught on whitebait. Photo: www.fishingnoosa.com.au

Wet weather will get the fish on the chew

Over the past week there have been quality fish landed in the Noosa River thanks to the wet weather, with the area around the Tewantin stretch and Noosa Harbour a favourite for jack anglers. A lot of anglers have preferred to use live baits like herring, poddy mullet or live prawns. Using a snelled 2/0 hook setup for the bait fish and a single for the prawns, Mustad Penetrators are great as they are very strong as well as being a lighter gauge so they do not damage the bait.  Using soft plastics like the Keitech Easy Shiners or the Zman Ez Shrimpz have also been seeing some success. In the low light periods surface lures will also attract the red devils.

Whiting have been in good numbers around the Frying Pan, Gympie Terrace, Munna Point and the Dog Beach. The preferred baits have been live worms, yabbies and pealed prawns using a size 4 longshank bloodworm hook. If you want to have some fun, have a go chasing the whiting on surface lures, the 65mm Fish Candy Skinny Dog from River2sea has produced some better elbow slapper. Though the water is warming up there are still good schools of trevally and tailor present throughout the Noosa Sound and Woods Bays. Small pilchards, hardy heads and frog mouthed pilchards have been the go to bait. Flathead still dominate the captures in the river and are in great numbers, for the bait angler small fish baits, prawns and cut baits have been great, for the lure anglers try Soft vibes like Jackson quiet beats and Fish Candy Curly Vibe, soft plastics give the Samaki Boom baits soft plastic a go and for hard bodies the Lively Lures Mad Mullet and the Zerek Tango shads are worth a try. The Crabs are on the move as the fresh water flushes through the system, set your pots in deeper spots and more saline area closer to the mouth as this is where the crabs will be heading.

Offshore out of Noosa; the offshore reefs are producing some great fish like snapper, pearl perch, jew, sweetlip and cobia. North Reef, Chardons Reef and Sunshine Reef have been the prime spots. The Reefs east of Double Island point in around 60m of water have seen larger pearl perch and the odd red emperor. Those hard fighting pelagics are really starting to come on with good schools of spotted mackerel and tuna taking live baits and floaters. Up toward Double Island there have been some great captures with some monster snapper and big pearl perch taken on soft plastic like Chasebaits 7” fork bait and Zman 7” Streakz on 1oz to 1 1/2oz jig heads. For those anglers that love to jig the slow pitch Jigs, try Soul Flashy Flutter and Gomoku Slow Rocker, these jigs have put some great fish in the boat.

On the beaches; though the wind hasn’t been in our favour this weeks, the beach anglers have been getting some nice fish while braving the conditions. Anglers are reporting quality tailor being caught fishing the deeper, cleaner gutters along the Noosa North Shore. Using mullet and bonito strips on a 3/0 ganged hook rig has been a prime bait. Good numbers of good sized whiting, dart and bream have also been taken from the gutters along Noosa North Shore while the southern beaches around Marcus and Peregian have seen good catches of both whiting and dart.

In the Fresh, the Bass are holding in the deeper sections near the boat ramp at Borumba, Fishing the upper arms has seen some saratoga around the heavy timber.  Working the weed edges has also been good for bass, try using Jackall Pompadour and Strada Zedia and OSP Bent Minnow.