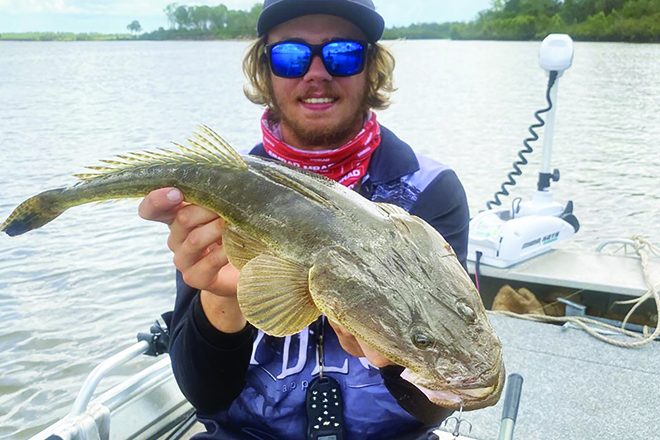 A quality dusky flathead caught on a Samaki Vibelicious.

When the fishing gets tough

“That’s why it’s called fishing, not catching,” I said with a resigned face after a quiet day on the water and not landing any fish.

Fishing gets tough! For fishos, few things are more frustrating than fishing your reliable spots and coming away without a bite. It’s disheartening working hard to fruitlessly fish the same tides and times that have proven successful in the past.

Driving home after a disappointing day and thinking about how long it’s been since catching a decent fish, you can lose hope and interest. But when the next weekend comes around, you’re hitching the boat, keen as mustard to get out there again.

This is when the true meaning of the “it’s called fishing, not catching” saying shines through.fishing gets tough

Fishing for certain people is a job, for others a sport, and for many a hobby. All-in-all, it’s an enjoyable experience and satisfying when you’re out there doing it. These feelings keep us coming back.

Catching a feed or trophy sportfish is the added and exciting bonus. I could fill an article with the wild fishing stories the new year and barramundi season have supplied me, but unfortunately, considering the significant number of hours spent on the water recently, we have very little to show for it.

Trip after trip, travelling far and wide, the local rivers and creeks haven’t turned it on, but this hasn’t stopped us.fishing gets tough

If anything, it’s given us more urge to get out and break the drought. Recently, we searched four local river/creek systems, from fresh to salt water and boat to kayak. Now you’d think doing the miles would get us the smiles, but still very few fish were landed. On our final effort, we dropped the boat into a local river to try one last location and on the second cast, using a Samaki Vibelicious vibe, I hooked and landed a sizeable flathead. fishing gets tough

The fish wasn’t a record-breaker but gave us a sign the forces weren’t against us. After travelling hundreds of kilometres to land only one flathead at our final destination, guess what our plans are next weekend!?

When fish aren’t jumping in the boat, many people use their fishfinders or sounders to scan for structure, fish and bait. It’s a fantastic way to locate fish but can be an expensive addition to your creek tinnie and isn’t essential when it comes to finding quality fish. It may take more effort but it’s not as though spending more time on the water is a bad thing, right!?fishing gets tough

An excellent way to detect fish is to check the water at low tide. This can be difficult in some areas due to water depth, but it does show things not often seen on a sounder screen, such as currents.

You can see deep banks, structure and pressure points where the current is forcing bait into areas predatory fish may like to hold. You may even find evidence of fish in the sand above the waterline, for instance, flathead lays (indents) left during the high tide. Knowing flathead lay in that particular area on a certain tide, you can come back and hopefully bag one or two.fishing gets tough

If you can’t access an area on low tide and don’t have a sounder to aid your search, you can use your lures as fishfinders. Casting in a pattern and trolling the area (similar to the game Battleship) with a lure in each grid square can be effective. After a hook-up, it’s a good idea to work this area thoroughly because often there’ll be more.fishing gets tough

Summing up, the only way to catch fish is to get out there and try. It may not always happen like it does on TV, but it’s great fun trying and all the more rewarding when you do finally hook-up after a long day of casting.

You never know what trophy fish are out there until you get out and fish, so wet a line this weekend and find out!

Joel is blessed with the fish-rich coastline and waterways surrounding the Bundaberg region. With an array of options and possibilities around, he favours the shallow flats and small creeks and specialises mostly in lure fishing. Joel loves to broaden his abilities with new concepts and techniques, so feel free to email him at jmj-31898@hotmail.com
Previous BIA welcomes loosening the restrictions on recreational boating
Next Benefits of late-summer rain being seen in Broadwater