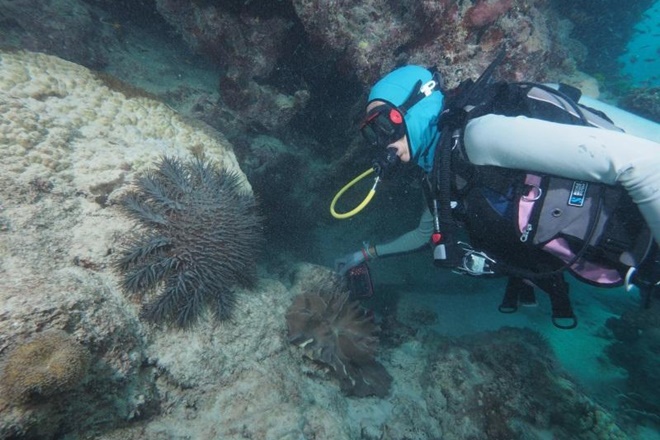 Crown-of-thorns starfish are on the menu for many more fish species than previously suspected, an investigation using fish poo and gut goo reveals. The finding suggests that particular fish including popular eating and aquarium species might have a role to play in keeping the destructive pest population under control. The native starfish acanthaster solaris is responsible for widespread damage to the Great Barrier Reef.

Since 1962, its population has surged to plague proportions on three occasions, each time causing the loss of large amounts of hard coral. A fourth outbreak is currently under way.

Increasing the amount of predation on starfish has long been touted as a potential solution to preventing outbreaks. Yet aside from a mollusc called the giant triton – charonia tritonis – identifying what eats the starfish has been a challenging task.

A team of scientists led by Dr Frederieke Kroon from the Australian Institute of Marine Science in Townsville, Australia, has applied a genetic marker unique for crown-of-thorns – and developed at AIMS – to detect the presence of starfish DNA in fish poo and gut contents.

Over three years, Dr Kroon’s team used the marker on samples taken from 678 fish from 101 species, comprised of 21 families, and gathered from reefs experiencing varying levels of starfish outbreak.

“Our results strongly indicate that direct fish predation on crown-of-thorns may well be more common than is currently appreciated,” Dr Kroon said.

The study, published in the journal Scientific Reports, confirms that at least 18 coral reef fish species – including spangled emperor, redthroat emperor and blackspotted puffer  – consume young and adult starfish on the reef.

Among the species were nine that had not been previously reported to feed on crown-of-thorns, including neon damselfish, redspot emperor and blackspot snapper.

“Our findings might also solve a mystery – why reef areas that are closed to commercial and recreational fishing tend to have fewer starfish than areas where fishing is allowed,” Dr Kroon said.

She and colleagues from AIMS worked with researchers from CSIRO Land and Water, and managers from the Great Barrier Reef Marine Park Authority to conduct the study.

The Great Barrier Reef Marine Park Authority director of the COTS control program, and co-author of the paper, Mr Darren Cameron said: “This innovative research sheds new light on the extent that coral reef fish eat crown-of-thorns starfish. A number of the fish species shown to feed on these starfish are caught by commercial and recreational fisheries, highlighting the importance of marine park zoning and effective fisheries management in controlling crown-of-thorns starfish across the Great Barrier Reef.”