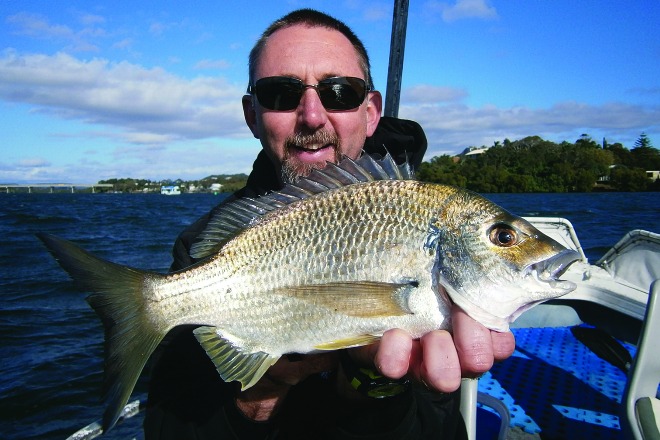 Winter is the Best Time to Target Bream (How to Guide)

G’DAY everyone; here we are entering winter, which in the Gold Coast and Tweed river systems means it is the best time of year to target bream.

During the lead-up to both the new and full moons through winter, bream congregate to spawn around the entrances and lower reaches of our rivers and creeks.

Not only is it important to plan your trips around the moon cycles but it’s also important to note that the feeding habits of bream seem to spike during the first two hours of the run-in tide, whether it be morning or night.

The anglers who choose to fish for bream at night are best served by anchoring and fishing with good-quality baits such as yabbies, whitebait and freshly cut baits of mullet or gar.

The old-school bream fishers still swear by the nasty-to-handle mullet gut. You can of course still use bait during the day, but as the years go by a growing number of anglers are targeting bream on lures, which on light line and light equipment makes for fantastic sport.

Some of the better places to find bream schools are along the rock walls in the Gold Coast Seaway and the entrance of the Tweed River as well as the big expanses of broken reef that can be found inside both these systems. Bream will congregate around deep holes near the mouths of rivers and sometimes channel or navigation markers.

The most common outfits used by anglers chasing bream on lures are 1-3kg and 2-4kg spin rods matched with small 1000-2500 size spin reels loaded with 6lb braid and 6lb fluorocarbon leaders, which for most estuary lure fisherman is an all-round mainstay combination.

Soft plastics are commonly used to target bream. My favourites are the Damiki and Z-Man brands, with their 2” and 3” curl tail grubs in either the Pumpkinseed or Motor Oil colours being great performers. I usually use a 1/6oz or 1/4oz TT jig head as my first choice but if a lot of current is running, which is common in the above areas, you may have to increase the jig head size to keep your soft plastics on the bottom.

Blades are another excellent choice for targeting bream and once again need to be worked as close to the bottom as possible. The most common technique to keep both soft plastics and blades along the bottom is to cast the lures up-current while drifting.

With the current and lure moving in the same direction, let the lure swim like a pendulum to the bottom before it starts to suspend and then repeat the process over again. Depending on the depth you are fishing, small deep-diving minnows can also be used to troll along the rock walls and reefs. Trolling with the tide and not against it will make your lures run deeper than their recommended depth or dive rating.

Another trick that sometimes works well for bream is to keep an eye out for any bird or surface action, which can indicate that tailor or queenfish are smashing bait on the surface. At times, big bream will move in under this action to forage on the bait scraps floating to the bottom.

I look forward to talking to you again next month. In the meantime, bring on the bream!

Smithy has been working as a full-time professional fishing guide for over 20 years, which makes him southeast Queensland’s and northern NSW’s longest-serving guide. Above all the commitments Smithy has in the charter industry, his overriding passion has always been to pass on his specialist experience to anglers and teach people of all ages and angling abilities the correct techniques required to catch all the Gold Coast’s estuary species on a variety of different lures. Smithy’s unique charter operations guarantees you will catch fish on lures or you don’t pay.
Previous Burnett River Fishing as Good as Ever
Next New Ocean Craft 4400 HD Beamy