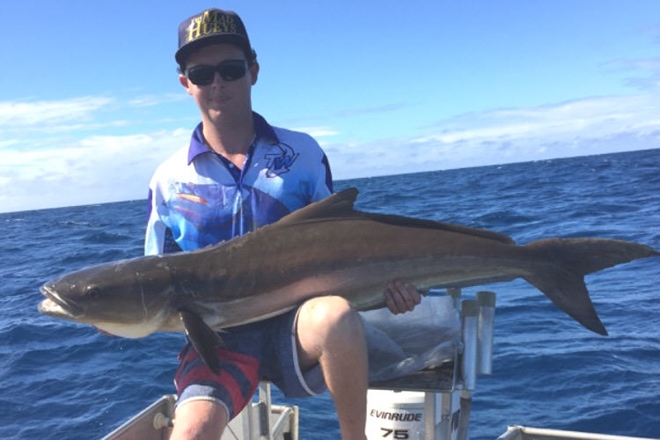 Mitch Beyer with the solid cobia he caught off Bundaberg recently.

It would seem that the first signs of winter species have appeared around the Bundaberg area.  The last few mornings have been a little fresh – perfect weather to fire up our winter species like flathead and bream.  This is just in time for the annual VMR Family Fishing Classic, held at Burnett Heads in a couple of weeks, on the 23rd, 24th and 25h of June.

The full moon is on Friday night, and the forecast at this stage is looking okay for this weekend’s fishing.

The cooler weather has seen some nice snapper and massive grunter up to 70cm caught around the Cochrane Artificial Reef and many other of the shallow reef systems just offshore along our fantastic coastline.  School of cobia, mackerel, tuna and queenfish are providing plenty of entertainment for anglers wanting to test their skill against these pelagic series.

Back into our rivers and creeks, the Burnett is fishing really well.  Whilst it’s early in the season, some of the bream caught have been amazing.  The popular haunts like Kirby’s Wall, North Wall, Millaquin Hole and around the bridges in the town reach are all working well.

Some nice sized blue salmon have showed up in the town reach as well.  These fish seem to be biting better on the high tide, taking soft vibes and soft plastics worked closer to the bottom.

It’s great to see the size of the summer whiting being caught in the Burnett at the moment.  Casting lightly weighted yabbies and peeled prawns around shallow sand bars has been accounting for quite a few whiting up to 40cm.

The Australian Bass Tournament held their latest round at Lake Cania last weekend and by all reports, some top quality bass and saratoga were caught over the weekend.

Back closer to home, Lake Gregory has also been fishing well for Australia bass.  The bass should be starting to school up at this time of the year, making them easier to catch in the deeper water using blades, tailspinners and soft plastics.

Well, we are into the first week of winter and the barra seem to be still on the chew up at Lake Monduran.  I did hear of lots of 60cm to 80cm barra caught during this past week.  The water temperature was around 22 to 23 degrees and with the full moon on Friday night, the barra fishing should be definitely worth a crack.