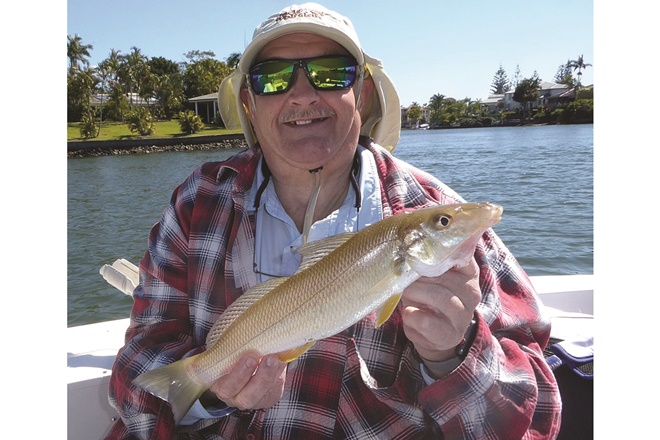 Pete and a late-afternoon whiting from the Nerang River.

Wonderful whiting on the way

BOTH the air and water temps are warming and this means a lot of us will be looking forward to wonderful whiting fishing in the Nerang and Coomera rivers.

While you can catch whiting all year round on the Gold Coast, it is at this time of year when they become more plentiful and easier to find. For the next five months they will be downstream, within easy access of their spawning grounds in the Gold Coast Seaway. Main fishing areas will be between Sundale Bridge and Isle of Capri in the Nerang River and Paradise Point in the Coomera River.

Preferred fishing times are between 5pm and 10pm, though not because this is the best fishing time because they can be caught all night long. Rather, these times give you a good chance to have a look around before dark and set up, then get back home without spending all night on the water. Us old fellas need a good night’s sleep.

One of the questions always asked is what tide is best when planning trips – run in or run out. After 25 years of whiting fishing on the Goldy, I can honestly say either one. The biggest difference between tidal flows is on the different tides the whiting may move into other areas to feed. This is where knowing your location and having several spots to fish during both the run-in and run-out tides is very important. The most popular location in the Nerang River is the Council Chambers. Very few local whiting fishos won’t have fished there. It’s a great spot but can be extremely crowded on weekends leading up to both full and new moons, which are supposedly the best times to fish.

While these times can be good, it is certainly more relaxing and enjoyable to fish without the crowds and the fishing is still very good on all parts of the moon phase, as long as you use a good bait and technique. For bait, nothing beats the three types of bloodworms: mangrove bloodworms, Redcliffe rockies and Cribb Island bloodworms. All are great and will catch plenty of whiting. Unfortunately, they are all hard to dig and expensive to buy.

The technique used for successful whiting fishing is basically a ‘do very little’ style. Again, this suits a lazy fisher like myself to a tee. Most whiting fishos will use multiple rods. I prefer to use three because the only time you are holding them is to cast and to wind in a fish. I run a 7’ Wilson Live Fibre out the side of the boat, a 9’ Gary Howard Estuary (the best whiting rod I have ever seen) out the back corner and a 10’6” Snyder Glas Crusoe Island out the back. This may seem extreme, but it is amazing how many times one rod will out-fish the other two by a considerable margin. Three rods is the maximum permissible per person in our area.

Using 4 or 5 ball sinkers means the lines will stay where they are cast and not tangle. Rods are cast out and laid as flat as possible and not held at all. You simply closely watch the rod tips and the first indication of a bite will be a slight quivering of the rod tip. Don’t touch the rod because the whiting is merely tasting the bait. Normally, a few seconds later the same thing will happen. Again, don’t touch the rod because the whiting is softening the bait using its crusher plates. After a few seconds the rod will bend over as it takes the weight of the fish.

Simply lift the rod to set the hook and then wind the fish in. Sounds easy but being patient enough to sit there and watch a very tentative bite can really test your nerve.

Now let’s talk tackle. Six-pound Schneider mono line is preferred. There are thinner lines out there but none stronger that will stand up to a few hours of whiting fishing. Trace is 6lb as well. Main line can be used but my preference is for fluorocarbon leader because it tends to sink more in the water and keep your bait on the bottom better. Trace length is important as well because of the larger sinkers used. I’ll run anything from 1.5-2m to make the bait look as natural as possible. While specialist worm hooks are available, they are expensive and have too long a shank.

Remember what I said about the worms? They are too dear and too hard to get to be filling up a long-shank hook. A short-shank size 4 bait-holder hook will work just fine, with the barbs on the shank of the hook helping to hold the bait up the shank and hide the hook inside the bait. Preferred locations in the Nerang River are Isle of Capri all the way downstream to the Council Chambers, and both east and west channels of Chevron Island.

Also try from The Southport School down to Sundale Bridge, however this tend to be where the smaller male fish hang out. In the Coomera River, the sandbank at the tip of Paradise Point and the stretch of river between Hope Harbour and Sanctuary Cove can be good. The run-in tide is definitely preferred in the Coomera because catfish can be a problem on the last half of the run-out tide.

You might find it helpful to paint the last 45cm of your rod tip white to make it easy to see at night. Using a second anchor out the back of the boat to hold the boat still and straight is very important when it’s windy or there’s lots of boat traffic.

Remember, if you’re not catching fish, move! About 30 minutes is plenty of time to catch a whiting. A quick move or two could be the difference between half a dozen fish and your best-ever fishing trip.

Wayne started fishing seriously 22 years ago, and 19 years ago moved to the Broadwater region on the Gold Coast because it had the best and biggest whiting in southeast Queensland, which is still true to this day. He works most Saturdays at Oxenford BCF and spends almost all the rest of his time fishing and crabbing the Broadwater and the rivers that run into it. Since moving there he has discovered that despite a lot of boat traffic it is still a great place to fish, with an amazing variety of species to catch.
Previous King of the River a success
Next Perusing pedal-powered Hobie kayaks