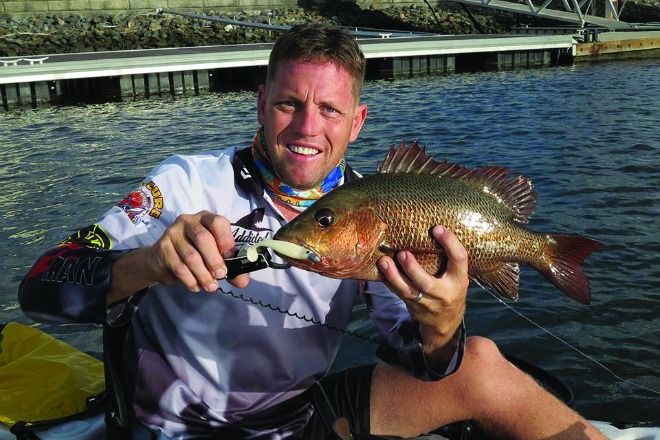 Brad landed a decent red dog from his kayak on the Coomera River.

10 Tips for Fishing the Tweed River and Terranora Creek

IF you’re planning on fishing the Tweed River and Terranora Creek, all manner of species are on the chew. Jacks are still chomping around most structure and white soft plastics are their current favourite. Some big bream have also moved into the river systems, closely followed by luderick.

The first thing to remember when fishing the Tweed is that you require a fishing licence if you are over 18 years old. The small cost offsets a $200-plus fine if you are caught without one.

When fishing the Tweed, I like to fish as lightly as possible and on the slack of the full tide so the weed beds close to the bank are covered with a decent bit of water and water flow is minimal.

The Tweed is a big river system and when the tide gets going it roars. For bream, I fish with no trace and a single hook. I simply let the bait waft down the water column with an open bail arm and it usually doesn’t take long for a fish to hit.

If fishing for jew, however, you have to up the ante significantly, with heavier gear in the range of 30lb and hooks of about 7/0 snelled together on a trace of roughly 40cm. A live mullet is perfect for this sort of fishing.

10 Tips for Fishing the Tweed River and Terranora Creek

Tweed River Bar still has the bank out the front that is starting to catch some swell. Currumbin Creek Bar is a mess and only experienced skippers should attempt to cross it because it is very shallow. Tallebudgera Creek Bar has a little gutter on the southern wall that is allowing boaties to get in and out, however its northern side is very shallow. The Seaway is in good shape but keep an eye on the banks to the north.

Heath has been fishing since the age of three and grew up fishing the mighty Georges and Hawkesbury rivers.
Previous Prawns and Barra in Big Numbers around Bundy
Next Stir-Fried Prawns and Scallops with Angel Hair Pasta Recipe