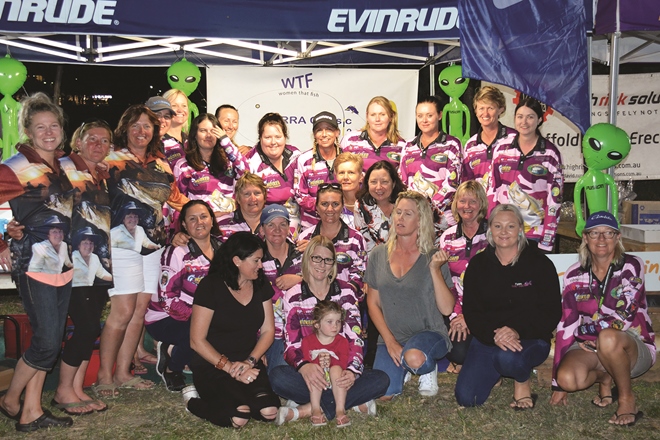 WOMEN That Fish … what else could WTF stand for?

Just like the blokes, us girls love fishing and will usually jump at any excuse to get out there and wet a line. But when there’s a competition, familiar faces to catch up with and new ones to meet, lots of fun to be had and maybe a prize or two to take home; well, that’s all the encouragement we needed. The Women That Fish committee girls and helpful fellas put on a fantastic event at the Fitzroy River in Rockhampton. Altogether a total of $20,000 worth of prizes was up for grabs and no one went home empty handed.

The event has grown each year since the inaugural Women That Fish Barra Classic in 2012. Now in its fifth year, 26 female anglers and 14 male captains went chasing barra on the Fitzroy.

Thursday night kicked off with a meet and greet, briefing and barbecue before we fished all day Friday and Saturday. The venue was the Riverside Tourist Park, which is right on the river on the north side of Rockhampton. This is a very neat and tidy park with all the facilities you’d ever need and the owners couldn’t do enough for the Women That Fish crew. The park is in a great position. A small boat ramp is located just one minute away, or you can take a short 10-minute drive over the old bridge through town to the multi-lane ramp next to the boat club.

You know that old saying: “You should have been here last week.” Well only a couple of weeks before the event, the floodgates were opened to let floodwaters through from further upstream, turning the river a light brown, which usually disrupts the fishing for a while. It did, but the big tides managed to dilute the water enough to see the anglers find more fish than the previous year.

Eighteen barra were landed on Friday and 22 fish were captured on Saturday for a total length of 20.7m. The biggest barra was an 89cm fish caught by Melanie Rapley. No metre-long fish were caught, though the rest of my team thought one fish I hooked was possibly a metrey because it made a huge swirl on the surface just after it ‘fell off’. I was off the hook soon after when someone else dropped another, hey Toni? But that’s fishing; sometimes they just don’t stay hooked.

As the name implies, it is a barra comp, but other species aren’t overlooked and this year quite a few were boated. Estuary cod, flathead, black jew, blue salmon and the ever-present king or threadfin salmon were caught. The biggest king was a 1.02m fish hooked by Becky De Haas from team Chicks that Flick.

It really is a top event and our team Keeping It Reel, comprising Jodie Diefenbach, Toni Westaway, captain ‘Dale’ Cupcake and I, had an awesome time. Another thing we noticed was just how helpful everyone was in terms of sharing tips with each other. I’ve fished many events over the years and the only other events in which I’ve seen the same level of camaraderie were fly fishing comps. Another important part of the event is the men/skippers/boat bitches, and they are not left out at all. They all received a nomination pack and heaps of praise from us women. During the comp I saw some awesome examples of just how encouraging and helpful the fellas were.

For example, on the second day everyone on our boat was really hanging out for coffees. So Jodie rang her husband Dale, who was back at the cabins, and put in an order for three coffees, doughnuts and a rum and coke. I don’t do coffee but I didn’t want to be left out! Soon after, Dale met us at the boat ramp with a smile, three coffees, a rum and coke, doughnuts and a pillow because the front deck was getting a bit hard on the backsides. How good is he!?

Later that day, we headed downstream and came across team Barradise, with Kayla busy casting at some rocks chasing barra. It was hot and her legs needed more sunscreen, so her skipper Ben multi-tasked by keeping the boat on the spot and rubbing sunscreen on her legs. Ain’t that dedication?

Three teams consisting of three anglers fished the comp and this category was won by Cindy, Karen and Shaye after they captured nine barra. Jodie, Toni and I came second with our five barra.

The champion overall team was team Crazy Fish, with Lisa Huff landing a total of 5.03m of barra. The runner-up team was Primed Lines, comprising Cindy, Karen and Shaye, with 4.88m of fish. Champion angler was Lisa Huff and runner-up was Cindy Meyers with five barra measuring a total of 2.53m. Congratulations to all the winners.

Overall it was a fantastic event that was well run and organised by the Women That Fish committee. It actually blended in with the family holiday I had already planned and I’m so glad it did. For more information, visit the WTF Women That Fish Barra Classic Facebook page or you can always email me at h.abdy@bigpond.com

The event wouldn’t be possible without sponsors, so a big thankyou to them. And to those sponsors who attended, it was fantastic to meet you and talk about your products.

Helen is presently working and fishing around Oz, enjoying our country and venturing abroad to fish some amazing places. She has experience in most aspects of fishing: tackle shop sales and working charter boats but fly fishing for saratoga is her favourite pastime. Feel free to contact Helen via email: h.abdy@bigpond.com
Previous Great fish on the outer reefs
Next Hectic fishing on Hinchinbrook Island holiday