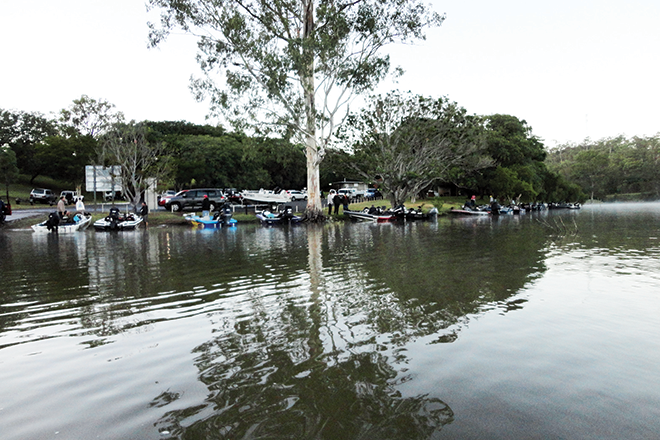 A large number of anglers turned out for round two at Cania Dam.

2017 Basstasstic Round 2 at Cania Dam

A GOOD number of anglers made the trip to Cania Dam on April 22 and 23 for the second round of Basstasstic qualifying tournaments.

Most anglers stayed at Camp Nowland and enjoyed the social gathering and daily barbecues that went with staying at the camp. The weather was a little cool in the mornings but in general perfect for bass fishing. Cania Dam was a bit dirty at the front but cleared as you neared the top of the dam.

The weekend saw plenty of quality bass caught, though I would say not as many as usual, likely due to the water colour from the recent in-flows. However, the weekend was all about Dallas Harch from Hervey Bay as he kept the pace up by continually measuring in good bass.

His plan of working the middle of the dam for big bass worked well and ensured his win with a score of 2433 points.
He took home $800 cash for his efforts.

Second place went to Jordon Riddle from Moree in NSW. Jordon worked the front of the timber and into the timber at the top of Cania Dam to give him a great result of 2407, which saw him walk away with a cool $500 cash.

Leroy Finch from Dalby managed to claim third place and $400 cash after he too worked the timber to get a great result of 2373 points.

The rookie section winner was Dave Howard from Kingaroy who took home the Austackle prize pack with 1885 points.
Second place was taken out by Shane Howard, also from Kingaroy, who scored 1524 points to win the Sludgie Lures voucher.

Dave Howard picked up the Evakool Big Bass for the weekend and the Big Bass cash pool worth $450 thanks to his 450mm fork length bass. The female angler prize went to Liz Johnson from Gladstone who won a $100 BCF gift voucher.

In the junior section, Aiden Whiteman from Gympie was the overall winner after scoring 1839 points.
Lane Thompson from Gladstone came in second with 969 points. 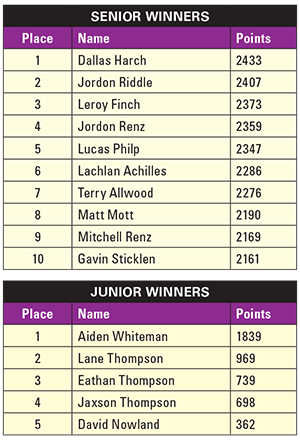