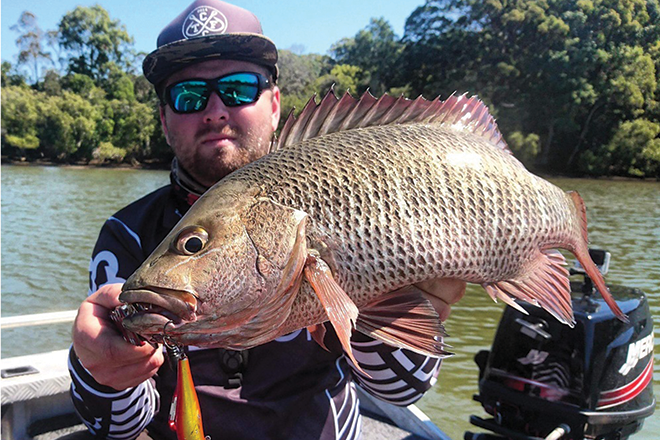 Brock Perry would love this early season form to run into the competition weekend.

IT’S that time of year again where anything red reminds you about mangrove jack season.

It’s time to swap the 4lb bream gear for 30lb jack gear and stop bouncing plastics over sandbanks for flathead and instead work on precision casting in readiness for that drag-shattering hit that gets the blood pumping like no other fish on the Gold Coast.

But most importantly it’s time to start trying to find a few jacks and hone your locations for Australia’s biggest mangrove jack fishing tournament this November. This November’s Mangrove Jack Anglers Competition runs from Friday, November 24 to Sunday, November 26, 2017.

You can fish any inshore creek or river between the Tweed and Brisbane rivers. This year’s tournament sees a couple of welcome changes that have a lot of fishers very excited. From now on, the competition will split into three divisions: Bait, Lures and Juniors (16 and under).

The breakdown of the rules will be listed on the indemnity form at sign-in. Pre-sign-on for the Mangrove Jack Anglers Comp at BCF Oxenford is encouraged not only to get a reduced admission fee and 20 percent discount on any fishing gear bought as a competitor, but also to get you out ahead of the crowd and on the water faster on Friday afternoon.

As always, the brag mats will not be released until 4pm on the Friday.We have been working hard behind the scenes trying to make this the best comp possible for the average mangrove jack fisho. Our prizes have been redistributed across more categories, enabling us to pour more sponsorship dollars into our lucky draw prizes held at the presentation at the best chicken parmy restaurant on the coast, the Coomera Waters Tavern.

Our grand prize will once again be a Beast Kayak Pack courtesy of Dream Kayaks, which will be given away along with thousands of dollars’ worth of fishing gear, vouchers and apparel. A top underground jack fisho recently told me it’s one thing to know where to catch jacks but another thing entirely to know how to catch jacks.

This is where our presentation is designed to help us all crack the code on how to get more reds on the deck this season. A major bonus is that the Gold Coast’s own John ‘The Jack Guide’ Costello is MC-ing the event and also offering two three-hour guided jack fishing sessions in his boat as lucky draw prizes.

One will go to a junior and one to a senior. Watching any of John’s DVDs is exciting enough, and having some one-on-one time with him as a jack tutor will solve some of those ‘how to’ questions you have been dying to know.

The usual suspects have been leading the way on social media, with awesome early season jacks coming in. With water temps hovering around 25C, the jacks are definitely warming into feeding mode. This early in the season I would be keeping my lure as tight as possible to structure because the jacks may still be a little sluggish and not wanting to move very far.

A lure that fish find offensive in their territory might also get a reaction, so something with a loud rattle, big splash or shiny reflection could be the thing that annoys a red enough to have a go. Remember to pre-sign-on at BCF Oxenford!

See you on the water for the Mangrove Jack Anglers Comp.