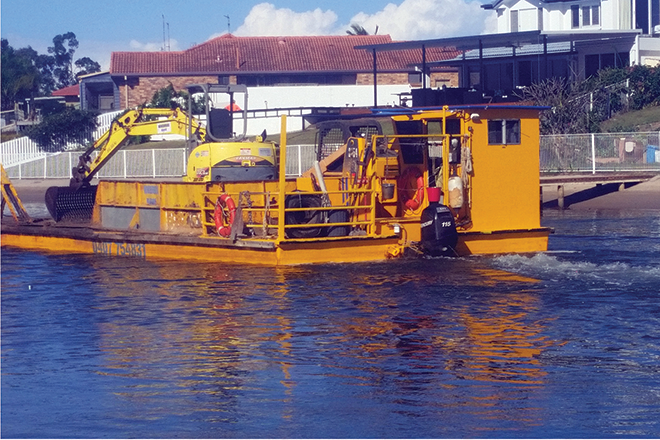 BLAZING sun or sheeting rain, the Gold Coast’s signature canals have to be constantly maintained, and much of that work falls to Wingbrook Marine.

With a fleet of four specialist craft – punts and a barge that can each cover up to 80km a day – the Wingbrook team works to rid the waterways of problem vegetation and rubbish as well as maintaining the canals’ crucial stone revetment walls. It’s hard, virtually non-stop work as manager Kevin Adshead knows so well.

“When cyclone Debbie hit earlier this year, it was simply flat-out for a month and a half,” he said. “We have a 40’ barge that acted as the mother ship for the other three just hauling out huge amounts of vegetation.” There’s also long-term maintenance. The canal’s revetment walls gradually subside and Kevin’s team has recently upgraded a 3km stretch, carting hundreds of tonnes of rock to raise the wall by up to a metre along the entire length. 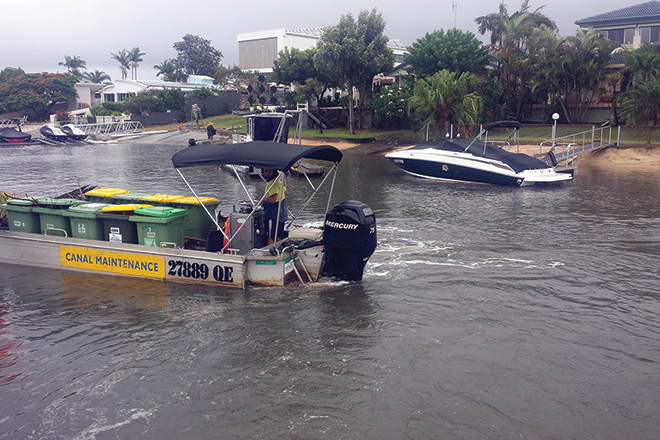 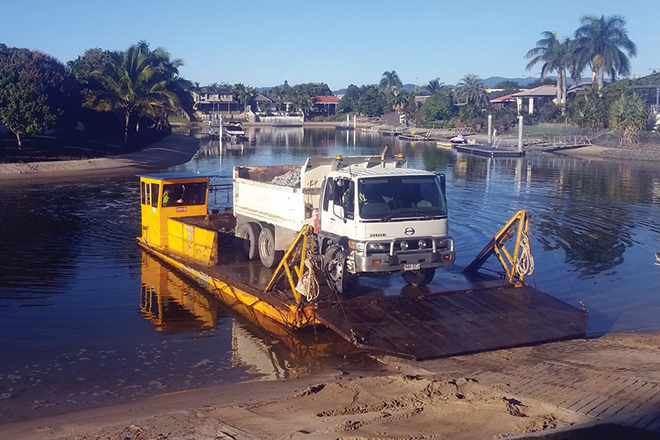 “The barge weighs 20 tonnes and can carry another 25,” Kevin said. “Often we’re loaded with rocks as well as a six-tonne excavator and three-tonne bob cat. “It’s a lot of weight. “For the past three years I’ve had a Mercury 115hp FourStroke pushing all that, which has now done 5300 hours.

“It’s all about torque for us, not top-end speed, but you just can’t beat that for reliability.” The engine is still going well and Kevin is only now repowering the barge with a 115hp Mercury SeaPro because its heavy-duty Command Thrust gearcase will allow him to run an oversized prop that will improve the boat’s handling significantly.

He’s also looking forward to the SeaPro’s fuel efficiency, although he’s been very happy with the numbers he’s been getting from his standard FourStroke. “When we work on a revetment wall we’re hauling 130 tonnes of rocks a day and we use about 105 litres of fuel a day,” Kevin said. “I talk to my competitors and they are getting nothing near that.”

Unbelievably, the 5300 hours notched up by the trusty Mercury 115hp FourStroke isn’t the record setter at Wingbrook Marine.
The company’s ‘work boat’, a 2m x 6m aluminium punt that is used to haul up to 17 wheelie bins of rubbish has a 75hp Mercury outboard that has been operating for 8500 hours.

That’s even more impressive when you hear the engine goes from forward to reverse close to 200 times a day. “It’s never given us a problem, so I’m just going to leave it and see how far it goes,” Kevin said. “It starts every day and keeps working, so let’s see what happens.”
Kevin runs plain black covers on his outboards, which means he’s often asked about his engines.

“Other people on the waterways are regularly asking what engines we use and how they are going,” he said. “Plenty of fishers have never seen anything like these numbers, and when they don’t believe me it’s all there in the computer so I can show them. “I would have sold a lot of Mercury engines around these parts I think.

“I used to swear by another brand of engine but that all changed because there’s just no comparison.”

To find out more about barge hire from Wingbrook Marine, go to wingbrookmarine.com.au