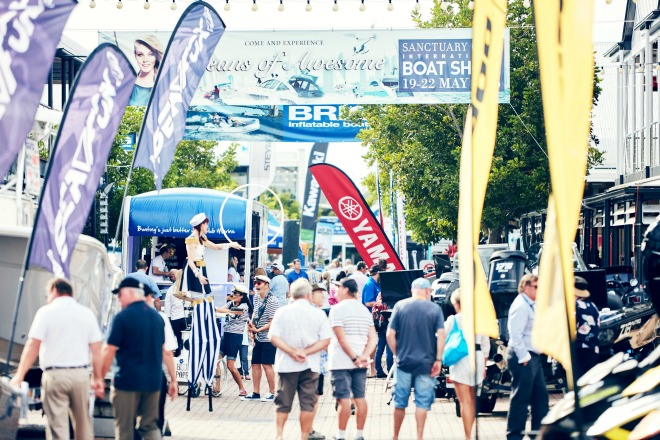 SANCTUARY Cove International Boat Show has officially launched its milestone 30th anniversary showcase, to be held from May 24 to 27, 2018.

From November 21, marine brands are invited to join the 2018 edition of the southern hemisphere’s premier marine event, home to a stellar display of the latest products and innovations in one spectacular location. SCIBS general manager Johan Hasser said the team was thrilled to be planning a massive Show for 2018, buoyed by the spirit of exhibitors already working towards their displays for the landmark 30th year. “30 years is a milestone we are proud and excited to share with our exhibitors, sponsors and supporters across the industry,” Mr Hasser said. “From 100-plus exhibitors in 1989, to the world-class showcase it is today with more than 300 quality exhibitors from Australia, New Zealand and Asia, plus visitors from around the world, it’s fair to say we’ve come a long way.”

As well as attracting upwards of 40,000 visitors, SCIBS has grown to become one of the most important B2B events on the Australian boating calendar, hosting international delegations from every continent in the wake of the ASMEX conference and thanks to the support of the Gold Coast City Council and the Queensland Government.“Many people tell us they plan to travel down under to experience SCIBS and see for themselves the ingenuity and innovation the Australian marine industry is renowned for,” he said.

Celebrating 30 years alongside SCIBS is a loyal band of exhibitors who took a punt on a promotional concept, executed by the dynamic trio of Barry Jenkins, Harry Davis and his wife, Marilyn – all of whom have a long association with the event. Barry Jenkins, or “Mr Boat Show”, remains actively involved to this day as the charismatic ambassador for SCIBS and in his role with AIMEX-Superyacht Australia. Boating industry legend and founder of Maritimo Bill Barry-Cotter was among the first exhibitors at the inaugural Sanctuary Cove International Boat Show in 1988 and remains one of the Show’s strongest supporters.

“We have been involved from the outset and I believe it is the best boat show when you consider all its elements, including the location and all that Sanctuary Cove has to offer visitors,” Mr Barry-Cotter said. “It has become very professional and obviously larger over the number of years Maritimo has been exhibiting. It’s an open market for people who are looking for a large luxury cruiser or some fishing gear for their tinny.”

With the strongest presence on-water for many years, and now with its Gold Coast HQ situated in The Marine Village, Maritimo invests significantly in SCIBS each year.
For 2018, Maritimo promises its familiar blend of stellar motor yachts, some new models and “plenty of surprises”.

Northside Marine’s dealer principal Greg Nickerson is a 29-year veteran of SCIBS and said he was thrilled to be a part of the 30th anniversary of such an iconic event. “We have been established for 52 years in Brisbane, so SCIBS has been a vital showcase for us and the brands we represent exclusively in Queensland, such as Whittley, Surtees and Stabicraft to reach our Gold Coast customers,” Mr Nickerson said. “SCIBS has evolved as the marine industry has evolved, catering to our changing needs and always supporting Northside Marine to enable us to put on our best presentation each year.”

Mr Nickerson said what sets SCIBS apart from other major Australian boat shows was The Marine Village’s vibrant atmosphere, a diverse and innovative product offering, and family entertainment. “It’s a great venue for exhibitors and show visitors. The pristine Marina, together with The Marine Village, creates a unique environment that cannot be replicated by any other venue,” he said. “Now, more than ever, a good mix of trailerable boats and the big boats is important for promoting the boating lifestyle and making it accessible to everybody.”

Superior Jetties CEO John Hogan is another foundation SCIBS exhibitor and will also be celebrating 30 years in operation next year, having carved out a global reputation for floating solutions for marina construction, floating pontoons, jet ski docks and boat lifts. Mr Hogan said across the past three decades, SCIBS had grown in stature and importance to the boating and broader marine industries. “It has grown to have more lifestyle impact with cars, leisure products, food and boutique shopping all playing a part of The Marine Village atmosphere that makes it one of the world’s great boat shows,” Mr Hogan said. “SCIBS has a strong international reputation, which has allowed us to show our wares to potential export clients on the water.” For Superior Jetties, SCIBS represents the best opportunity to “meet customers face-to-face”.

“SCIBS is a great chance to not just sell, but gain feedback, advice, mentor, market survey, price check and generally see an active marketplace in action in real time,” Mr Hogan said. Dean and Ryan Leigh-Smith are third generation boaties, who have grown up with Sanctuary Cove as their “backyard” their entire lives. SCIBS holds a special place in their hearts, and now their business calls the Sanctuary Cove Marina home.

“The Show has been a continual evolution since its first edition that the Leigh-Smith family was involved in all those years ago,” Mr Dean Leigh-Smith said. “What started as primarily second-hand boats and some local brands to promote Sanctuary Cove as a new development has sure evolved into an amazing event.”

For the Leigh-Smiths, Sanctuary Cove is the ideal venue to showcase the enviable benefits of the boating lifestyle. “Leigh-Smith Yachts, which represents Alaska, Hampton, Endurance and Fairline Yachts (QLD NT), chose to base ourselves here in 2014,” he said. “You’ll often hear me referring to Sanctuary Cove as a ‘year-round Boat Show’, with brands like Horizon, Maritimo, Integrity, Catalina and more all based here. “It’s a Show that is shorter by comparison to others, but that adds to its appeal: four days, in and out, sensible hours and the opportunity to meet industry colleagues, friends and clients after hours and enjoy the Village atmosphere.” Dean Leigh-Smith said SCIBS was the ultimate platform to launch new products for the year ahead.

In 2018, the Leigh-Smith family will be celebrating its 54th year in the business, and they promise a sensational display that will showcase over $12 million in boats. “I hope to see all the people both past and present who have made it an amazing event in attendance and recognised for their great work in getting to 30 years,” he said.

To register as an exhibitor, visit www.sanctuarycoveboatshow.com.au or phone the Boat Show office on +617 5577 6011. 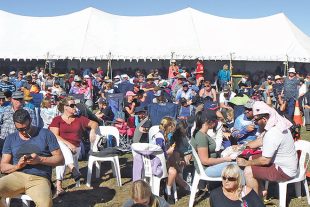