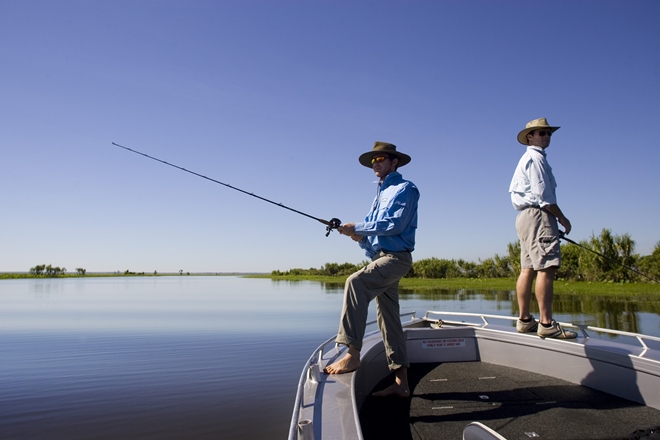 BARRAMUNDI are the most iconic of all the native sportfish in Australia and the ‘it fish’ in the Northern Territory.

When you add a million dollar price onto one of their heads, the thrill of the chase is so much sweeter for anglers fishing Australia’s Top End.

The Territory has the largest numbers of Barramundi in the whole of Australia, so time out chasing barra for fun becomes a ‘reel’ family adventure from Darwin to Kakadu, Katherine to the Tiwi Islands and in Arnhem Land.  These shiny silver slabs are prone to leaping out of the water and taunting the recreational anglers who come out in force during the season chasing the thrill of bagging a big one or THE big one – the million dollar fish. 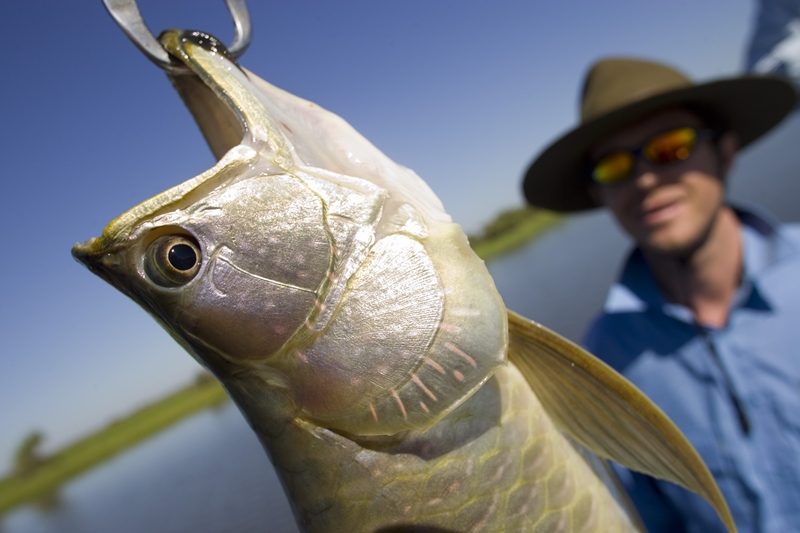 While the fish vary in colour, there’s no mistaking their pointed head – complete with concave forehead – large jaw and, in these parts, a good-sized barramundi can weigh between 10kg and 20kg and reach lengths of around a metre.

With a cool million bucks up for grabs in Tourism Northern Territory’s Million Dollar Fish promotion, locals are understandably a little cagey about revealing their sweet fishing spots, but they don’t mind sharing a tip or two to help fellow fishos bag a big one!

Quality equipment is essential in the tropics with the harsh environment and hard-core sport fish – think bass fishing on steroids while standing on the surface of the sun and you’d be close!

Although there has been a slow gradual movement towards lighter line and rod choices in recent years, in the Top End the de rigueur barramundi fishing outfit still consists of a strong, up-spec, baitcaster teamed with a quality and powerful overhead rod. You will fit 150 yards of 30lb braided line quite easily on most modern baitcasters and this should be considered the minimum. For the uninitiated, 150 yards of line might sound like overkill but line is definitely one of those items you don’t want to run out of mid-fight.

Barramundi are very lazy fish at the best of times and downright stubborn and moody at their worst. With this in mind, lure depth and presentation is paramount over any other variable, including colour. Those in the know say you’d be much better off to be bouncing the right depth but ‘wrong’ colour lure over the target structure than aimlessly pulling in a lure that might look the part, but is not reaching its target.

This is why most serious Top End fishos will have a selection of the same or very visually similar lures, but in different depth selections, to suit the tide or location you are targeting.

Local tip: If you’re trolling or flicking at structure and not hitting it with your lure presentation, you are really wasting your time.

If laid-back bait fishing is more your style, try floating out a barra lolly (small pop-eye mullet) on a decent-sized circle hook. This particular technique requires the use of a cast net to help collect your mullet from along our coastline and the circle hook will help you avoid gut hooking any undersized fish in the hunt for the million dollar fish.