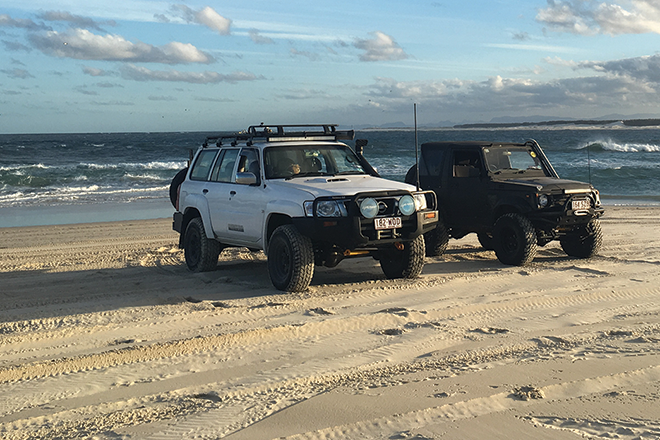 The author and Dean parked at Jumpinpin.

THIS month we dive into our exploration of North Stradbroke Island.

Straddie is a pristine paradise loved by many in the four-wheel-drive community. This trip began the same way many do – with a good morning feed at McDonald’s. Once fuelled up, we headed straight to the barge and boarded.

As with most beaches in Queensland, you need a permit to drive on the beach at Straddie. Lucky for us, a permit for beach driving on North Stradbroke Island is only $43.75 for a year and can be bought at the information centre located at Dunwich, near the barge’s landing point.

Those who have been four-wheel-driving on the beach before will know the importance of tide times. However, something many people, including us, overlook is the height of the tides. When buying our permit, we were advised that Straddie had been experiencing king tides in the past week, and the day we arrived was no different. No problem, right? Just time your travel around the tides. Well sadly for us, we had timed our trip based on regular tides, and we had two and a half hours before high tide. We already knew that beach driving on Straddie was not permitted one hour either side of high tide.

What we didn’t know was during periods of king tides, beach driving is not permitted within two hours of high tide. That meant our hour and a half window to camp was now reduced to half an hour – the race was on. Once we dropped down onto Main Beach, we realised exactly how tight this run would be, dodging wash-outs, soft sand and rogue waves. We all knew the consequences of getting bogged could be catastrophic.

Thankfully, we made it to our campsite entrance before the prohibited driving times and were able to set up and enjoy the start of our week-long holiday. The next morning, the crew decided it was time to venture south to Jumpinpin for a quick fish and relax in the sun.

With perfect weather, this morning looked to be one to remember, and boy, was it one morning we will never forget! We took the inland track as far south as we could before popping down onto the beach for the short trek to the southern tip of North Straddie. As we were travelling with a friend who had limited off-roading experience, our mate Ben decided he would get bogged. Please remember, we hadn’t been on the island much longer than 24 hours at this stage!

Unfortunately, Ben bogged his LandCruiser in a horrible spot. He was too close to the water to snatch him forwards and we were forced to pull his big rig out backwards. Now, Cruiser owners will know what we’re talking about when we say ‘drivetrain weakness’.

Well, Ben found his weakness in a big way. Bang! The Cruiser decided it was time to clean its teeth… goodbye front differential. After diagnosing the broken front diff, we unlocked the front hubs and were down to two-wheel-drive.

This wouldn’t normally be an issue, except this was Ben’s unlucky day. After a rubbish run later that afternoon, Ben was cruising along the beach while we were exploring the northern end of the inland track. With my music pumping as we casually pottered along, loving the scenery, I was so far in my own little world that I missed a number of calls over the UHF. After about 10 minutes of calling me, I finally noticed and responded.

To my surprise, I discovered Ben’s rear diff had also decided it was time to give up and he was stranded on the beach with a rising tide. Soon enough, our GU Patrol came to the rescue and skull dragged the heavy Cruiser back to camp.

This was one recovery to remember, and still to this day I am deeply impressed with how the GU performed when pulling the Cruiser through the soft sand and along the inland track back to camp. With the Cruiser unable to transfer any drive to the wheels, Ben had no other option than to have a mate source and bring another diff centre over to Straddie – introducing our saviour, Dean from Lorian Automotive.

Dean’s a close mate with a massive heart who owns a workshop in Tweed Heads. Through some networking on the mainland, we managed to source a diff centre for Dean to bring over on the barge. He then helped Ben fit the new centre right there in the middle of camp! We’ve spoken a few times now about travelling along Main Beach’s inland track, and for those who haven’t yet done so, we highly recommend it.

This track runs along the back of Main Beach’s campsites and makes for a relaxing, fun and extremely scenic drive.


We especially loved this track in the late afternoon for chilled-out driving to experience the serenity and of course the wildlife.

Unfortunately, a number of tracks on Straddie have been closed of late, however the spectacular North Stradbroke Inland Track, which connects East Coast Rd with Alfred Martin Way, is still open for business.

This track follows North Stradbroke Island’s ridges and provides astonishing views of Moreton Bay. We spent a morning exploring Point Lookout and the surrounding hot spots and not only was the view to die for, but we also spotted a couple of sea turtles and a pod of whales.
After exploring the Point during the morning, we headed up onto North Stradbroke Inland Track.

We pulled up at a beautiful lookout about halfway along the track that is definitely worth a look, however, be aware that it is a steep and sandy climb to the top. The North Stradbroke Inland Track certainly put on a show and with these kinds of views the only thing we regret is not taking a good pair of binoculars!

After a week of relaxation, exploration, fixing cars and numerous failed fishing expeditions, it was time for us to head back to reality. Being the only car from the group still left on the island, with two hours to spare until our barge left, we decided to go for a quick run up Flinders Beach – what a spot!

With heavy surf on Main Beach and respect for the rules regarding pets, our dog Max had so far missed out on going for a swim. However, this last day on Flinders Beach seemingly produced the goods, topping off the week with a beautiful spot to go for a swim, so we drove alongside a small gutter of water high up on the beach.

With the excitement of swimming with Max and no indication of bog-worthy sand, we pulled up on the bank. Suddenly and without any warning, the rear end of the GU dropped, with the front following quickly afterwards.

I had never felt such a sensation before and nor do I ever want to feel it again. My partner Sammy and I simply looked at each other in shock and quickly got out of the car. Yep, the GU had sunk up to its door sills. Being late on an overcast Tuesday afternoon during off season, there was no one in sight and boy did we feel alone. After the reality of the situation sunk in, it was all hands on deck to get the big girl out in time for our afternoon barge.

I began to dig out the sand around the wheels while Sammy went for a lonely jog up the beach to find someone to pull us out. With no signs of anyone around, Sammy returned to help with the recovery.

Annoyingly, the sand under the GU was saturated, so each time we shovelled sand out it quickly filled back up. Our only hope was a good snatch out of the bog. After 45 minutes of digging and searching, a Mitsubishi Delica pulled up and the owner offered a hand. However, the Delica had no recovery points, and although old mate offered to pull us with his tow ball, we chose to thank him for the offer and send him on his way. For those new to 4WDing, please make sure you spend the money on quality recovery gear and never ever accept a recovery if it involves pulling off the tow ball.

Tow balls are not rated for snatching vehicles and in numerous instances have become miniature cannonballs and killed people. If you do not yet have suitable 4WD recovery gear, give me a call at Flexible 4WD Solutions (0401 221 596) and I will get you kitted out before your next trip.

Luckily for us, another fourby came by shortly after and offered to help. With the right gear and one good pull, we were out and safely on our way to the barge in time to say goodbye to paradise.

I am a keen off-road enthusiast and driven entrepreneur from Brisbane. Based in southeast Queensland, my mates and I travel all over the east coast of Australia chasing extraordinary tracks. For expert advice and all the best gear at incredible prices, check out my business page at www.facebook.com/Flexible4WDSolutions
Previous Atomic Hardz Vib 70
Next Be a mate and check your bait before you go fishing