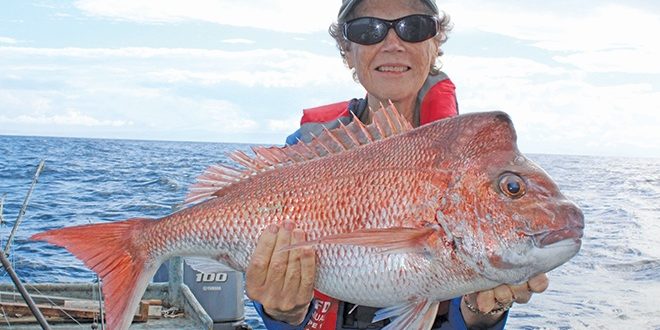 Helen Dobson caught this 6kg snapper within minutes of arriving at the reef.

A successful snapper sortie with Mum

It had been a while since I took my mum out fishing. Last time she came out with me we caught a few teraglin, discovered the leatherjacket were too thick to fish successfully and then came across Migaloo the white whale and spent an hour with him. With a good forecast recently, we planned another adventure together. A phone call to a couple of friends who were already out confirmed that the conditions were good, so I was looking forward to a nice smooth run to a spot about an hour from the bar. snapper sortie Mum

Halfway there we hit a rain squall and conditions deteriorated badly. Thinking it might only be short lived, we pushed on but it didn’t improve. Eventually turning up at the spot, I showed Mum how to feed a bait out and within a minute she was getting a run. Flipping the bail arm over, she set the hook and soon had a 6kg snapper in the boat. Despite the rough conditions, I was glad we had pushed on because the fish were biting and we were getting a fish every drop. snapper sortie Mum

After several nice snapper, we moved to a different spot and snapper were on there too! We caught a few more and left them biting to do a bit of whale watching. The whales put on a show and as we headed home the travelling conditions improved greatly, so all in all it was a great trip out with Mum. And no, we didn’t catch a single red emperor. snapper sortie Mum

This comment is in reference to the fact that a couple of my articles over the past year have made mention of red emperor – last month again as a case in point. Somewhere gremlins have got in the system and changed my words. It’s all good, nothing and no-one is perfect, I just thought I would clarify that while we do occasionally get the odd juvenile red emperor down here, they are far from common and definitely not a target species. snapper sortie Mum

Snapper have dominated catches lately as you would expect. Most of these fish are coming from out wide where conditions haven’t been easy, as there has hardly been a day without fairly strong current. Fortunately, the fish have been in good numbers and working with the current has been possible.

The inshore snapper season has been a complete flop despite showing promise early on. I’m not saying you won’t catch one, but they have been very light on. The next few months can be lean offshore as the northerly makes fishing the wider grounds difficult, and in close is typically slow through spring. On the other hand, the rivers have begun their change over from winter to summer and characteristically fish quite well between now and Christmas.