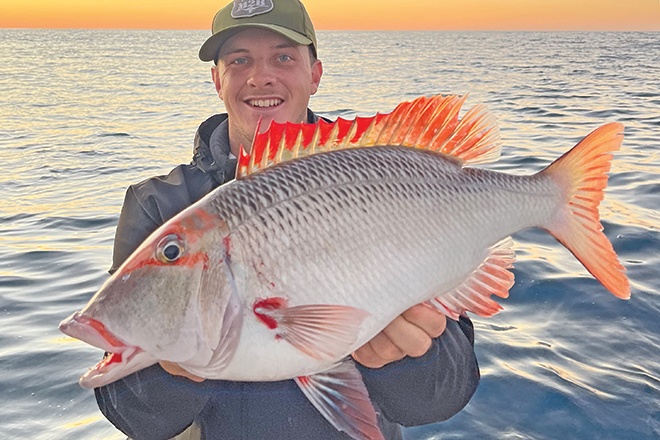 A nice redthroat emperor was a great way to start the day.

A few reefies for a feed – locally and up north

With the seasons rolling along, it won’t take long for the water to warm up in preparation for the onslaught of pelagic fish. The whales have been heading south for over a month now and the first few chirps of cicadas in the trees is a sure way to tell that warm weather and water are on their way. reefies locally north

While you could be forgiven for dusting off the spin outfits and marlin lures, there are still plenty of fish being caught on the local reefs at the moment. Snapper have been on the chew with loads of solid knobs being caught along the Gold Coast. With only a slight current, there is no better time to get a few. reefies locally north

The border being closed and NSW still in lockdown at the time of writing means the Tweed reefs will be getting a well-earned rest. This will bode well for the next few years once normality hopefully returns. Along with snapper, some great pearl perch and yellowtail have been caught on the 36-fathom line and deeper. reefies locally north

All this fishing is getting me frothing, as poor old Aquaholic suffered its first breakdown in 17 years of trouble-free boating – it was catastrophic with the motor being unsalvageable. A new Honda will be put on sometime in the next month or so, with the crew from Silver Service Marine at Burleigh Heads doing the work – and possibly a few extras to modernise her with some NMEA2000 additions. reefies locally north

A trip or two north to Seventeen Seventy after she’s run in may be in order, especially with the insane fishing some fishos have been having up there. Reports of great catches of trout and red emperor by the crew from Silver Service Marine, who took some well-earned rest and relaxation, had Mitch and a friend head up in good conditions a week later to grab a feed of reef fish. They weren’t disappointed – rewarded for their hard work with trout, redthroat and red emperor, and a couple of stonker squid.

Heath has been fishing since the age of three and grew up fishing the mighty Georges and Hawkesbury rivers.
Previous A successful snapper sortie with Mum
Next Techniques for catching top quality flathead