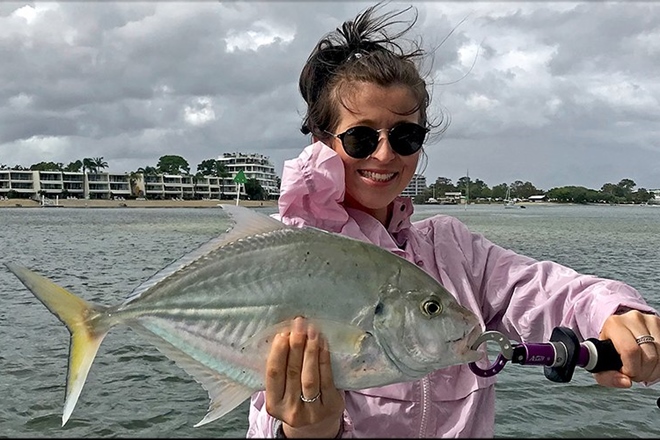 Helen Cooper from Melbourne with a long nose trevally. Caught and released in the Woods Bays using a whole prawn bait. Photo: fishingnoosa.com.au

Mangrove jacks have been plentiful in the Noosa River, good numbers of jacks have come from the jetties and sand bags around the Munna point and woods bays areas. Baits have been the most productive, gang hooked pilchards and mullet strips, rigged with 15-25lb Dogtooth fluorocarbon leader has been the best technique for landing these fiery red devils. Paddle tail soft plastics in the 4inch size have also been doing the trick, the Z-man and River2Sea Chasebaits range of soft plastics are well and truly up to the task with white, red, black & gold being the popular colours.

Families have been enjoying the Noosa River with plenty of quality whiting from the lower reaches. Gympie Terrace, the Dog beach and the Frying pan have all produced great catches of fish. Live worms baits, yabbies and pealed prawns have all helped anglers catch some awesome fish. Still good numbers of flathead on the outgoing tide from around the frying pan and in the woods bays. Gladiator prawns have been doing most of the damage as well as the 140mm squidgy wrigglers attracting attention from some of the bigger lizards. Outstanding numbers of Golden Trevally, GT’s and Queenfish have been reported throughout the entire river. Prawns, Pilchard and Yabbies have been the best baits for these fish. When lure fishing anglers have had success on Storm Chug Bugs,  Strada Viral, and 2-3” Curly tail grub style plastics, Fuze triple tail and Prawn heads with 1/8th jigheads, the hottest sessions have been coming from around the Woods bay and Jet Ski run areas. Mud crabs are being caught along the mangrove edges toward Lake Cooroibah and around the Jew Hole, with mullet heads and frames being the best choices for bait.

Beaches such as Third cutting toward Teewah, Sunshine and Castaways have been producing good numbers of Small dart, Whiting, Flathead and Bream. Lightly weighted baits like; live worms and strips of Mullet have been working well. Try using Whiting Wacker rigs with a small snapper sinkers attached to the bottom while fishing the shallows in close, if you want to get into the deep gutters further out, use larger paternoster rigs fitted with a surf popper on the top dropper, this technique will allow you a chance at catching a few Tailor during your fast retrievals through the surf.

At both Lake MacDonald & Borumba the anglers who got out this week have reported that the better fishing has been on the low light periods of the day (early mornings and late afternoons), using a range of surface lures; Tamico soft shell Cicadas, Lunker Hunt pocket frogs and Strada viral lures were the favourite weapons of choice by most anglers. The Strada Treka Jerk baits also worked well for fishing holding up in heavy cover, and the Zerek Chilli Padi micro jigs enticed a few fish to bite well in deeper sections of both dams.

Now for all the  latest information log onto www.fishingnoosa.com.au for up to date bar and fishing reports, don’t forget to drop into Davo’s Tackle World, Davo’s Boating and Outdoor in Noosa and Davo’s Northshore Bait & Tackle at Marcoola to find out where the fish are biting, and remember Tight Lines and Bent Spines!