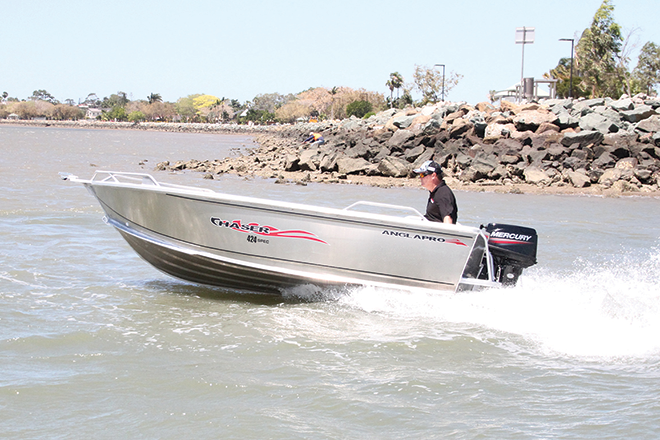 Anglapro’s Chaser 424 Spec has plenty of get up and go even when paired with the minimum 30hp Mercury TwoStroke. The hull is rated to a massive 50hp.

ANGLAPRO is certainly a boat brand to keep an eye on.

This Australian boat company “specialises in no-nonsense fishing boats that don’t pretend to be pretty or trendy”. A recent test day with exclusive Queensland dealer Brisbane Marine allowed me to put a tiller-steer Anglapro Chaser 424 Spec through its paces in trying conditions off Scarborough.

Straight off the bat I’ll admit I was unexpectedly enamoured with this simple little boat. My money-no-object ideal boat has long been a 6m-plus, fast, offshore-ready rig (like many others, I’m sure), but when reality hits and I realise I’m not bathing in $100 notes, a boat priced from $10,000 drive away starts to make a lot more sense.

And fancy that, you can have an Anglapro Chaser 424 Spec from Brisbane Marine sitting in your driveway for just 10 large. So what do you get for the dough? A fair bit, as it turns out! Let’s run through the standard inclusions: raised and carpeted casting platform with storage hatch; carpeted flat floor; full-length side pockets; large roto-moulded anchor well; bow rails; bowsprit with roller; rear step; transducer bracket; and more still.

Having perused the Chaser’s features, Dave from Brisbane Marine and I launched out of Scarborough harbour and were promptly greeted by a howling northerly wind. Bloody northerlies are a pain when fishing but on this day I decided we had great weather for truly testing a boat.

With waves cresting in the shallow water, we pointed the nose northwest and took the chop across the front quarter. The Chaser 424 Spec’s hull benefits immensely from large reverse chines and a standard spray deflector at the bow but even these innovations couldn’t keep us totally dry, with the 25-knot wind curling some spray up and over the sides. A simple solution was to hit the waves head-on, which resulted in the reverse chines and spray deflector working together to kick the spray wide enough to keep us dry.

Even more helpful was giving the 30hp Mercury TwoStroke full curry and skipping over the top of the waves, either going with or against them. And skim it did! The little 4.25m tinnie absolutely hooked considering the Chaser’s solid 3mm construction, the two blokes on board, a full 25-litre tank of fuel and crap conditions.

This was all with the minimum 30hp mind you – the Chaser 424 is rated to carry a whopping 50hp two or four-stroke thanks to an extra-thick transom. Jeez, this thing would be a proper weapon with a 50hp motor on the back. As it was, later in the day Dave and I jumped in an Anglapro Sniper 454 Pro and with just one person in the Chaser it easily kept pace with the bigger boat, which was running at 47km/h.

Plenty of punch for the dollars is an understatement. Speaking of value for money, all Anglapro boats leave the factory with a stunning five-year warranty. This far exceeds the warranty commitments of other leading aluminium boat manufacturers and clearly demonstrates Anglapro’s confidence in its product.

In the nasty conditions the hull felt as solid as a rock and it really impressed with stationary stability to rival significantly larger boats. A generous 2.08m beam no doubt plays a part here, as do the reverse chines and flat attitude at rest.

This flatness continued when accelerating onto the plane and once cruising on the plane, even with just one person sitting down the back on the tiller. With the nose sitting flat while hammering along at 45km/h into the chop, the Anglapro Chaser 424 managed to walk the fine line between a stable and soft ride. Swinging side to side on the tiller while under way saw the Chaser cutting neat S bends with minimal cavitation and leaning from the hull.

The driving position was comfortable, with grab handles on the wide side decks providing something solid to hang onto through the turns. Though the bench seats are un-padded as standard, seat cushions are optional, and if it was my boat I’d stump up the extra cash for a bit more padding.

Upon returning to the ramp I held the Chaser beside the pontoon while Dave and Tony loaded the Sniper back on the trailer. Sitting on the pontoon, I was giving the idea of buying a Chaser 424 serious thought. What a great little boat for the money!
While not my dream boat, it also wasn’t a massive offshore rig, meaning it would easily tow behind my Toyota sedan.

I haven’t bought one yet but the thought is still there. The Anglapro Chaser 424 obviously made an impression and if you’re in the market for a genuinely affordable 4-5m tinnie I’d suggest checking Anglapro out.

Daniel is BNB's subeditor and occasional fish-wrangler. If you've got a great story or at least an idea for one, flick Dan an email at editorial@bnbfishing.com.au
Previous Formosa 660 Tomahawk Offshore Hardtop review
Next Samaki Zing Xtreme Swimbait rods