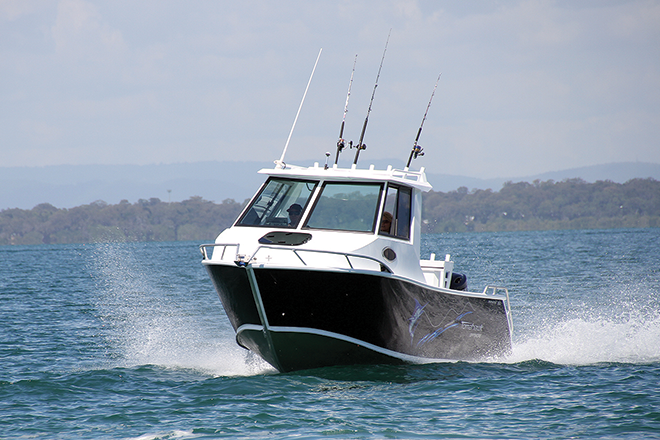 Designed and built to fish, the 660 Tomahawk will also double as a family boat.

As a buyer, more often than not you want the biggest boat with the most features for your buck, but it is important to look further than just the name of the boat so you get exactly what you are expecting.

If you are seriously looking at spending your hard-earned cash, make sure you do your research and find out the exact specifications of the boats you are comparing. I recently tested the Formosa 660 Tomahawk Offshore Hardtop, which boasted an overall length of 6.75m including the bowsprit.

Combine this with a massive beam of 2.5m and you end up with a very substantial boat, which I confirmed as I ran my eyes over it for the first time at the Raby Bay boat ramp. My first impression was it was big for its advertised size and had a massive amount of deck space, which would make it ideal for multiple forms of fishing.

It could easily handle four or five reef fishing anglers offshore while being equally adept at trolling for mackerel, marlin and other speedsters with plenty of room to fight the fish. However, you could also convince the better half that it’s the perfect family boat with a large cabin providing protection, cushioned seats built into the seat bases and a cushioned rear folding lounge.

The 660 Tomahawk could also happily tow a few skiers, wakeboarders or tubers around. While the Formosa 660 is on the larger side for these sort of activities, the economical 200hp four-stroke Suzuki would still make it an affordable day on the water. And if the wind blew up after you had finished your water sports, you would have the benefits of a solid boat to get you home in safety.

And by solid, I mean a high-tensile 5083-grade 5mm bottom with 4mm sides and longitudinal stringers and an underfloor sub-frame welded to the hull. Combine this with the self-draining deck, a standard feature of the Tomahawk Offshore range, the high-tensile hull and substantial reverse chines and you have a serious platform that will handle a mix of conditions.

The Tomahawk Offshore also features a transom door with dive ladder to make entering the boat from a pontoon, beach or the water very easy. Hydraulic steering is standard for the Offshore range and makes handling this big rig an enjoyable task.
The build quality of the entire Formosa range is top-notch, with plenty of pride going into each rig, and the test boat was testament to this.

You also get a heap of standard inclusions such as an aluminium anchor well, fully welded side decks, large side pockets, sounder bracket, box pedestal seats, rod holders and lots more. It is worth checking out the full list of inclusions in the Offshore range at formosamarineboats.com.au

Even with this extensive list of inclusions and optional extras, it is still possible to customise your rig further with specific modifications. Adding these custom touches really allows you to personalise a rig so you get exactly what you are after.

In saying that, a lot of thought has gone into the design and layout to make it a very practical boat. For example, the cabin area is seriously large, with the bunk in-fill allowing you to sleep two or three people. The open entryway allows great access and loads of ventilation.

Under the bunk cushions is plenty of storage for larger items such as life jackets. One compartment on the test boat was sealed off and could house a portable toilet if desired. A clean layout made moving around the boat easy, and with that wide 2.5m beam and large reverse chines, stability wasn’t a problem.

The two seat boxes have loads of storage space and could even accommodate a tackle tray compartment. At the rear of the test boat, the folding lounge was a cinch to lower and raise and the large bait board provided a practical work station at a good height in addition to being fitted with four solid rod holders.

More rod storage was accessed via the rocket launcher on the hard top that could house seven rods, giving you ample places to keep rods out of the way yet within easy reach. The hard top also featured grab rails to assist in walking around the cabin to the bow or when jumping up on the side deck to grab a rod from the rocket launcher.

Performance wise, the Formosa 660 Tomahawk Offshore had plenty of horses with the 200hp Suzuki strapped on the back. While rated to 225hp, the 200hp motor definitely did the job, though you might get a touch more top-end speed out of fitting the maximum horsepower.

The 200hp Suzuki delivered good numbers and at 4000rpm pushed the Formosa 660 along at 40km/h. A bit more throttle saw the revs climb to 4500rpm at 48km/h. Interestingly, fuel consumption was around the same for both speeds at 1.6km per litre.
Even though this is a very solid rig, it still hit 65km/h at WOT with a pretty impressive 1km per litre fuel consumption figure.

The boat handled well through the entire rev range, either comfortably sitting or standing at the helm. Overall, the Formosa 660 Tomahawk Offshore presented very well and had the performance to match. While I predominantly see this as a hard-core fishing machine, as I said, it could readily double as a family boat.

With the addition of a camper cover (which can be fitted to the existing sail track in the hard top), it could also do duties as an overnighter for the family. The test boat was priced at $91,990, which includes a host of standard features that you really need to see to believe.

For more information on pricing and what is included in the comprehensive BMT package, give the team at Australian Marine Centre a call on 07 3808 7333 or check out amcboats.com.au