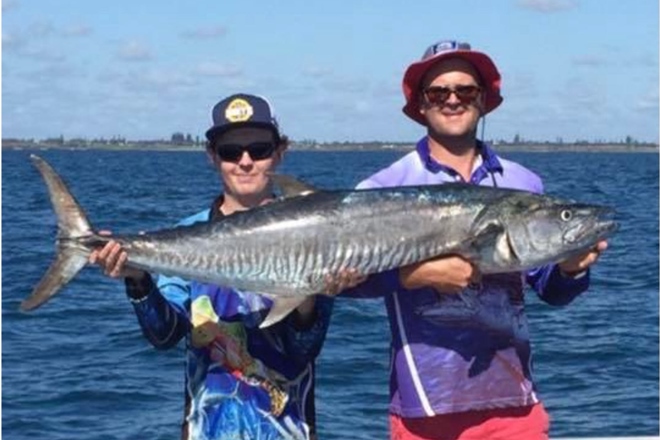 Well, it doesn’t usually happen, but the weather around the Bundaberg area was better than the predicted forecast last weekend.  A lot of anglers made the most of the good conditions and took the opportunity to head offshore.  Let’s hope this happens again this weekend, because some of the fish caught in close was very impressive and fishos will be keen to head offshore again.

It’s awesome to see massive Spanish mackerel right along our coastline at the moment.  Spanish mackerel between 25-35kg have been testing anglers’ skills.  Trolling lures such as the Samaki Pacemaker 180 and Halco Laser Pro 190 at around 6 knots has been working a treat on these hard-fighting speedsters.

All of the local rivers have cleaned up nicely and are full of bait fish and small to medium prawns, which have been attracting big predators to our rivers and creeks.

Baffle and Littabella Creeks are both fishing and crabbing well.  Nice flathead, trevally, estuary cod, bream and whiting have been caught around the mouths of both systems.  Further upstream some nice mangrove jack, grunter and barra have fired up with the warmer days we’ve had this past week.

The Kolan and Burnett Rivers are also fishing well.  Some of the bream, especially in the Burnett at this time of the year are fantastic.  Bream up to 40cm have been common captures along the many rock walls in the Burnett, and on the structures in the Town Reach.

Let’s hope this continues and it’s a cracker bream season as the cooler months approach.

On the fresh water scene, two competitions were held last weekend.  Over at Boondooma Dam the Annual Family Yellowbelly Fishing Competition was held and by all reports, heaps of bass and big yellowbelly were caught and heaps of fantastic prizes were given away.

Closer to home, the Annual Bill Proctor Memorial was held at Lake Gregory with the Bundaberg Sports Fishing Club.  The biggest bass weighed in last Sunday was 52cm with a lot of bass in the mid-40cms.  This awesome little impoundment never disappoints as the Australian bass can be caught on many different techniques.