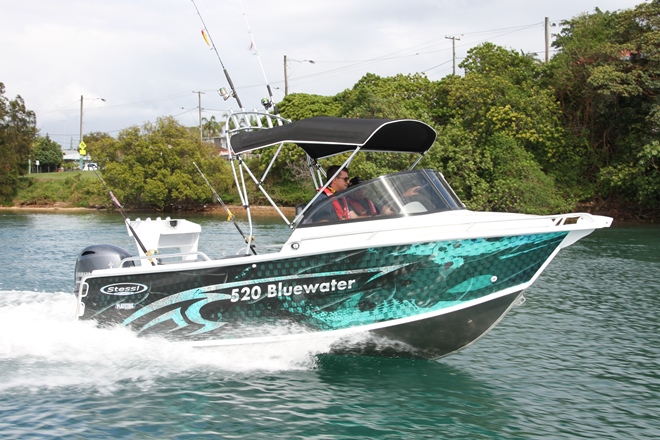 “DAMN, that’s a good-looking boat” were the first words out of my mouth upon laying eyes on the 2018 Stessl 520 Bluewater.

With a striking teal and black wrap and sharp, aggressive lines all over, this particular Bluewater was one of the best-looking rigs I’d ever seen. Developed using Stessl’s exclusive Platerix Series heavy-duty plate alloy construction, this is one solid boat designed to withstand the rigours of serious offshore fishing.

Utilising sturdy 4mm plate bottom and side sheets, the 520 Bluewater adds offshore pedigree in the form of fully welded gunwales and side decks, an enclosed transom with twin hatches and acres of fishing room. Ubiquitous underfloor flotation is standard, as is a massive 150-litre fuel tank tucked under the floor, providing a serious cruising range of 350km when teamed with Yamaha’s superb 115hp four-stroke.

That impressive range would increase even further with the recommended 90hp on the back, instead of the maximum 115hp. I wouldn’t have it any other way however, as the test rig powered by the Yamaha F115 four-stroke proved to be an absolute gem. The F115 was almost unbelievably quiet at all speeds, barely whispering whether idling or punching through chop and swell in the Tweed Bar.

In fact, another boat on the test day was powered by a 90hp Yamaha four-stroke, and despite the two engines being largely similar with the same 1.8-litre engine block and identical bore and stroke, I found the F115 to be a good few decibels quieter than the F90LB. Possibly the F115’s double overhead cam head design had something to do with it (compared to the F90’s single-cammer), but whatever the reason, the F115 was the notably quieter engine and raised voices were not needed to converse at the helm when under way.

I felt the test rig was perfectly powered, jumping on the plane with no fuss whatsoever, and in the Tweed Bar showing the sort of instant, mid-range grunt necessary to safely navigate most coastal bars. And this wasn’t just thanks to the motor, as I could really feel the Platerix hull working underneath us to slice through the substantial waves and push spray well clear thanks to effective reverse chines.

We decided these ugly conditions would also present the perfect opportunity to test the boat’s stability, and with three ‘full-size’ adults sitting on the gunwale in over a metre of fast-moving swell, the 520 Bluewater wasn’t fazed, which is great news for those keen on offshore fishing. Heading back to calmer waters further up the Tweed River meant punching through some of the shortest and sharpest chop I had ever encountered. With 20 knots of wind blowing into our faces against who knows how many knots of tide, these were brutal little waves, but sitting happily at 4000rpm and 40km/h, the Stessl 520 Bluewater just ate it up, skipping athletically over the worst of the chop to provide a mostly cosseting ride.

And this is despite the driving position being almost on the bow of the boat. In the pursuit of maximum fishing room, Stessl has pushed the seating position as far forward as sensibly possibly, and amazingly (unlike some other brands that follow this design ethos), the ride didn’t unduly suffer as a result.

Internally, the Stessl 520 Bluewater has a raised foredeck constructed from fibreglass, which makes for a tidier finish and nicer touch points than regular aluminium. The seats both fore and aft are excellent and overall layout is perfect. A ‘luggage rail’ runs around the floor following the dash, which is great for tucking tackle bags and other items out of the way and for resting feet on while under way, and a sports spoke steering wheel added a classy touch.

The centre portion of the curved three-piece windscreen opens out and works with a recess in the fibreglass dash to allow easy access to the anchor well that is ‘sunk’ into the fibreglass foredeck. The carpeted floor throughout features storage hatches underneath and the test boat had a sizeable kill tank tucked under there too.

An enclosed rear transom with two twist-lock hatches keeps the stern neat and tidy and the tuck-away rear lounge with padded backrest is a great place to sit while on the move. A swing-opening rear door leads out to a dual-step, non-slip boarding platform and grab rail with a heavy-duty folding dive ladder. The test boat was kitted out with an optional bait board with live bait tank, which was an excellent setup, as well as a rocket launcher on the bimini, two options I can definitely recommend for anyone keen on doing some serious fishing in their 520 Bluewater.

On that note, anyone in the market for a moderately sized, well laid-out fishing rig that is as happy in the estuaries as on the offshore reefs would do well to take a very close look at this boat. And don’t forget, with that teal and black wrap it looks damn sexy to boot. Packaged on a quality Dunbier trailer, drive-away prices for the Stessl 520 Bluewater from Marine Tune on the Gold Coast start from just $42,490 when paired with a 90hp four-stroke.

As tested, our boat ran to $48,990 thanks to the bigger motor, Raymarine Axiom sounder/GPS and other options mentioned earlier.

For more information on the great-value Stessl 520 Bluewater, head to stessl.com.au and to learn more about the exceptional range of Yamaha outboards, visit yamaha-motor.com.au

Daniel is BNB's subeditor and occasional fish-wrangler. If you've got a great story or at least an idea for one, flick Dan an email at editorial@bnbfishing.com.au
Previous Family entertainment and great prizes at Moreton Bay Expo
Next Anglers head offshore in good Bundaberg weather 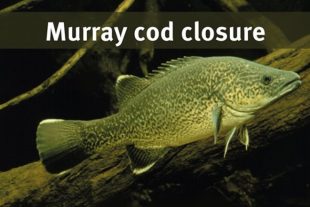 As more people hit the road to experience the great outdoors via boat, Move Boat …