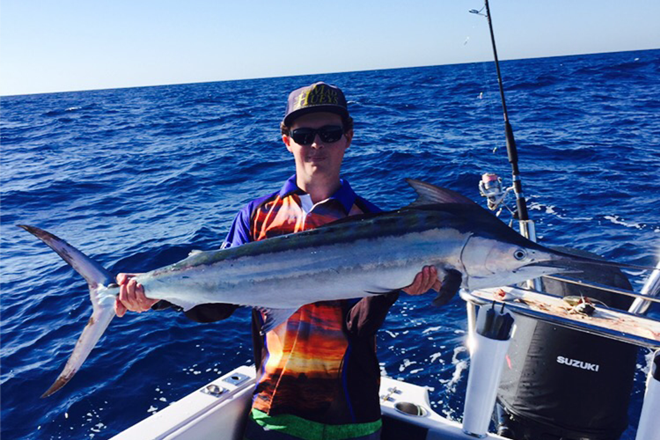 Mitch Beyer with the marlin he caught off Bundaberg last weekend.

Anglers make the most of brilliant Bundaberg weather

Well, now we are into the eight month of 2017, and the days are warming up so it won’t be long until species like mangrove jack and barramundi start becoming more active in the Bundaberg area. Once again, the weather last weekend was brilliant in this part of the world and it was fantastic to see so many boats out and about making the most of it.

Some really nice snapper and grunter were caught around the shallow inshore reefs off Bundaberg last weekend.  Good sized school mackerel have also been in good numbers in the same areas, with pilchards rigged on gang hooks and set under a float or balloon working really well. The boats that did head out a little wider all managed to land a good feed of sweetlip, coral trout, hussar, parrot and the odd nice red emperor was also caught. The reef fishermen also reported seeing quite a few small black marlin and sailfish.  Let’s hope this continues and the game fishing out from Bundy only gets better.  Just keep in mind that there are big numbers of whales off the coast at the moment, so play it safe on the water.

Back to the local rivers and creeks, the winter whiting have been patchy around the mouths, but the anglers who are putting in the effort are being well rewarded. Some nice bream have continued to be caught along the North Wall on both soft plastics and peeled prawns. A few prawns have showed up around the Port and Strathdees with the low tide being the best time. Some nice flathead have been caught around the sandbars up towards Splitters Creek with the 100mm and 120mm Squidgie Wrigglers both working well.

On the freshwater scene, the water levels are extremely low at Lake Gregory, so it’s best suited to kayaks over the next few weeks or so until Sunwater releases some water and fills this magic little impoundment back to normal levels. Lake Monduran is still producing a few barra.  It seems that the water temperature is already starting to rise to around 22-23 degrees, with anglers reporting better sessions in the afternoons.

Hope to see you out on the water this weekend.