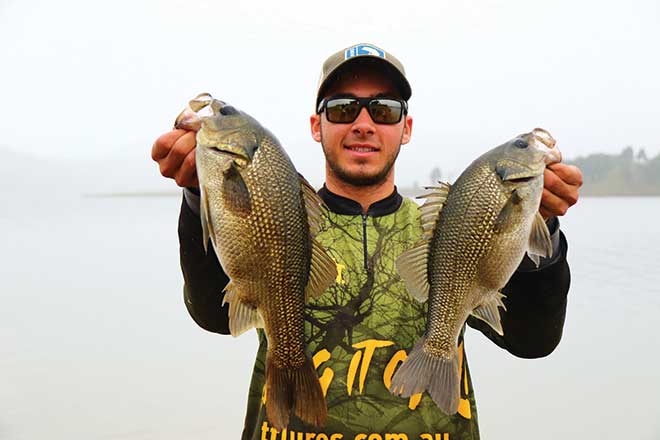 Dane Radosevic picked up his first title in the Pro division.

FISHING was hot at the JML Anglers Alliance St Clair Classic and a young man from Hervey Bay claimed his first title.

Dane Radosevic had already achieved one of the most prestigious trophies in Australian fishing circles by claiming the Samurai Rods Angler of the Year title in 2015, beating some of the greats in the process, but until this tournament he hadn’t secured a win in the class. After a very confident pre-fish, Dane went out and smashed the field by a comfortable 740g using his go-to Z-Man Slim SwimZ 2.5” rigged on a Tackle Tactics DemonZ 1/6oz jig head with a super-sharp 1/0 hook.

Dane fished this presentation to the edges through the entire tournament. Using a shake and retrieve technique, Dane has perfected this type of angling and relies on some critical gear to make the lure move the way he wants it to.  Dane matched a Shimano Stradic Ci4+ 1000 spooled with Shimano Mission Complete 12lb braid to a Shimano Zodias JDM 270UL and his leader of choice was Shimano Ocea Fluorocarbon in 6lb, which allowed him enough strength to pull the bass away from the weed while not standing out in the crystal-clear water of St Clair.

Instantly qualifying for the Atomic Championship scheduled to be held on Lake Boondooma in August, Dane is now mentally capable of going all the way and pushing hard for the title that is so sought after by so many anglers. In second place was a new angler to the Pro ranks. Jye Clayden from Cessnock, NSW did an amazing job and was in contention to take out a win in his first outing. Jye also chose the Z-Man Slim SwimZ and used his Bloodworm-coloured plastic over the weekend, fishing the backs of bays with heavily weeded banks.

He used a Shimano Stradic on a Millerods Control Freak and rigged the plastic on a Berkley 1/6oz Dam Deep jig head. Rounding out the top three was Dean Silvester who claimed another cheque and also the Samurai Angler of the Year title, making this his third in four years. The question now remains, is Dean the best angler Australia has ever seen? And who is going to step up and challenge the dominance from the hardest-working angler in the country?

Dean used a combination of techniques including Keitech Easy Shiners fished in combination with Berkley Dam Deep jig heads over patches of weeds near or on the shoreline. His go-to setup for plastics involved an N.S Black Hole 702L matched with a Quantum Smoke PTiA 25 spooled with Sunline PE-Egi 0.6PE and topped off with 5lb Sunline FC Sniper Fluorocarbon.

In the Co-Angler division of the JML Anglers Alliance St Clair Classic, Robert Tilley claimed his first title, with Daniel McCoy in second place and Colin Linton rounding out the top three. Robert used a mixture of jerkbaits to catch his limits including the Rapala X-Rap and Daiwa Double Clutch presented near or on top of the weed beds around St Clair’s beautiful shorelines.