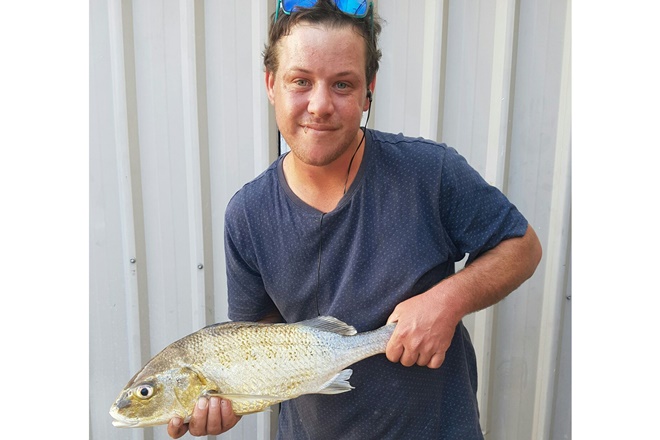 Last weekend quite a few anglers took advantage of the good conditions and by all reports the boats that headed out wide were very well rewarded.  Big coral trout, red emperor, sweetlip and cod were common catches.  Other catches included dolphin fish, spanish mackerel and black king (cobia) taken by floating either live or dead baits out behind the boat.

The inshore grounds are starting to produce some nice snapper with most of the snapper hanging mid-water cruising the reef ledges. Using lightly weighted baits and drifting them back behind the boat has been producing the goods.  Also, a 4 to 7 inch soft plastic rigged on a ½ ounce jig head fished closer to the bottom has been working a treat.

Not much has changed in the Burnett River this past week.  The winter whiting have been a little patchy just out the front but still definitely worth a look.  Good numbers of bream up to 1kg are along the rock walls, some big grunter up to 60cm have been keeping anglers entertained as well as plenty of sand whiting and flathead on the sand bars up towards Splitters Creek.  The blue salmon are still in good numbers in the town reach with bait fishermen hooking some crackers this past week.

Both of these systems are fishing and crabbing well with plenty of flathead, grunter, bream and whiting being caught up the creeks.  With the cooler weather more and more tailor are starting to show up towards the mouths and along the beach.  As I mentioned earlier, a few nice muddies also fired up with the bigger tides last week.

Winter is prime time to fish both of these impoundments as the Australian Bass tend to school up in big numbers and usually are willing to bite many different types of lures from blades, tail spinners, soft plastics and spinnerbaits.  I’ve seen bass up to 50cm caught in both locations this past week which is fantastic fun on light gear.

Finally, don’t forget the annual Volunteer Marine Rescue (VMR) Fishing Competition being held next weekend on Friday 29th  June, Saturday 30th June and Sunday 1st July near the VMR Base at Burnett Heads.  This is Bundy’s biggest fishing competition and with over $70,000 in prizes and lucky draws, it’s sure worth putting this one on your calendar!

Let’s hope the weather is fantastic and we’ll see you down there next weekend.