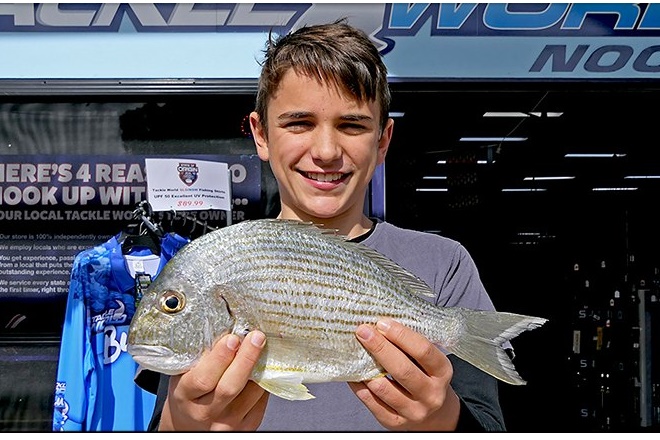 Lachy Beadle from Tewantin (below) fished the rocks at the northern end of Sunshine Beach with his dad on Sunday morning and picked up this stonker 36cm tarwhine around mid tide. Photo: www.fishingnoosa.com.au

The Noosa River has again seen anglers spoilt with great catches of trevally and tailor. The predatory fish have been very active around the river mouth, Woods Bays, Munna Point and up on the first ski run chasing bait brought in on the tide. Casting slugs, soft plastics and surface lures like the Strada Tournament 80mm poppers and 95mm Bassday Sugapens at dawn and dusk is a good way to tangle with a solid trevally or tailor. Whiting and bream have been common catches of late right throughout the system with the dog beach and Gympie Terrace both producing some good fish. Mangrove jack are still active even though the waters have cooled.  These ambush predators have surprised a few anglers with their ‘smash and run’ feeding technique. Jacks are often out in the open at night as they hunt for a feed. Live baits and soft vibes like the Berkley Shimma shad and Samaki 70mm Thumper Tail on 20lb YGK fluorocarbon leader has been the way to go. Flathead are in good numbers with some monster females feeding on small baitfish and prawns predominantly on the run out tide. Fishing the drop off has been the most productive. Jew number are also improving with the Ski Runs the most popular place to target them, fishing live prawns or small baitfish will see you hook up.

On the offshore seen; Sunshine Reef is really firing with some quality grassy sweetlip snapper and trout over the last week. The pelagic season is starting to slow now as the waters cool, there are still  a few spotted mackerel and school mackerel as well a couple of really good spanish mackerel on the close reefs. Slow trolled deep diving baits on skirted hooks has been a popular way to target them. Tuna are also on the chew with some schools chopping up bait in Laguna Bay. Both North Reef and Chardons Reef have been fishing very well with good sized snapper, tusk fish, pearl perch and sweetlip. For the bigger boats, the Barwon Banks, the hards and the reefs off Double Island have produced some outstanding fish, snapper, pearlies, moses perch, cobia, tusk fish, red emperor and jew were all taken over the weekend. The key to getting onto some good reef fish is to get that burley going, cut up pilchard pieces dropped into the water at a slow rate will help to bring those great tasting reef fish around, don’t overdo it as you will attract those pesky sharks.

On the beaches the tailor are starting to make their way north to spawn on the Fraser Coast, good quality fish continue to be taken along the Noosa North Shore beaches with the high tide in the very early morning  the most productive. Fresh Mullet, bonito and pilchard baits have nailed most of the fish. We are seeing some larger greenbacks with the most successful anglers using the slide bait method. Dart are in good numbers with most fish in close, prawns and small fish baits have claimed plenty. We are also seeing some good quality whiting coming from the breakers, live worms and pippies have been the go to bait. Off the Rocks at Noosa National Park plenty of quality bream have been taken along with some squire and sweetlip.

In the Fresh water; the bass are still about around the edges so casting surface lures morning and afternoon has been successful, frog and cicada profiles have been popular with the new Chasebaits Bobbin frog claiming some nice fish. Larger schools are starting to form in the deeper parts of the dam as the fish look for those warmer thermoclines, fishing Micro Jigs and Diving hardbodies has seen some good results.