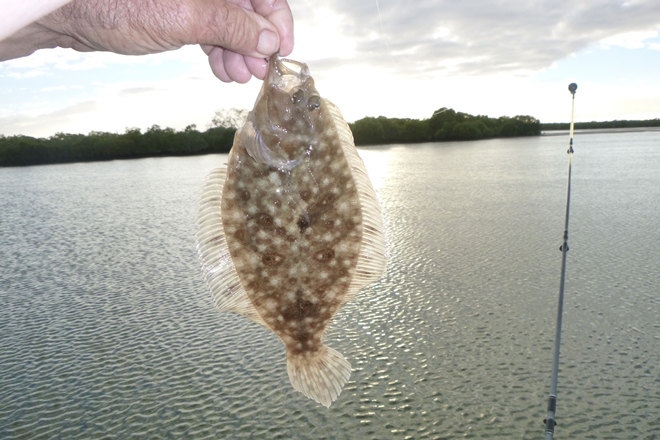 One Houseboat customer sent us this photo of his recent catch a small leopard flounder.

Anything could turn up around Coomera

We have just had a couple of the most perfect Autumn days around Coomera, with lots of sunshine and very low winds but it looks like that is all about to change. The forecast for the Gold Coast has us expecting quite a bit of rain over this coming week end. The winds are going to stay east to south-easterly and then changing to north-easterly and decreasing Saturday afternoon.
For those of you who have been asking about the King of the Pin fishing competition that runs over the last week end in May, sadly it will not be run this year. Due to a number of reason the Sundowners Fishing Club that has run the comp for over 40 years have sadly advised that it will not be running the competition in 2017, they will review their membership numbers and sponsor support for 2018 and advise as soon as possible. Let’s hope it is back up and running in 2018.
A mixed batch of Snapper, Moses Perch, Samson Fish, Hussar, Spangled Emperor, Tusk Fish and a few small Pearl Perch on the 18 and 24 fathom reef east of the Seaway have been reported this week. As the water starts to cool we will start to see some whales moving north on their migration, so if you are lucky enough to be off shore, keep a look out for our first whales of the season.

The Coomera River has been busy this week with a few good sized snapper turning up and also some nice Flathead. Try the Aldershots, Brown Island, Tipplers Passage, Coomera River, Tiger Mullet Channel, Jacobs Well and the Logan River. Whilst targeting the weed beds keep an eye out for squid, plenty have been caught. Try Plastics and hard body lures.
Jumpinpin Bar entrance has been producing some nice Jew Fish, Tailor and Trevally this week, plenty of bait in the area has attached the hungry predators. Live baits and lures will work, best to fish the last 2 hrs of the run in and the first hour of the run out tide.
Customers have reported some nice Bream around Short Island, Tiger Mullet Channel, Logan River, Jacobs Well, Coomera River, Paradise Point and the Gold Coast Seaway. Mullet Fillet, Mullet Gut, Prawns and Yabbies are great bait. You never know what you might catch in our Broadwater.