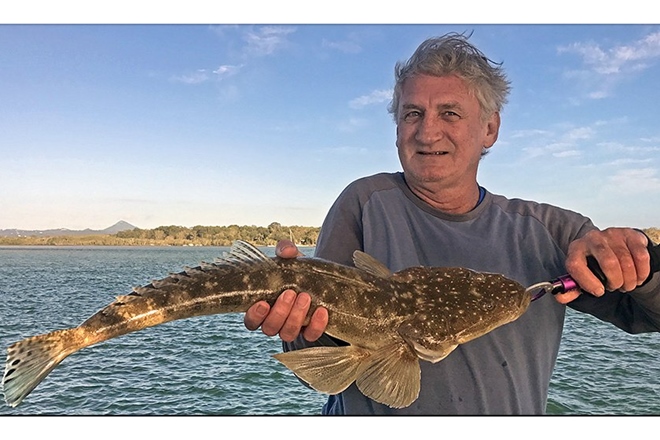 In the Noosa River, the season for flathead just keeps rolling on. Again we have seen some really big fish this week, with a couple over the 90cm mark. Live baits are still the go to method with herring being the most popular bait. Dead baits are also working well, the standout is still whitebait fished on gang hooks. A lot of anglers are employing a scented dye to change the colour of their baits. This is an added visual attractant as well as giving the bait an added scent layer.

Soft plastics have also been claiming their fair share of flatties, Z-Man MinnowZ in 3″, Chase Baits in 2.5″ and 3″ and Gladiator Prawns have all recorded good catches. Don’t forget the scent when casting plastics to improve your chances. Last week saw some good whiting landed on poppers up in Weyba Creek. With the windy conditions try and get the wind at your back this way you can cast lighter lures and cover more ground. This is a very exciting way to fish as you see the follow and the strike all in about half a meter of water.

Fishing small poppers and surface walkers is the go with the incoming tide always the best for this technique. For the bait anglers, live yabbies and live worms have seen some good catches recorded. Some excellent catches of Bream were reported this week with night time run out tides being the pick for the bream anglers. Bream can be a bit fussy and enjoy the quiet of the night to do their foraging. For those that braved the early hours, fish were responding to fresh mullet strips, mullet gut and frogmouth pillies. Trevally numbers and sizes are on the increase with golden and giant trevally accounted for most of the captures this week.

A few hard fighting Queenfish were also taken down around the river mouth and on the current lines. The new Nomad Mad Scad’s in the 95mm and the Riptide Fatso in the 115mm size were both standouts. These lures are awesome to fish with, a steady retrieve sees them skate through the top of the water with a dynamite action. Some massive Tailor have been taken at night on livies and surface lures. Reports of fish over the 90cm mark have been pretty constant this week. A high tide at night is seeing these fish move into the river to feed on the plethora of bait that is present in the river at the moment. Fast moving soft plastics, surface walkers and slugs have all claimed these hard fighting tailor.

The Offshore seen was pretty well shut down last week with strong winds and sloppy conditions. For those that braved the conditions a few Longtail tuna were landed on stick baits. Fished fast these lures have been the major contributor to good catches. The fish Inc. Flanker 115mm in 28g and the Jackson Kaiken 110mm in 33g have been the first out of the tackle box.
The beaches have been a bit tough to fish with the South easterly winds last lashing the coast last week. The north facing beaches have been popular with anglers this week. Noosa main beach and the groin have fished well for bream, whiting and flathead.

Some really nice Tailor were caught off the rocks at the Fairy pools on floating pilchards. Some good whiting were taken at First point and Tea Tree Bay on the top of the tide. Live worms have been the standout bait with squid heads also working really well. The rocky points around the National park are holding some big Bream and squire, fishing a lightly weighted bait in the wash has seen some nice fish landed.

In the fresh water; Borumba Dam has been fishing well with the timber at the junction of the Yabba and Kingham arms fishing well. The fish were holding deep and soft plastics fished over the top of the schools worked well. Zman watermelon red grubz in 2.5in was the most popular colour. Saratoga have been caught up in the upper reaches of each arm with surface lures in the early morning and late afternoon. Lake Macdonald has fished well this week a few nice Bass have been taken along the bubble line and up around the botanic gardens. In the upper reaches some really big bass and a few Saratoga have been claimed with surface walkers doing the damage.