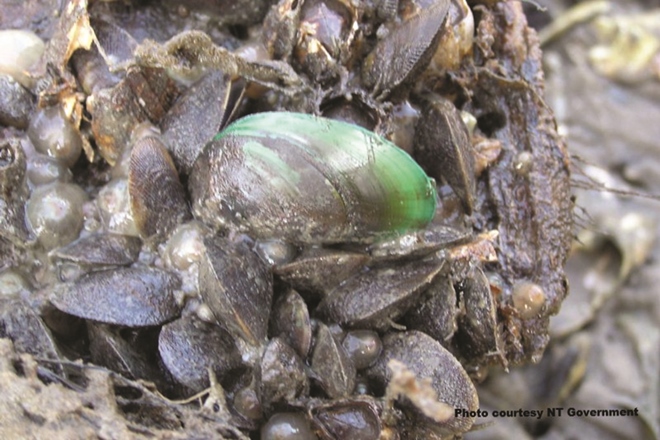 AVOIDING crocodiles and hunting mussel DNA are two priorities as the surveillance effort continues in the hunt for Asian green mussels around Weipa, following the discovery of a single mussel south of the town in May 2017.

Biosecurity Queensland officers have spent time working with local businesses and the community to check areas where the mussels may take up residence, including wharves, moorings and old pieces of nets and ropes. “We have received great support from the local community, and our officers have been working with North Queensland Bulk Ports, Queensland Boating and Fisheries Patrol, Maritime Safety Queensland, the federal Department of Agriculture and Water Resources and Rio Tinto to look for signs of the marine pest,” Biosecurity Queensland Invasive Plants and Animals general manager Dr John Robertson said.

“Biosecurity Queensland officers met with local stakeholders last week to discuss the investigation and establish an Industry Reference Group to keep partners up-to-date with activities,” he said. “We are implementing a range of surveillance techniques, including partnering with CSIRO to use a Remotely Operated Vehicle funded by the federal government, to investigate underwater infrastructure. We’re now reviewing the footage taken from a range of sites, including Evans Landing, Hey Point, Hey River, Boyd Bay, Humbug, Hey River Terminal, Weipa Harbour, and Cora Bank.”

“The plankton tows target the traces of the mussel like eggs and larvae in the water, which float around and disperse after spawning,” JCU principal research scientist Dr Rob Coles said. “In other Asian green mussel surveys we have also used divers to survey the bottom of moored vessels – but that is not practical in Weipa due to the presence of crocodiles.”

To report marine pests or for more information, contact Biosecurity Queensland on 13 25 23 or visit www.daf.qld.gov.au

Information about Asian green mussel and photos that will help you identify them are available at www.daf.qld.gov.au

@@BNBFishingMag
Previous Quintrex Freestyler for the whole family
Next Anglers warned: using pest fish as bait is out of line