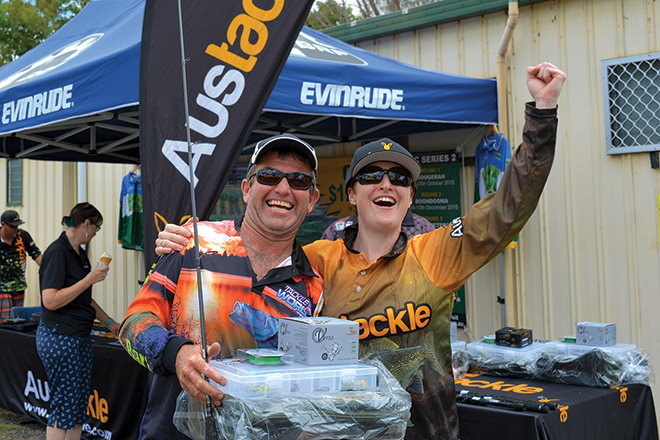 A couple of happy anglers.

YALLAKOOL Caravan Park on Bjelke-Petersen Dam welcomed 145 competitors (including 44 juniors) to its picturesque grounds for round three of the Austackle-Bluefin Country Fishing Classics.

The dam had been fishing superbly leading up to the event and it held form for the duration of the competition, with plenty of fish recorded. Fingerlings added to the dam by the local fish stocking association are clearly growing well because the sizes of fish recorded are increasing with each event. Lures that worked well were paddle-tailed soft plastics, ice jigs and blade lures such as the Austackle Gizmo Crustacean.

Austackle donated four fishing rods and a Camp Lake Fire voucher to be drawn in a raffle for the BP Dam fish stocking association, which raised $825.  Twelve lucky entrants went into the random draw and walked away with over $7800 in prizes thanks to generous sponsors. Prizes included a Lowrance Elite-7 CHIRP unit plus maps, two pairs of Tonic Eyewear sunglasses  and plenty of Austackle fishing gear.

The random prize draw and lucky dips had a combined value of over $14,000 – well worth the entry fee! Camp Lake Fire on Maroon Dam hosted round four from February 20-21, while round five will be held on Lake Coolmunda from March 2-20. You only have to compete in one round to gain entry to the grand final in May, where a Bluefin and Evinrude boat package will be given away along with heaps of other prizes – all by random draw.

All ages are welcome and every child receives a prize.