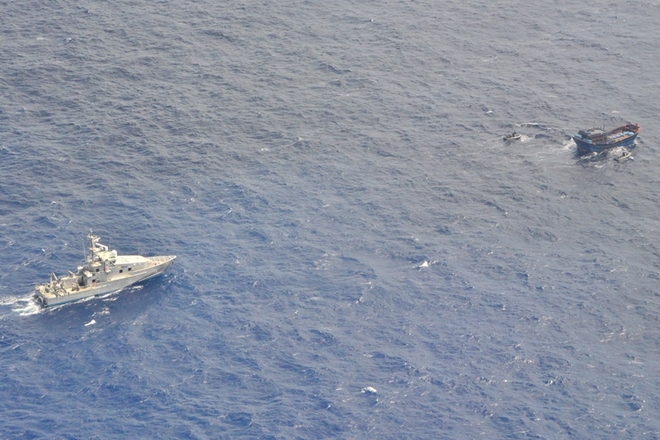 A Vietnamese fishing vessel suspected of illegally fishing in Australian waters was apprehended off the coast of Cairns.

THE Australian Fisheries Management Authority has completed a joint public information campaign with the Vietnamese Ministry for Agriculture and Rural Development and the Vietnamese Directorate of Fisheries in Vietnam, as part of efforts to combat illegal foreign fishing in our oceans.

Assistant Minister for Agriculture and Water Resources Anne Ruston said over 200 Vietnamese fishers and government officials attended the workshops regarding international maritime boundaries, and the consequences of illegal fishing in Australian waters and the Pacific. “The joint approach from Australia and Vietnam demonstrated a united front to deliver the message that those who do the wrong thing face financial penalties, potential jail time and the destruction of their fishing boats,” Minister Ruston said.

“The information campaign honoured a commitment under the Australia and Vietnam Memorandum of Understanding to educate Vietnamese fishing communities about the risks and consequences of illegal fishing. In the past two years there have only been 14 Vietnamese fishing vessels apprehended in the Australian Fishing Zone, with a total of 180 fishers convicted.”

The campaign was delivered in the Quảng Ngãi Province, the source of many fishing vessels apprehended in Australian and Pacific waters in recent years. Vietnamese vessels travel long distances to fish illegally in Australian waters to target lucrative species such as sea cucumbers and giant clams. Illegal, unreported and unregulated catch can devastate localised populations of marine species and result in damage to environmentally sensitive ecosystems.

Australia continues to work with Vietnam, Palau, the Federated States of Micronesia, Papua New Guinea, Indonesia, New Caledonia and the Solomon Islands to combat IUU fishing in Australian waters and the wider Pacific region. IUU is a significant global problem, estimated to cost up to $23 billion annually and representing 11 to 26 million tonnes of catch.