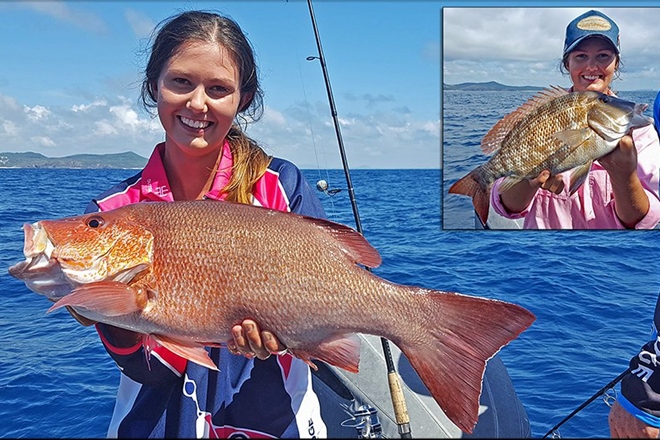 Ashley Taylor from Toowoomba with a quality darktail sea perch and a grass sweetlip. Photo: fishingnoosa.com.au

On the Noosa River, the bread and butter species have been keeping anglers busy, good numbers of bream, whiting and flathead have been on the bite around the river mouth and frying pan area. Using live worms and yabbies have been getting some good results, if you haven’t got a yabby pump give peeled prawns a go. The flatties have been loving the soft plastics, the curly tail soft plastics from both River2Sea and Z-Man have been dynamite. Rigged on a 1/4 Oz jig head so you keep close or on the bottom will put you in touch with the fish, don’t forget to scent your plastics with either S factor or Pro Cure to give you that added advantage. Woods Bays have been producing quality tailor, and trevally during low light periods, poppers and surface walkers have been getting the job done. For the anglers that love their bait, fresh mullet, bonito strips and whitebait have been prime baits. Mangrove jack have been on the prowl in the upper reaches of the river and responding well to live and fresh flesh bait. The Samaki Thumper tails and Live Target Swim Baits have been great on the red devils, with the vibration from their tails really firing them up. Crabs are still on the move with some good sized bucks getting taken around Lake Doonela and the Tewantin Ski Run. The crabs have been nice and full and very sweet. Make sure you mark your pots and meet all the regulations in regard to size and bag limits. There is some hefty fine for those found to be doing the wrong thing.

On the offshore front; things have been a little tough for anglers in small boats as the swell started to rise and the wind speeds picked up in the earlier than expected, angler with larger boat heading straight to Sunshine Reef while others did the run up to too North Reef.  For those that fished North, cobia, pearl perch, parrot, mori cod, and sweetlip were all boated, pelagic’s were also on the cards with some nice spotted and spanish mackerel landed. In a little closer the northern end of Sunshine Reef has been produced good numbers of squire, sweetlip and the odd big coral trout. If you have a smaller craft or just aren’t willing head out to far, then Halls Reef and jew Sholes are perfect with plenty of spotted and spanish mackerel and the odd tuna, from the bottom grassy sweetlip, cod and squire have been taken. Floating pilchard baits or live baits through a well maintained burley trail is a sure fire way to get them to chew.

On the beach; the Noosa’s Northshore has been fishing well with plenty of bream and whiting inhabiting the gutters and holes, there have also been a few quality tailor moving through the gutters and smashing the smaller baitfish. Fishing the high tide may also see you come into contact with a nice jew. There are plenty of gutter on the way up the beach so make sure you pull up and give them a go. The southern beaches around Sunrise and Marcus beaches have been really firing for quality whiting, the Instinct Whiting Prowler rigs presented with small baits including live worms, prawns and yabbies has been the perfect way to tangle with some good elbow slappers. On the rocks casting slugs like the Arma Metalik and the River2sea Sea Rocks has produced some quality trevally, Dart and even small Mack tuna.

In the fresh; Lake Macdonald bass, have been taken by anglers around the bubble trail and fishing the deeper holes with spinner baits and vibes, smaller plastics on 1/6 Oz jig heads has also seen plenty of success. For those out early the surface bite around the edges has been exciting fishing, Cultiva ZipnZiggy, Strada Zedia walkers and Jackson Risk baits have been the go too lures. In Borumba the bass and saratoga are really on the chew with plenty of fish taken early in the day, best results have come from the Kingam and Yabba arms, again vibes and spinner baits have been outstanding on the bass while the OSP Dunk and Daiwa Silver wolf hard bodies have been working very well.