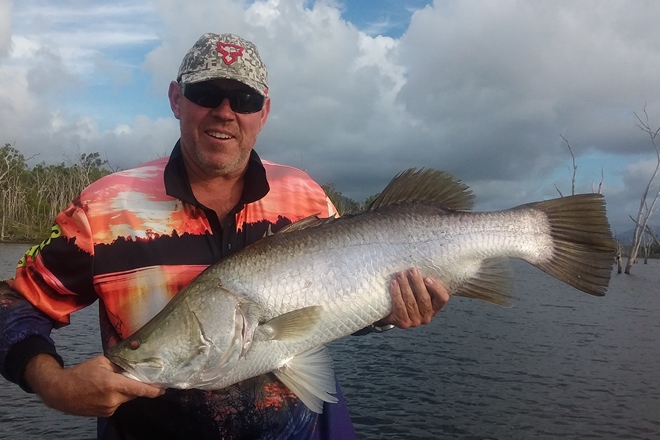 By now, everyone should have recovered from the Australia Day celebrations and are either back at school or work for another big year.

The good news for all the barra fishers is the barra season opened up again at midday on the 1st of February for all of the rivers around the Bundaberg area.

With the full moon on Wednesday night, barra fishers should enjoy good success and mangrove jack will be a good option too this weekend, as the southeasterly winds that are forecast will make fishing offshore too uncomfortable.

The Burnett River has had good numbers of queenfish, school mackerel, tuna and trevally which have been active around Burnett Heads.

Further upstream around the sand flats at Strathdees, some nice big summer whiting have fired up this past week.  There are still plenty of big bream and grunter along the rock walls and gravel patches between Strathdees and the Town Reach.

There’s a bit of a mixed bag up to the top of the river around Splitters Creek with some nice whiting, flathead and mangrove jack biting well on both soft plastics, fresh yabbies and beach worms.

Good numbers of mangrove jack are still being caught in the Elliott River.  This little river has cleaned up nicely and has provided anglers with some red hot sessions on these awesome sports fish.

Most of the local rivers have had a good run of mud crabs and prawns, so it’s definitely worth putting in a few pots and taking a cast net to try to catch a delicious feed this weekend.

On the fresh water scene, the annual Boondooma Dam Family Yellowbelly Fishing Competition will be held on the 10th and 11th of February at the dam near Proston.  There will be $40,000 worth of cash and prizes to be given away all weekend, and this is always a really well-run comp.

Back closer to home, Lake Monduran’s barra have been active and with the constant wind in the same direction the barra have been easier to locate.  Hot lures this week have been the Rapala Shadow Raps and Jackall Squirrels.

Just finally, the latest Bass Nation Barra Round was held at Lake Proserpine (Peter Faust Dam) last weekend.  Big congratulations to Dustin Sippel and Rick Napier – Team Triton and Edge Rods – two local Bundy boys who won the round, fishing against some of the best barra fishers in Australia.