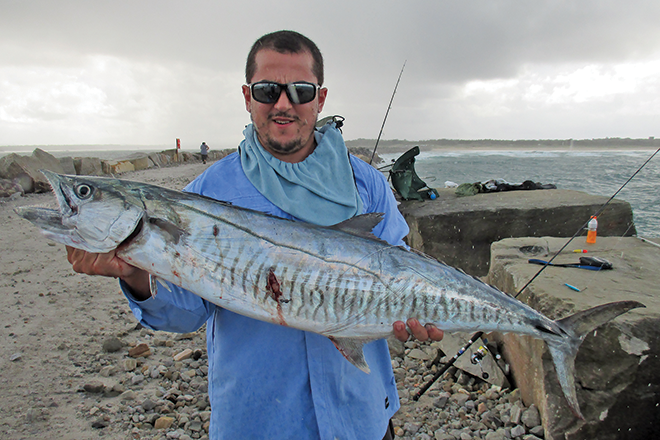 The spaniards were so thick in early March that even Canterbury-Bankstown supporters like Milly Merhi got amongst the fish. This was one of several spaniards Milly landed on both lures and live bait.

AS we all know, the month of March begins with the letter ‘m’, however so does the word mackerel, and here at Iluka March provided the best land-based mackerel fishing I have seen in nearly 40 years of chasing pelagics off the rocks on the NSW Far North Coast.

The Iluka breakwall saw the best of the action, with up to a dozen hook-ups and a dozen strikes without hook-up occurring on the best days, however even on the bad days one to two fish were landed. The vast majority of fish were of the spanish variety ranging between nine and 25kg, with the odd stray spotted mackerel around the 5kg mark also hooked.

While live baits such as gar, slimy mackerel and legal size tailor accounted for quality fish, so did lures such as the Rapala X-Rap, Storm So-Run 110 and Halco Max in White Redhead and Yellowfin. Yamba angler Damian Cliffe, who is more renowned for his jew fishing exploits, chose to have a few casts from the point of the wall with an Elton John-coloured deep-diving Frenzy lure and hooked a brute of a spaniard that was eventually eaten by a rather large shark.

My son Mischa and fishing author Andrew Mayo both got blown away by spaniards at the southern end of the Iluka Bluff when casting 60g metal slugs during a tailor spinning session.


At the time of writing only a couple of longtail tuna have been hooked and every fish to date has been taken by bloody big sharks. Ashby angler Ted McLean hooked a big longtail well over 20kg on a live gar only to be left with the head after just one bite. Naturally, with the number of big pelagics patrolling the wall, live bait can be hard to find at times, so Mischa and I often catch gar in the Clarence River and carry them out to the wall just in case.

It may sound like too much effort for some but I can assure you that having a bait out in pelagic-infested waters while your opposition is battling to catch one is a good feeling. Hopefully April will be just as productive but I have a feeling that a flood of some sort will eventuate and cut this year’s season short. I hope I am wrong.

The big negative with the land-based season is the amount of rubbish left on the wall by pigs disguised as fishermen. I really would love to know where some of these losers live so I could arrange for the local garbage truck to dump a load on their front lawn.

Thankfully it is only a small minority who litter, however even one person is still one too many.
Most boats putting to sea are also concentrating their efforts on chasing both spotted and spanish mackerel, with good catches being reported daily from right along the coast.

The close-in grounds near Jackys Bommie at Woody Head have produced quite a few big cobia along with the odd small snapper and school shark. A bit further north at Black Rocks, boats are returning with mixed bags of trag, snapper, mackerel and small cobia around the 12kg mark.

Inside the Clarence River, March saw flathead dominate catches, with plenty of large fish to nearly 7kg being weighed in each week. The Middle Wall has been the pick of the spots in recent weeks, with the best fishing occurring at the bottom of the tide using live herring or lures.

Elsewhere, plenty of smaller pan-sized fish are being boated by drifting over the sand flats with white pilchards or casting soft plastic lures. Solid whiting can still be found along the deeper water on the southern bank of Goodwood Island, around Sleeper Point and either side of Oyster Channel Bridge.

April marks the start of the yearly jew run in the Clarence River and all efforts will be concentrated on the proven locations including the southern end of the Collis Wall, Pinch Gut, Sleeper Point, the Skids on the bottom end of Freeburn Island near the shark buoy and the bottom end of Middle Wall.

Using unweighted live mullet on the slack high water just after dark is the key to success as the jew move in each year to gorge on the vast schools of flat-tailed mullet that travel downstream to spawn.
These spots will continue to produce fish right through to early August when the mullet return upstream for the summer.

Solid school jew of eight to 10kg continue to be taken from the Iluka and Yamba breakwalls at night, with squid the preferred bait. Similar-sized fish are also falling to hard-bodied minnows around the headlands.

The Iluka Bluff and Lovers Point over at Yamba are two of the more productive locations.
Tailor are a dime a dozen if you are prepared to cast metal slugs around the headlands, with fish ranging in size from barely legal to over 3kg, however for some mysterious reason very few fish are being taken from the beaches on bait.

So, April will see mackerel and longtail tuna targeted by both the land-based and offshore brigades and in the jewfish stakes all eyes will become focused on the lower reaches of both the Clarence and Richmond rivers. As the month draws on and the weather begins to cool, whiting numbers will start to decline as they make way for the traditional winter species such as bream and luderick.

As for Mischa and I, well we will be stalking the bottom end of the Clarence on the hunt for a jew or two at night and fishing for mackerel and tuna from the walls and headlands by day. April is set to be a cracking month, with the only possible upset coming from heavy rain caused by an east coast low.
Until next month, safe fishin’.