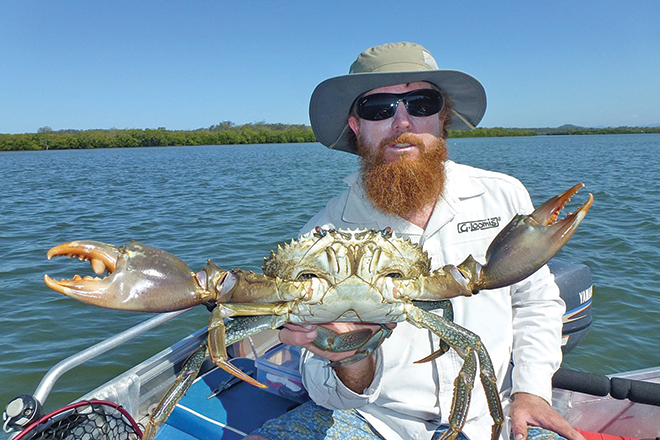 Brett and one of many good muddies caught this season. This month will also see quality muddies captured.

Good Fishing on the Gold Coast

HI everyone; April is a changeover month for a lot of species people love to target while fishing on the Gold Coast, meaning it’s a great time to get on the water.

Although our winter species start turning up, we still have all the summer species to chase as well. And as the weather and water temperature begin to cool the fishing becomes much more enjoyable.

Our dry, windy and hot start to the year hasn’t helped things but the fishing has been reasonably good during the small windows of decent weather. This month normally sees the weather settling and making fishing easier.

Schools of herring and white pillies will move into the Broadwater during April and jewfish, tailor, queenfish and trevally will follow these schools from the Seaway and through the Broadwater to the deep hole at Couran Cove in the north and Sundale Bridge in the south.

Jewfish and trevally will stick to the deeper holes and channels, so trolling 10cm-long deep-diving hard-bodied lures works well to catch these fish. Once a school is found, small soft plastics and blades are good options.

It is amazing just how big a jewfish will take a small 1/2oz blade. Tailor will also be caught this way but these fish will get up in the shallows on top of the weed and sandbanks north of Crab Island. Small 15g slugs and shallow-diving lures will also work well when chasing tailor.

If you want to have some fun, small to medium size surface walkers and poppers are the way to go. It is not unusual to rack up half a dozen species fishing this way in the shallows, with anything from pike to whiting taking an interest.

My favourite lure for this method is the Bassday Sugapen walker. While this lure isn’t cheap, it casts well and has a great action. Any of the clear-bodied options are highly effective. It is not unusual to get the odd squid from the weedy areas north of Crab Island.

Squid are great eating but make even better live baits for big jew when fished on the change of tide in the Seaway. Using 20lb main line with a two-hook 6/0 snooded rig, 3 ball sinker and 40lb leader will give you the best chance of tangling with a Seaway jewfish.

Fishing an early morning incoming tide at Jumpinpin can be a good option for finding early season tailor. Trolling the area inside the bar down to the break-through on Kalinga Bank is the way to go. An early morning run-in tide is also the best time for catching garfish in the Broadwater.

The area on the southern side of Crab Island is quite productive, as are the weed beds on the inside of South Stradbroke Island to the south of Currigee. To hook garfish you’ll want a light and whippy rod, light line, a pencil float, a size 10 long shank hook, a stale loaf of bread for berley and some small pieces of green prawn for bait.

These fish can be a bit tedious to clean but are beautiful eating – almost as nice as whiting. The recent summer whiting season in the Nerang River was a bit different to seasons past, with a lot less rain than normal seeing the moon phases influencing the numbers and quality of fish more than usual.

It has still been worthwhile fishing the week after the moons but the whiting have been mostly male and about 30cm in length rather than those much bigger fish that everyone loves. Another thing out of the ordinary this season is the lack of fish being hooked in the daytime.

Again this can be put down to lack of rain and therefore very clean water. Normally by this time of year we have had at least one good flush washing a lot of whiting and food out of the canals and into the main river, which makes for good fishing.

This month will see the whiting on the move back upstream now that spawning is over, meaning from Isle of Capri up to Sorrento will be worth trying. Once we find where they are holding I will let you know.

The good thing about whiting fishing in the Nerang River from now on is the fact that the daytime fishing will improve dramatically. Wriggler worms and bloodworms will remain the best baits.

While not my preferred species, some good early season bream will be hanging around the marinas, rock walls and bridge pylons. Fishing Sundale Bridge is becoming quite popular thanks to all the extra pylons from the new light rail and pedestrian bridges.

Now is the time to dust off the surf gear as well, with the cooler evenings, lighter wind and calmer seas seeing solid bream and the odd tailor in the gutters north of Southport Surf Life Saving Club.

Offshore, late-season spanish mackerel will still be around and these fish will be much bigger than those hooked earlier in the season. The downside is they will be swimming much deeper, so slow trolling livies on a downrigger will be the most successful way to target them.

A few early snapper are also on the cards offshore, and hopefully we’ll see a good season like last year’s. I was recently asked by a reader to explain some of the knots we use for lure fishing.

The first knot is used for joining braid to the leader, and this knot is called the twisted leader knot. It is very easy to tie, even for old fellas with poor eyesight like me, and has good knot strength. Next is the loop knot, which we use for tying hard-bodied lures to the leader.

This knot allows the lure to work and vibrate much better than it would if using your normal hook tying knot. For soft plastics and blades I tie the same knot I use for tying my bait hooks on, while for poppers and walkers I prefer a loop knot.

Google and YouTube are the best places to check out these and many other knots if you need any help.

Wayne started fishing seriously 22 years ago, and 19 years ago moved to the Broadwater region on the Gold Coast because it had the best and biggest whiting in southeast Queensland, which is still true to this day. He works most Saturdays at Oxenford BCF and spends almost all the rest of his time fishing and crabbing the Broadwater and the rivers that run into it. Since moving there he has discovered that despite a lot of boat traffic it is still a great place to fish, with an amazing variety of species to catch.
Previous Awesome Land-Based Pelagic Action
Next Next-Generation Revo Spin Reel