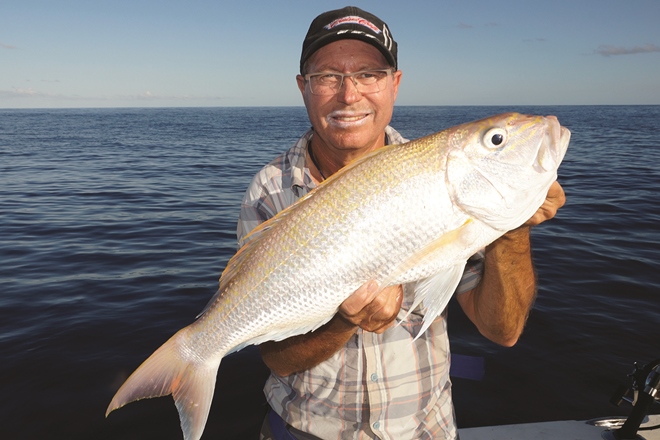 The author with the best goldband snapper of the trip.

AT last the weather gods have taken pity and provided us with some nicely settled days for local offshore action and Turkey Beach trip.

Additionally, falling water temps and a slighter current have really helped to work over those favourite locations in the backyard. After a spell of several months of bad weather, it’s been interesting to visit some of the spots that see a good bit of boat traffic most of the year and observe just how well the fish have stacked up in a short period.

For example, some nice teraglin have been biting on the 29-fathom reef, parrot on the flatter inside ledges of the 33-fathom, good pearl perch on the low ridging back ledges of the northern 35-fathom and even some nice snapper during the day on Square Patch. Some of the lesser-known places I like to fish have benefitted from the spell of bad weather too and it just goes to show you can nurture spots you come across for the long haul if you don’t get greedy and hit them too frequently.

Speaking of spells, it had been seven months since we last went to Turkey Beach for a fish out on the Capricorn and Bunker Group reefs. We really enjoy those Turkey Beach trips and the fishing is good too. We like to explore, push ourselves to be more inquisitive and get out of the standard routine of fishing where everyone else goes and look for something different. We found ‘something different’ this time by venturing a little further than on past trips and working deeper water just to see what happened. Spending time in the areas less frequented paid off and clocking up the kilometres burning precious fuel while working a broad criss-cross pattern helped identify some new ridges of reef and isolated structure. When we had recorded enough info it was time to work our way over them all and test the water.

It was nothing different to what we do on the reefs at home, except this time we spent more time on anchor around tide changes on spots with excellent fish shows down deep, and we had a two-day window of great weather to enjoy and take our time. The fish species initially weren’t much different to what you’d generally find on the inshore reefs, except coral trout weren’t present. A reasonable red emperor and plenty of hussar, redthroat emperor and parrot came aboard, then George and Damien landed some big pearl perch that were well out of the ordinary. Things were looking up.

After a while it went quiet, so given it was close to a tide change we decided to anchor on a steep piece of nearby structure covered in fish life. The anchor held perfectly in more than 80m and the run was only slight. George hit the jackpot first with a cracking red emperor that actually managed to pull drag on his 925 Alvey. A rare feat, as that Alvey was done up tight and the broomstick had one hell of a bend in it while ‘King’ feathered the base of the reel with his big palm. Once he started winning line, the Alvey went into that deep clunk, clunk mode that only happens when a big fish is hooked and Damien and I just gave each other that look, as George had done it again.

It was high fives after the gaff was sunk and we got straight back into a hot bite until after the tide started running hard again. The braid was pushed to its limit and the upgrade to Wilson 80lb fluorocarbon on the rigs and snelled Mustad 8/0 Octopus UltraPoint hooks was proving very successful. After that hot session, these rigs became the standard for the rest of the trip because they showed minimal wear and the hooks really held their points after a thrashing on plenty of hungry fish. There was already a good feed in the box and we were then inspired to work out on the deeper pieces of structure identified earlier in the day and try our luck.

I’m running a medium-frequency 1kW transducer on the 12” Garmin and we know from experience that switching over to CHIRP mode filters out the smaller fish and shows the bigger target fish as individual dots. On the first deeper spot, we went straight to using CHIRP mode because some big dots were on one side of a steep rise. Placing the boat up the drift line for the first drop yielded Damien a nice snapper, so on to the next one and another big patch of red dots saw large goldband snapper come up on the electric reels we had bought second-hand from Japan.

It was a pretty exciting afternoon doing the rounds of these pieces of structure because it was new country to us and was our first serious test of the electric reels in deep water. For the after-dark tide change, it was back into where we had anchored earlier and that’s where we stayed the night. On a glassy sea in a boat filled with upright flotation you feel really safe and don’t worry about much, provided you have some sort of watchkeeping arrangement.

The redthroat emperor had moved in and most of them measured 50cm-plus, but nothing big hit during the night so it was a good sleep well south of the shipping lane. North Reef light was a good night-time reference point and it was comforting to see the big ships passing well out of our range. Next morning saw us pulling anchor early after first light and out of curiosity we headed over to where the trip had started for a quick drift. The bigger pearlies were suddenly going nuts for the big baits and it was hard to leave them, but we had more exploring to do out deeper.

On the goldband spot, we had to sound around to find the fish because they had moved to another part of the reef overnight and it was a totally different drift line.

The good news is the goldbands were still there, as were huge pearlies and big snapper. George made another spectacle of himself with a great double hook-up of the largest redthroat of the trip and a big snapper. We were impressed by the consistent size of the parrot and redthroat out deep and the quality of the pearl perch was top shelf.

It was a pretty full-on morning and we were doing things like lifting the rigs to the depth the big dots were at on the sounder and getting slammed by snapper and redthroat. Sometimes they were just goldbands or even pearlies, but that was better than letting the big hussar steal the baits first. Check out the photo of a pearl perch coming up through the beam of the transducer after Damo hooked it in the middle of a patch of fish on the back side of a ridge in about 100m of water. Yep, great conditions and the electric reels made life easier too.

It was fun watching the rods buck and bend at various stages of the fight, wondering if it was the taxman visiting. You just don’t realise how good you have it when you can grab a sandwich to chomp on while another big fish is being wound up, but as George correctly said, he still prefers the Alvey setup when fishing less than 100m of water. Ditto with the overhead reels too.

After another frantic session, we had to do a careful recount of the fish so as not to exceed any bag limits. We were so close to the limit and glad of our self-imposed larger minimum sizes that we called it and went back into exploring mode to identify more lumps and bumps for the next trip before heading home. Having watched the beam of the North Reef light during the night, we headed inshore to it for some photos on a glassy sea when heading home and ran over so much ground outside the green zone along the way that we didn’t even bother marking it.

Battery power management is critical if doing one of these big solo trips, especially if using electric reels. The battery wired to the electric reel plugs installed by Trymax Marine Electronics is the house battery and we kept it isolated from the start battery whenever fishing, and when sounding around or under way we opened the isolator to allow the house battery to charge off the big alternator on the Yammy. Monitoring the voltage meter on the electronics screens showed the benefits of this strategy and it worked a treat.

We’ve all been eating well in our households since the trip and family and friends are enjoying the benefits too. You can bet it won’t be seven months until the next Turkey Beach trip.

Bill has been spearfishing, fishing and surfing for all his adult life and now runs a business specialising in teaching people how to cross coastal bars and fish offshore. He also runs charters for people who fish for the right reasons and whose company Bill thinks he will enjoy. He’s been running his bar crossing business successfully since 1996 and hopes to continue doing so for years to come as he grows old disgracefully.
Previous Melbourne Boat Show revs up for Whittley in 2018
Next Majorcraft Dangan Braid