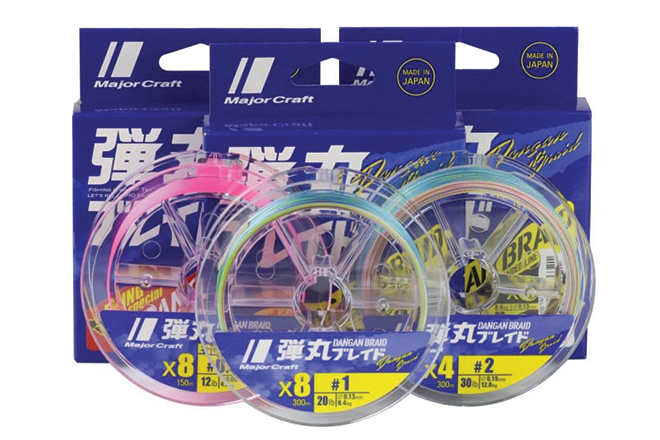 It is generally available in four and eight-strand varieties and Majorcraft has both. As the name implies, four and eight refer to the number of microfilaments weaved together. The difference is in the end product, with eight-strand being smoother and rounder.

This is because the fibres are woven differently to four-strand and the bundles are smaller, with a more even circumference along the length of the line or weave. It produces a supple, smooth line that is less likely to sing through the guides.

Eight-strand is generally more expensive to produce while four-strand is regarded as robust and less supple but better able to deal with the demands of offshore bait fishing for instance. It is also cost effective for a wide range of activities.

The new series covers general angling and squid fishing, with line available in both four and eight-strand, offering a top-quality line in two options. The Dangan Braid’s original yarn is a super-strong, polyethylene fibre made by Tobyo, which is custom twisted in a Japanese factory to develop a braid with lower stretch and higher sensitivity.

The Dangan comes in a range of strengths and is user friendly for beginners as well as having the performance needed for lure-casting anglers. Both variants have a super-smooth, slippery surface coating that reduces friction on guides and the reel, which increases casting distance and enables better line lay.

Majorcraft Dangan offshore and inshore line is multi-coloured in 10m increments, making it suitable as not only a casting line but a jigging option too. It is available in 150m and 300m spools from 12-50lb. Dangan Egi is pink and available in 8, 10, 12 and 14lb line classes in 150m lengths and can be used for estuary fish such as bream too.