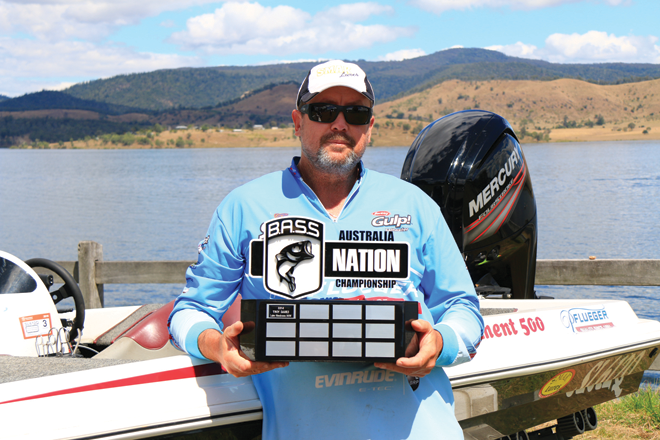 THE Atomic B.A.S.S Australia Nation Series has gone from strength to strength each tournament, with an increase in competitor numbers and the buzz surrounding the events on the B.A.S.S. Australia Nation media platforms being higher than we ever expected for 2015.

Realistically this is due to great support from our sponsors and of course the competitors, who all need a very big pat on the back for living the passion that is driving this sport to the forefront of many anglers’ minds. With 64 anglers coming from all corners of the east coast of Australia, we have finally got a true national bass championship worthy of the name.

With the best of the best bass anglers competing over the weekend of the Megabass B.A.S.S. Australia Nation Championship at Lake Somerset, we knew the wins in both divisions would be very well deserved. And so they were. The fishing was tough, hard on gear, hard on anglers’ spirits and eventually just two anglers remained on top of the championship podium.

What a way to finish the most epic year of bass tournaments Australia has ever seen, with Steve ‘Killer’ Kanowski taking out the championship with a great 3.02kg bag in the final session. Coming from fifth position at the start of the final session, Steve went out with big bass on his mind and swung for the fences, landing the largest bag weighed in by a Pro Angler for the entire tournament and snatching victory from local Somerset gurus Steve Otto and Dave Young.

Steve, from Shorncliffe in Queensland, managed to land five out of six bass for a total of 5.28kg in what was a very tough bite. With bass in excess of world record size swimming around prior to the event and reports of 6kg-plus bags coming in left, right and centre, we anticipated an absolute slug fest. But with diverse weather patterns playing tricks on the local bass and anglers, it was not to be.

Steve employed exactly the same setup he used to win the JML Somerset Slam in the first round of the year. The setup consisted of a Pflueger Patriarch 6’10” 1-3kg spin rod matched with a Pflueger Supreme 2000 reel, 4lb Berkley Crystal FireLine and 8lb Berkley Sensei fluorocarbon leader. As the tournament winner, Steve will now head to Monroe, Louisiana in the US to represent Australia in the B.A.S.S. Nation Championship and compete against 62 anglers from around the globe.

If Steve has success at the US Championship he will have the opportunity to go to the Bassmaster Classic, (the world championship of bass fishing) where $US300,000 and eternal fame are up for grabs. One of the most important divisions in the Atomic B.A.S.S. Australia Nation Series is the Co-Angler division. This is the level where many anglers can come into the sport on a budget and learn about the craft, new techniques and tournament fishing while fishing next to the best anglers in Australia.

A very emotional and proud Garry Harmen accepted the Co-Angler Championship trophy on stage with his young family in what was a domination of the tournament. Garry not only took out the Co-Angler division from Mark Bleys by nearly 2kg, but his second closest competitor from either division was Pro winner Steve Kanowski.

Garry Harmen is a concreter from Gatton, Queensland and he’s been into bass fishing for five years, only starting competing in tournaments at the start of the year in the Damiki Lake Glenbawn Challenge. Garry has taken this time to learn from some of the best anglers in the business, travelling with the Smak crew to each and every tournament, pre-fishing with the group and working with the crew to establish patterns on each dam including Lake Somerset.

Unlike the situation for many other anglers, this group works together to help each member, creating awareness of locations and techniques and boosting the chances for the entire group. Garry had worked out that burning paddle-tailed plastics through the schooled bass was critical to entice bites.

Mixing up the countdowns of the lure and using heavier 5/8oz jig heads for longer casts and a flatter swim path were another couple of ingredients in his win. As the winning Co-Angler, Garry also won a trip to the US in 2016 to compete alongside next season’s champion. What a great opportunity to plan, travel and pre-fish alongside a Pro Angler in the US and compete in the B.A.S.S. Nation Championship as a Co-Angler.

This will give Garry experience and confidence to further his career over the coming years, so keep an eye out for him in future reports. Next season has been set up very similarly to the last, with three qualifying tournaments in NSW, three in Queensland and one in Victoria.

The Championship will be held in NSW and again the winner will head to the US to take on the world’s best.

If you are interested in finding out more on the coming season, find us on Facebook or visit www.bassaustralia.com.au