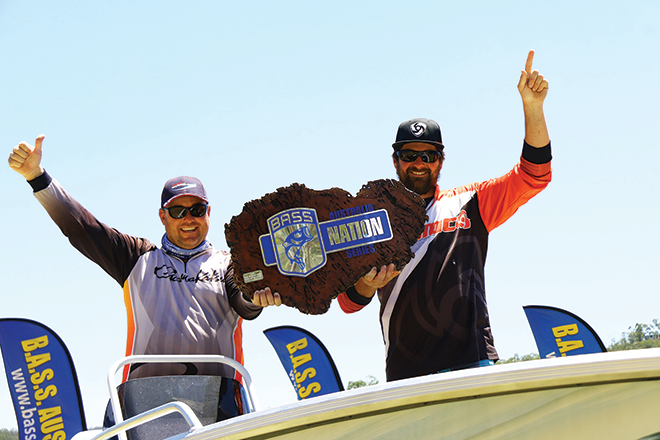 WITH 40 of the best bass teams descending on Lake Boondooma to compete in the Haswing Marine Australia and Bluefin Boats B.A.S.S. Australia Nation Team Championship, we had a feeling the big bass would bite, and Lake Boondooma didn’t disappoint, with massive brawlers hitting the decks in a total shootout.

Team Atomic/Bassman Spinnerbaits consisting of Grant Clements and Adrian Melchior of NSW took on all comers and managed to bring in consistent bags of over 5kg per session to claim the title, which included the ultimate prize of a $30,000 Bluefin boat and Evinrude motor package fitted out with a Swiftco trailer. The Team Series is fundamentally set up to get people involved in tournament fishing at a very reasonable price, with the bonus of a massive prize pool to entice the pros to come along and compete.

We get a great mixture of anglers competing, from father and son teams to husband and wife teams and best mate teams, which adds to the comradery and encourages participation. With NSW winning this year’s Team Championship, those from the state have bragging rights over the Queenslanders for a season, and with the Championship heading to NSW for the final next year, they will be favourites to go back to back.

Adrian and Grant had a great season, with top finishes at most events, and they were ready to pounce come championship time, fishing an old technique that has come back into vogue over the past 12 months. The key lure was the good-old 20g Halco Twisty that the guys had tricked up with Atomic Trick Bitz. Adrian and Grant had worked out that they needed to trick the lure up to increase the hook-up rate, so they removed the standard rear treble and replaced it with a set of Atomic Assist Hooks in size 4 and colour 01, subsequently smashing bass of all sizes.

Fishing just inside the roped-off area of the wall region, the anglers found a massive school of bass located on a ridge running into a creek at 13.5m deep. They focused their casts along the ridge, letting the lure fall all the way to the bottom before starting a steady retrieve. If the bite slowed, they would mix it up and burn the lure back to the boat.
Often this was when the big bass really hit hard.

The go-to setup for the Atomic/Bassman team was Samurai Infinite rods (fin-10-M69 model) matched with Daiwa Steez reels (2506 Spin) spooled with 6lb Unitika Aorika main line and topped off with 6lb Unitika Aiger leader. Leading into the final session, they had other boats around them but this didn’t matter because they just kept catching big keepers and upgrading through the entire final session.

Keep an eye out in season four because these guys will have their confidence up and be looking to replicate this form into the pro-am series as well as going back to back in the team events. Both Greg Mitchell and Terry Allwood of Team All Random are right in the middle of a form patch. These guys are fishing very well, competing strongly against the best the country has to offer.

Terry recently took out Rookie of the Year and missed being the overall Samurai AOY Champion by a single point in season three of the Atomic Pro-Am Series. Again they showed everyone why they should be the ones to watch, scoring second place in the Team Championship and taking it right down to the wire with the eventual winners. They were also using the same technique and lure as Team Atomic/Bassman.

Speaking to Terry after the event, he said they didn’t know Grant and Adrian were also fishing a Halco Twisty tricked up with Atomic Trick Bitz. Regardless, they used exactly the same products, even in the same colours.


Also fishing at the wall, Terry and Greg would catch their limit and then move out to the lake looking for larger specimens off points and spots that had produced in the past.

Then after resting the area near the wall, they would come back and hit it again, rotating this pattern throughout the sessions. Terry and Greg used a combination of rods and reels including a Samurai Reaction (model 302) matched to a 2500 Daiwa Certate reel spooled with 10lb Unitika Light Jigging braid and Unitika 10lb leader. Confidence is key in tournament fishing and both these anglers are on the rise.

It will be interesting to see how they challenge for the titles in season four. Mitchell and Jordan Renz of Team ACM Rods/JML Anglers Alliance weighed in the second-largest bag of the tournament in a single session, the largest bass of the tournament and caught some amazing bass while doing something different from the majority of the pack. Fishing an area around the Junction called Leisegangs, Mitchell and Jordan focused their lures a lot tighter to the banks than most and worked them in just a few feet of water to catch a lot of their fish.

Positioning the boat in 4.5m of water and using their Lowrance Insight Genesis maps, they figured out that slowly tapering banks were working the best because the bass were sitting just above the weed beds early in the morning. The key lure was a Nories Inlet Minnow 3.5” fished with a 3/8oz jig head. Retrieved slowly, the guys imparted plenty of shakes and twitches during the retrieve.

They said the Nories range features a brilliant variety of colours perfect for Australian bass. Their go-to rod and reel setups included an ACM Custom rod (IP841) matched to a Daiwa Certate 2004 reel spooled with Yamatoyo Resin Sheller 9lb braid and 9lb Yamatoyo fluorocarbon leader. These young anglers have an amazing amount of talent and ability, and with incredible knowledge of the Queensland lakes it will be interesting to see if they step up to the Pro division in coming years.

Understanding that they are still working on their careers in Bundaberg, getting time off is difficult but if they decide to step up all the Pros really need to look out because they will be taking cheques home on a regular basis. Next season as the major prize for the series we will be sending the Championship-winning team to the US to compete in the Bassmaster team Championship, making the Team Series bigger and better than ever before.

If you are interested in seeing more about the tournaments, check out all the details at bassaustralia.com.au