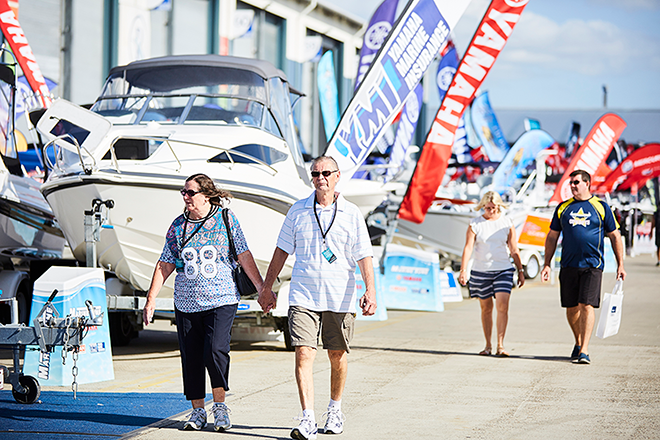 THE first major event of the 2017 Australian boat show season will be staged in March right in the heart of the nation’s recreational boating industry capital on Queensland’s Gold Coast.

This year the Expo will be operated and managed with the support of the Boating Industry Association – Australia’s peak industry representative body, and held at the Gold Coast Marine Precinct at Coomera. BIA national chief executive Howard Glenn said the March boat show dates will be the catalyst for an exciting new era for Australia’s marine industry.
“The timing of this March event is seasonally important for boating enthusiasts and it also opens up an exciting opportunity for our industry to continue to innovate and grow,” Mr Glenn said.

The Expo’s dedicated Event & Marketing manager Emma Brown will lead the boat show management team to ensure a smooth transition to the March dates.
“A standalone Gold Coast International Boat Show & Marine Expo means the Expo we all know and love will be able to continue to grow and build on its proven success – 2016 was our biggest show in six years,” Mrs Brown said.

“The new March dates create further lead time for our exhibitors as existing boat owners can prepare for the coming summer – fresh in their minds are their considerations for repowering, replacing or upgrading their boat’s systems and accessories, or buying a new boat or yacht to further enhance leisure time with their families next season. “For manufacturers, importers as well as accessories and service providers, the pre-winter campaign timing is a business imperative.”

Mrs Brown said the full support of the BIA is immensely significant and welcome. “The skills, resources and experience the BIA brings to the table will be invaluable for our boat show, and for our industry as a whole,” she said. “With our new dates, we are now taking ‘the boat show with so much more’ to a whole new level.”

Applications to exhibit at the Expo were released recently.  Exhibitors are invited to register their interest by contacting the show team via gcmarineexpo.com.au

If you love boating, you’ll really love the Gold Coast in March. A solid platform for further success The Expo was created by marine industry leaders in the extremely tough economic times of 2011 to help the boat industry get back on its feet.

The event has today transformed the concept of a traditional boat show by engaging, educating and entertaining over 100,000 visitors, many of them new to the boating life. In addition, the Expo has delivered outstanding returns on investment for marine industry exhibitors. Based on direct sales for exhibitors, the Expo has in the past two years alone injected over $100 million into the Gold Coast and Queensland economies.

In 2015, the Expo was named Australia’s Best Exhibition at the Australian Event Awards – the same year it changed its dates from November to May.  The 2016 Expo – a national finalist for the Best Exhibition award – was the largest in the event’s six-year history. “The Expo’s visitor and exhibitor feedback revealed over 77 percent exhibitor satisfaction with the return on their Expo investment, with over 74 percent of 2016 exhibitors committed to exhibiting at the Expo in 2017,” Mrs Brown said.

“In fact, not one single 2016 exhibitor who responded to our survey stated they would not return to the Expo in 2017… and that’s extremely encouraging as we move forward.
“Our visitor feedback was also overwhelmingly positive – almost 58 percent were first-time visitors to the Expo, 62 percent were regular boaters, 56 percent stated they came to the Expo with the intention of making a purchase and 38 percent made major purchases at the Expo.

“The interests of the Expo’s 2016 visitors also spanned a wide range of boating interest sectors – 34 percent luxury motor yachts, 38 percent equipment and materials, 43 percent family cruising, 28 percent engines and outboards and 53 percent fishing and trailer boats.  “Of course, the true business impact of the Expo continues to flow many weeks and months, even years after each event.”