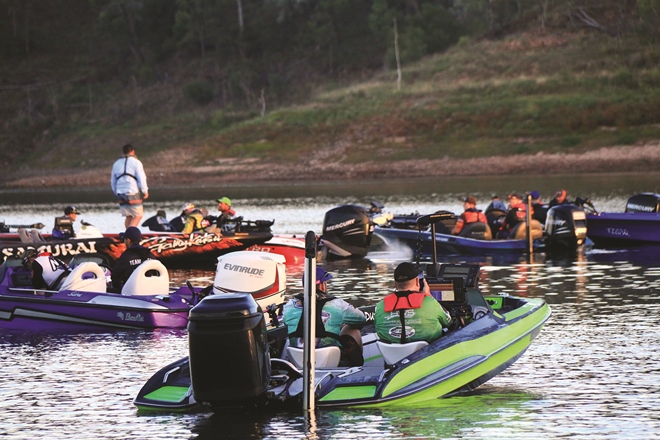 You’ll see some serious boats in the tournaments.

AS 2018 starts to take shape, the B.A.S.S. Australia tournament scene is already in full swing and this is one of the busiest times of the year for anglers.

Proper preparation is the factor that separates a standard weekend recreational fisher from a hardened tournament guru, and over the well-earned Christmas break every angler has the opportunity to get his or her gear and mind together for the big season ahead. Not only does the boat have to be up to scratch with the mandatory motor, trailer and hull checks but the kill switch, live well and electronics must be up to date and ready for what lies ahead. The tackle preparation is enormous, with evolving techniques seeing brands constantly introducing new lures.

As part of their preparation, some anglers will have over 30 rod and reel combos to respool and service for 2018. Lure trays will be cleaned out, rod lockers stacked in order of useability, and of course past results and fishing maps need to be examined. The research is endless, no matter if you have fished a location a hundred times or never before. Each little edge will help you put larger bass in the boat. The best place to start looking is the internet.

With careful wording, different search engines will produce differing results. Each engine will give its interpretation of what is more popular and looking down the list can open up small but detailed descriptions of past fishing stories that can turn the tide of information in your favour. Even the most accomplished anglers such as Dean Silvester look over countless web pages searching for something special. When Dean recently travelled to the US to compete on the global stage in the B.A.S.S. Nation Championship, he spent three to four hours every day in the lead-up sifting through websites and past results.

Yes, preparation is huge in the off season and with 16 events scheduled over the next nine months, the B.A.S.S. Australia anglers are ready and willing to take on the challenge to become the best angler in Australia. This season we have events in NSW and Queensland for the Berkley B.A.S.S. Australia Pro-Am Series where a lucky Co-Angler will win a TABS boat matched to a Honda outboard for a major prize valued at well over $20,000, which will give the angler the opportunity to step up into the big league and have a crack at the top level of competition in Australia.

The best two Pro anglers for the season will win their way to the US to represent Australia in a tournament with over $300,000 worth of cash and prizes on offer, giving them a one in 20 shot at making the Bassmaster Classic (the world championship of bass fishing). This is the best tournament they will ever fish.

In the TABS Boats B.A.S.S. Australia Teams Series we again have events run over NSW and Queensland, with the top prize being a trip for two to compete in a team event in the US against a massive field of well over 160 boats. This is the trip of a lifetime with a mate, wife, husband, son or daughter and will give you an opportunity to travel overseas to fish one of the most exciting tournaments in the world: the Bassmaster Team Championship. Imagine travelling with a good friend or family member with expenses paid for you to both compete for major cash and prizes. It is a tournament angler’s dream.

We also have the Native Watercraft B.A.S.S. Australia Kayak Series that is scheduled across NSW and Queensland, and at each round a Native Watercraft kayak is up for grabs as first prize, with the major prize being a trip to the US to compete in a B.A.S.S.-sanctioned event.

All these tournaments are open for anyone to compete in and are not just about super-serious fishing – they are social and a lot of fun. You will learn a huge amount about lure fishing for native fish too, which will give you the edge on your next fishing trip.

All three series are set up for anglers to fish on a budget and give maximum exposure to the winners of each round, so grab a mate and come along to have some fun.

For more on the B.A.S.S. Australia tournaments, check out bassaustralia.com.au