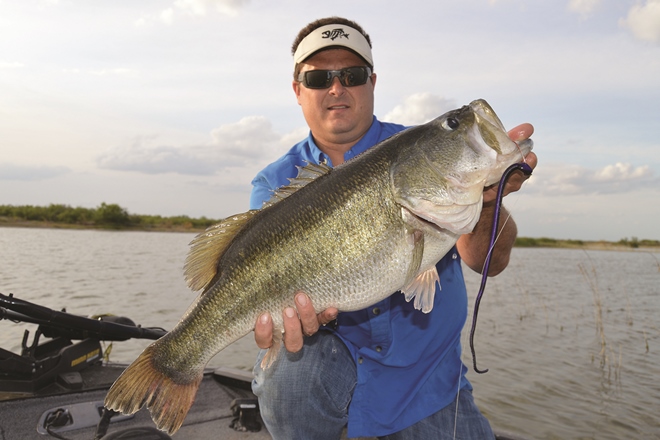 Bass as big as Texas

A PAIR of Mexican mallards swooped overhead as Blair Schwarz cast towards a row of mesquite trees along the shoreline of La Perla Lake, Texas, US.

Touching down, the long D.O.A. Sna-Koil lure slithered just above the surface before recoiling after a short pause. Within seconds, Blair’s rod curved into a tight arc as a basket-sized mouth exploded from the water. After a tense tug of war, Blair eventually wrestled the monstrous fish boatside before landing it with a net. While snapping a few photos, I asked Blair how big he thought the fish was and he said about 12lb. I asked if that was his biggest and he said no, he’d caught a 14lb fish last year.

They say everything’s bigger in Texas, and just south of Laredo, the 5000-acre La Perla Ranch proves just that. Home to trophy whitetail bucks and hulking largemouth bass, Zapata County’s famous La Perla Lake is among several man-made lakes that make up this southwest Shangri-La. Blair’s father and ranch owner Dr Gary Schwarz said he wanted to create the ultimate fishing experience. “Our guests can expect to catch on average around 50 to 80 fish per day weighing anywhere from 3-10lb, with 12lb and 13lb fish common,” he said. Impressive numbers for sure, but how did a ranch deep in the south Texas brush country become a trophy bass destination?

Excavating millions of tonnes of soil, Schwarz carved out a 100-acre lake he named La Perla with over seven miles of shoreline to optimise the angling experience. Leaving no detail overlooked, he added submerged timber, rocks, islands and beneficial vegetation, then added a network of elevated ponds adjacent to the main lakes in order to grow supplemental forage to be flushed in at different times of the year. A few years ago, Gary was stocking the forage ponds with threadfin shad, bluegill and fathead minnows and began looking for other high-protein species that would turn the most biomass into protein per dollar invested. That’s when he discovered the freshwater prawn.

Weaned on a healthy diet of catfish feed, these large, slow-moving crustaceans resemble a cross between a lobster and a shrimp, and became a crucial piece to the La Perla puzzle. The limiting factor for something that eats something else is: can it catch it? And if so, how many calories did it expend to do so? The prawns became the perfect match.

Schwarz stocked La Perla with genetically superior pure Florida-strain bass, and later hybridised fish (F-1 crosses between pure Florida and native largemouth marketed as tiger bass). Retired Texas Parks & Wildlife Department biologist Allen Forshage said to grow giant bass, you must have only pure Florida genetics. Pure Florida largemouth have heritable characteristics that allow them to grow larger than any other strain of bass in the world. If mixed with hybridised fish, this characteristic will eventually be bred out of the population, and hybrids won’t grow as large as the pure Florida strain.

And that’s good news for Schwarz, who in 2014 signed a 15-year contract with the TPWD allowing it to use a completely new 60-acre lake named Jalisco he created for research purposes.


Stocked only with Operation World Record genetics, the path to grow the next world-record bass became clearer, as Jalisco combined the best elements of La Perla with an upgraded design and forage plan creating a new and improved big-bass factory. “Gary built and manages the lake, and we stocked it with our Operation World Record fish,” Forshage said. “Under the terms of the agreement he’ll follow the State’s recommendations for the next 13 years.”

With the combined talents from both their areas of expertise, Schwarz is so enthusiastic about the project, he’s even covering the bulk of the cost to prove his passion is strictly for the outcome and not money. “My goal is to be a part of a co-operative merger between government and private business that will benefit the good of trophy bass fishing here in Texas,” he said. “Allen’s the genetic superstar and I’m the wildlife nutrition superstar, and together I believe we can make Texas the home of the next world-record largemouth.”

And from bass fanatics across the globe, here’s to hoping some day they do.