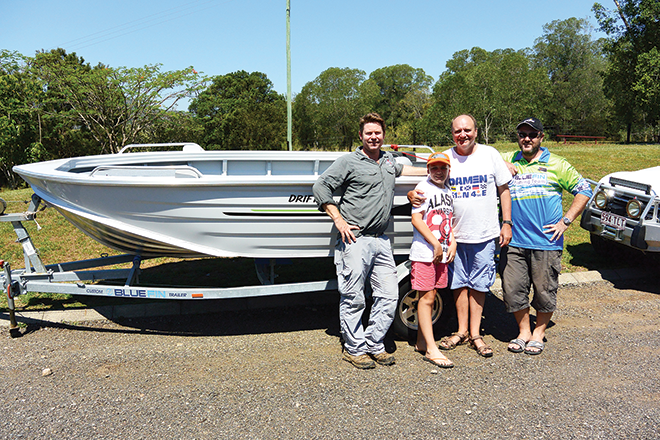 The author with Scott and William Morrison who were the lucky winners of the Bluefin Drifter Deluxe. Brad Richey from Bluefin Boats (right) was on hand to present the boat.

This was the first year the competition had been held at Moogerah. For the past three years the comp was held at Maroon Dam under the banner of the Bluefin Lake Maroon Fishing Classic. Competitors enjoyed the new venue at Camp Moogerah, with plenty of cabin accommodation and camping areas on offer.

The huge air-conditioned hall was a godsend in the extreme heat we encountered over the weekend too. Great fish were caught, with Mitchell Petty taking out the senior longest bass category with a 53.6cm brute hooked on a purple Z-Man paddle tail soft plastic and 1/2oz jig head. Matt Home collected a 52.8cm yellowbelly to win that category, Johnathan Dionysius landed the longest silver perch at 42.7cm and Peter Milner just edged out a couple of competitors in the eel-tailed catfish category to take the win with a 52.1cm specimen.

The Overall Champion Angler was calculated by recording the longest fish of each species caught by an angler. This title was won by Shane Whell who captured a total length of 183.3cm of fish. The junior division was dominated by the Whell and Hunt families. Hunter Whell picked up a 46.5cm bass, Rhyleigh Whell a 48.9cm yellowbelly and Justin Hunt a 42cm silver perch and 51.3cm catty.

Justin Hunt also took out the Overall Junior Champion Angler award with a combined length of 175.3cm.The weekend had a very relaxing feel and it was an enjoyable event to host. Those who competed did so in the right spirit. The category prizes were donated by Wilson Fishing, Damiki, Evakool, Bush ‘n Beach Fishing magazine and Queensland Fishing Monthly.

The senior lucky door winner was Scott Morrison who walked away with the 4.2m Bluefin Drifter Deluxe. Hudson Hammond was the lucky junior who collected the 3.0 Bluefin Catfish. Thank you to Barry for hosting the comp at Camp Moogerah and to all the generous sponsors who made the event possible.