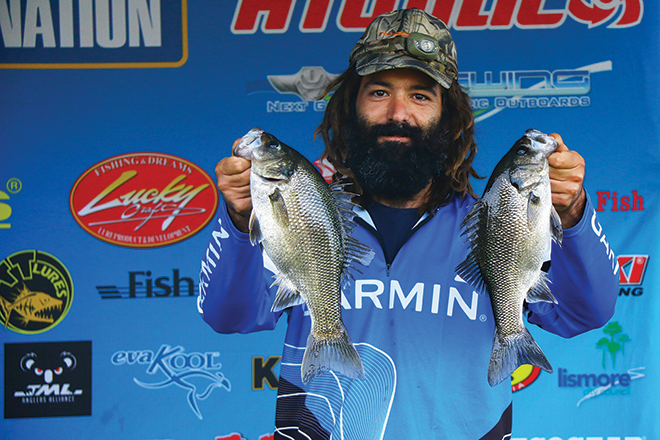 VICTORIA isn’t really known for its bass fishing, and as we headed down on the 2000km road trip I admit I was a little concerned about the capture rates and prayed the anglers competing in the Fish Arrow Blue Rock Blitz would catch some bass for the weigh-in.

Well the fishing turned out just fine and the fishery is being managed well, which is a testament to the local community and Fisheries Victoria continuing to stock the lake with fingerlings. We fished Blue Rock Dam in 2014 and boy has it improved.
The quality and number of bass in the lake have both increased, and every fish brought to the scales looked extremely healthy.

The majority of anglers actually used a technique that works well in NSW during summer: vertically jigging Black Berkley Gulp Minnows. Dave Mann had a stellar tournament and he has an incredible ability to perform very well on this lake.
After fishing three tournaments on Blue Rock over the past three years he’s ended up with two wins and a second place.

With experience on this lake, he headed to his go-to areas up the Tanjil arm for the pre-fish and found a 38cm bass. Only catching one bass isn’t a pre-fish plan that guarantees success, but with a tough bite reported by most he had some confidence heading into day one of the tournament.

On day one Dave went straight back to the location and worked out the bass were coming through the area every now and then and were willing to bite. He focused on a specific tree and used the popular vertical jigging technique to secure his solid limit.

Dave was fishing a Berkley Gulp Minnow Grub in Black in 7.5-9m of water, and only worked the lure a metre off the bottom before letting it drop back. Using his Lowrance electronics he discovered the bass were either stationed right on the bottom or coming through occasionally.

Matthew Langford from Kingaroy, Queensland travelled south with a group of anglers to take on the southern impoundment and grow their skill set in the process. Matthew also secured a starting spot in the Megabass B.A.S.S. Australia Nation Championship with his second place finish.

He had worked out a shallow-water pattern that involved casting lightly weighted plastics to the edge and working them into the second-tier drop off and through the thick timber-lined banks. Heading right up the back of the lake to the Tanjil arm in both sessions, Matthew predominantly used a 1/4oz TT DemonZ jig head in Watermelon colour rigged with a Z-Man Slim SwimZ in Watermelon Red to fish the open banks.

When hitting the heavily covered banks he used a 1/4oz Strike King Tungsten jig rigged weedless with an Ecogear Power Shad in Rainbow Trout. Matthew covered both presentations in Egimax catch scent, which he feels entices shut-down bass to strike more often. Matthew was one of the few anglers in the tournament who used a different technique, proving that sometimes it pays to look at different options when out fishing and take notice of what the bait in the area is doing.

Peter Jenkins from NSW came flying home in the second session, putting one of the largest sacks of the tournament together to claim third place. Peter used a technique he is very familiar with, and that’s vertical jigging. Fishing up the arm in the trees, he used his Lowrance electronics to find the fish and subsequently present the lure in 7.5-9m of water.


Using his Insight Genesis maps, Peter was able to stay on the contour lines and keep his lure in the strike zone for longer, managing seven legal bass in the second session. Using a 1/6oz Nitro jig head with a Black 3” Minnow Grub, he combined his Millerods Bream Buster rod with a Stella 1000.

The go-to line for Peter is Sunline, and he used Sniper 3lb fluorocarbon to execute his technique. In the Co-Angler division, local angler Ben Faro claimed first prize by weighing in the largest bag of the tournament. Ben fished with Matthew Langford on day one and used an Ecogear Grass Minnow in black and gold colour rigged weedless.

This allowed him to get the plastic deep into the thickest structure and swim the lure through the brush. Garry Harman ended up in second position with newcomer David Boyak rounding out the top three. Both these anglers fished the Black Gulp technique mentioned and will be making an appearance at the Megabass Championship later in the year.

This brings us to the current Samurai Rods Angler of the Year standings. With only two rounds to go, the race is really heating up in both divisions. In the Pro division, Queensland local Terry Allwood is still holding top spot from Dean Silvester, with last year’s champion Dane Radosevic running in third.

Many points are still up for grabs, and Mitchell Cone from NSW is making an end of year charge that might push him right over the top. In the Co-Angler division, Dylan Fryer has one hand on the representative trip to the US, but Garry Harman, Mark Petersen and Patrick Conduit have other ideas, and with a maximum of 100 points still up for grabs the AOY race is very much alive.