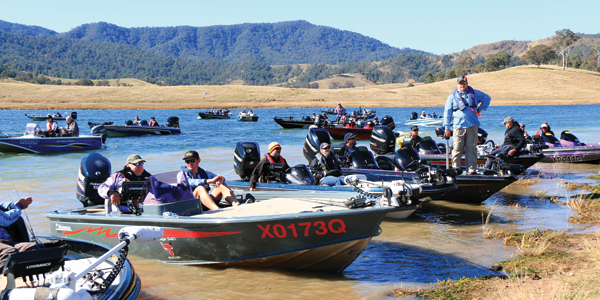 A large number of anglers entered the Lake St Clair round to make for a very competitive event.

LAST year we hosted the first-ever Atomic BASS Australia Nation event at the iconic Lake St Clair. It was one of the most exciting bass tournaments held in Australia for some time. Finally an official tournament series was up and running where the angler could officially qualify to represent Australia on a global stage in the US.

The turnout was strong, with the best anglers coming from far and wide to compete. This year the event went up a notch and the TT Lures St Clair Classic featured the strongest field we have seen, with local favourites hitting the water to take on the interstate champions who had travelled so far to compete.

Regarded as one of the really nice guys on the circuit and an absolute expert angler, Alan McNamara took the win from an extremely tough field. Alan has been in form of late, and this win cements his name in history as one of the greats of the bass circuit.

Don’t kid yourself: it is one of the hardest things on the planet to win a tournament against this calibre of anglers. Everything must go right and you need to prepare your boat and tackle meticulously to ensure you have no shortcomings. You must rely on all your experience to judge what pattern is working and then adjust to the conditions throughout the three days of fishing.

Even when you do all that, you still need to put bass in the boat, and under pressure it can become a hard thing. Alan did it all well and took home the $4000 TT Lures cheque as well as prizes to secure his win and instantly qualify for the Megabass B.A.S.S. Australia Nation Championship to be held in September at Lake Somerset.

After being disqualified at a Lake Glenbawn round earlier this year after returning late, Alan wanted to make amends and secure his spot in the championship. He made no secret of the fact that he put work into his pre-fish. “Only two weeks earlier I fished in the Family Bassin tournament and it went very well,” Alan said

“We won it overall, so after that I was pretty confident that I had established a game plan ready for B.A.S.S. Australia Nation. “My game plan was to fish the inside edge of the weed and I worked between the weed and the edge.” Alan said he kept moving around, which was important to his success.

“My technique was to have the boat sitting on top of the weed, cast forward to the edge and retrieve the lure slowly with lots of shakes and twitches until I was back to the weed,” he said. “I knew that whatever bank I fished I would get a bite, especially if it was towards the back of a gully or bay. “I also caught some of the bigger fish out the back of these bays and gullies. “I wasn’t afraid to fish banks that I hadn’t pre-fished either.”

His winning gear consisted of a 1.5” Slider in Muscadine colour on a 1/6oz jig head, as the hook needed to come out of the plastic as far back as possible. A Millerods Control Freak SMHBass XFLC 7’3” rod matched with a Shimano 1000 reel was Alan’s chosen setup.

In second place and currently holding down the lead in the Samurai Rods Angler of the Year points race is young gun from the Sunshine Coast Dane Radosevic. Dane is an absolute credit to the fishing community and his family. His confident yet humble attitude has him competing and beating the best in the business on regular occasions, and his work ethic will see him pose a real threat in the future.

Dane went into detail about his lure of choice and the rod and reel combination that assisted him in his second-place finish. “The one lure that I used all weekend was the Z-Man Slim SwimZ in Watermelon Red, which I cut down in profile and matched to one of the new TT Demon jig heads in 1/6oz with a 1/0 hook,” Dane said.

“This range of jig heads is the new tournament series paint heads, and they helped give the presentation a realistic look and an irresistible action. “The shape of this newly designed head gives the plastic a tight shimmy/body roll with the added vibration emitted from the paddle tail.”

Dane’s rod of choice was one of Brad Clark’s Barrabass Custom Tournament rods in model IP841. “This rod has a moderate taper with a soft tip but plenty of power down low,” he said. “It enabled me to create maximum action to my lure through short sharp shakes of the tip, and once a bite was felt, the power to set the hooks.”

Matched to Dane’s rod was a Daiwa Certate 2000 spooled with 10lb Unitika Light Jigging braid rigged with 12’-14’ of 6lb Sunline FC Rock leader. Third place went to an angler who is coming into form at the right time of year, and he has the record to make any angler wary.

Matthew Mott not only came out and took third place in the sixth round of the Atomic B.A.S.S. Australia Nation Series, but the result has him sitting in second position on the Samurai Rods Angler of the Year table and ready to pounce in September.

Matthew fished a little differently to the rest of the field. He went wide of the edge and used a Plum Slider with a 1/6oz Nitro jig head custom painted by Smak Lures. His rod and reel combo comprised a Pflue-ger Patriarch 2-5kg 6’10” rod, making it easier to finesse hop the soft plastic through the bass, and a Daiwa Certate 2000 reel.

Matthew Langford has had an incredible year, taking out the first round and now the TT Lures St Clair Classic in the Co-Angler division. Matthew is also heading the Samurai Co-Angler of the Year race with this win. However with four anglers still in the hunt, it will be a tight finish with one round to go.

Matthew used a 7’3” custom Ian Miller rod matched to a Shimano Stradic CI4 reel. He fished a mix of 1/4oz Bassman jig head-rigged Eel-coloured Ecogear Power Shads cut down to 2” and Z-Man Slim SwimZ in Watermelon on TT 1/6oz jig heads custom painted by Dane Radosevic. Chris Lindsay has only been fishing for a few years, and this is his first year fishing tournaments, but his incredible focus and attention to detail has him sitting towards the pointy end in the Samurai Co-Angler of the Year points race.

Coming in second, Chris’s lure of choice was an Ecogear 3” Power Shad in Eel colour, and his rod and reel combo was a Shimano Stradic CI4 2500 reel matched to a Phenix M1 4-10lb spin rod. Rounding out the top three in the Co-Angler division was Jordan Riddle, who used a Baby Slider in Watermelon Glitter colour on a 1/6oz jig head. His rod was a Samurai 2-6lb 7’ 203 rod paired with a Pflueger Infusion reel.

Jordan is another angler to look out for in future because his passion and drive will keep him near the top over coming years. The Samurai Angler of the Year champions will be finalised after the Megabass B.A.S.S. Australia Nation Championship is held at Lake Somerset on the weekend of September 12 and 13.

At this tournament we will crown two new Australian Champions and both will be heading to the US to represent Australia, one as a Pro Angler and one as a Co-Angler. In next month’s edition of Bush ‘n Beach we will also have the results of the Haswing B.A.S.S. Australia Nation Electric Championships and lots more.

For more information and complete results visit the website.