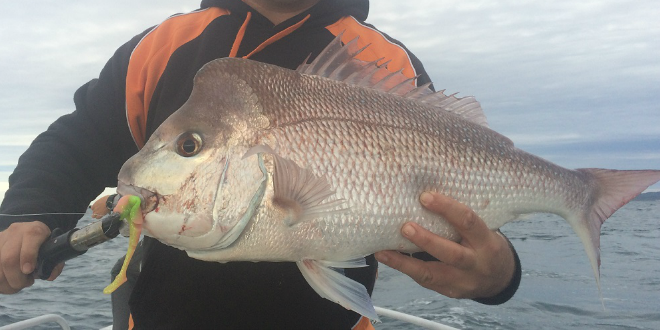 A proud author with his PB.

MY mate Matt Clem from Coffs Harbour recently called me and said he wanted to try fishing for Minnie Water snapper. Minnie Water is located east of Grafton in NSW, and I’m no expert at snapper fishing, so to spend some time in a boat with Matt, who fishes primarily for them and does quite well, was a no-brainer.

I contacted another couple of fisho mates in Justin Powell and Daniel Outerbridge to get a boat together, ran it past the opposition and before you knew it we were heading to Minnie Water for what proved to be an excellent weekend of fishing.

The trip started with three boats but was soon down to two due to work commitments. We were able to put the bait fishers in one boat and the plastics fishers in the other. This was initially done for convenience but things soon got competitive.

Because none of us had been to Minnie Water before, we had no marks to work off, only Navionics charts that showed where some humps in the reef were. It turns out these humps were all we needed and all were within about 1km of land. We were a week out from the full moon and it wasn’t long before I had my first red rock cod on board, closely followed by a bunch of sergeant baker.

The first 30 of these fish on an assortment of Just Jiggin soft plastics was entertaining, but with no sign of snapper in between, it soon wore thin.

Moving closer to shore and fishing in 20m of water, we drifted over one of the gradual humps that showed good fish on the sounder. Within seconds we not only had our first hook-up on snapper but it was a double.

Preferring to start light, my 2-5kg Gary Howard rod carrying 20lb braid, 25lb leader and a 100mm Swimerz Curly Tail in Mullet was doing it tough. I knew my line strength was there but my rod felt close to maxed out and in danger of breaking. I took a moment to look over and see what Matt was swearing about.

His 10-12kg outfit, which was filled with 30lb braid and leader and a Z-Man 5” Scented Jerk ShadZ in Bleeding Banana, was bent at the butt. It flattened out for a little while when the fish hit the bottom and took off for the horizon, but it severed ties with Matt a few seconds later. My fish came up after a couple more minutes and a 54cm PB snapper was in the boat.

As stoked as I was, seeing Matt lose a good fish on heavier gear than mine saw me quickly change to my 6-8kg Shimano Raider setup. Meeting up with the bait fishing boat for lunch, we compared notes and split up again.

This time I went out with the bait boys while Matt picked up his son Angus from shore for an arvo session on the plastics. Matt and Angus smashed us, landing 10 fish between 50cm and 65cm on Z-Man 5” Scented Jerk ShadZ in Bleeding Banana. Matt swears by red plastics for snapper. When fishing around Coffs he uses red or Motor Oil Z-Mans or red Damiki 5” Stick Baits.

After a slow start on the bait boat, we finally settled on a spot and got a healthy berley trail up and running. Before too long, pan size snapper were coming in thick and fast in a sizes ranging from 40-50cm, with a couple of bigger ones thrown in. Daniel and Justin were using circle hooks and sinking whole squid with a luminous bead straight on the head that was just heavy enough to sink the bait to about mid-water.

Fish were coming up and taking the baits consistently for the hour over sunset. Both boys were using baitrunners and it was a harmony of light drag settings going off one after the other with slightly different tones. It sounded like the start of a fishing show on TV.

Seeing that the berley had done a good job and getting the feeling that feeding fish were not on the bottom, I changed the paternoster rig I was using for a plastic on a light jig head with almost immediate success. Floating a 5” Just Jiggin Superminnow in Pearl White on a 1/4oz jig head in the berley trail, less than a minute passed before it went off and I brought another good fish to the boat.

For the next day I jumped back into the plastics boat and we headed to the spot where Matt and Angus cleaned up the day before, with the bait boys close behind. With a few smaller 40-50cm snapper in the boat early, the morning was going well.

Over the weekend, Matt showed me the technique that works for him. We were casting into the drift with 3/8oz to 1/2oz jig heads and letting the plastic flutter down through the water column, using the drag created by the floating line to slow the descent.

If the lure got to the bottom before the boat drifted over the top of it, we’d give it a few bounces before bringing it up to go again.

We found that the feeding fish were nowhere near the bottom and all plastics were hit on the drop from the cast. Most of our big fish were caught on plastics, with the majority of smaller fish taken on baits. Using the above technique, young Angus soon piped up saying he was on, and it looked good.

After several minutes of being ordered around the boat by an 11-year-old and Angus comparing his hooked fish to his PB of 84cm caught last year, the fish came aboard at an impressive 80cm.

It was my turn next, and I too got slammed on the drop. Having upgraded my rod the day before, I felt a little more confident that my gear would hold up. After five or six lunging runs, head shaking all the way, I soon upgraded my PB snapper to 70cm. It was my first snapper with a real knob on its head too. I was stoked.

A couple of the things I learnt from this trip are: good snapper can be caught mid-water, so spending as much time as possible in that area with a slow-falling plastic is important; and using a plastic that you are confident in working is also essential.

We went to Minnie Water with no marks, took home 35 fish between us and threw numerous fish back, proving that following and interpreting your charts on the sounder can produce quality fish. I saw the benefits of a disciplined berley routine, but as for the exact technique and recipe, Daniel has made me swear to secrecy.

What I can tell you is it was nothing really new. We just used small pieces, often to suit the current, and were very disciplined with the delivery. The thing that sits with me the most is how 95 percent of our biggest fish for the weekend were on plastics.

Minnie Water blessed us with great weather and an awesome couple of sessions. It has a great beach launch behind a reef and the locals were friendly and helpful. I will be back with a big box of 5” plastics.