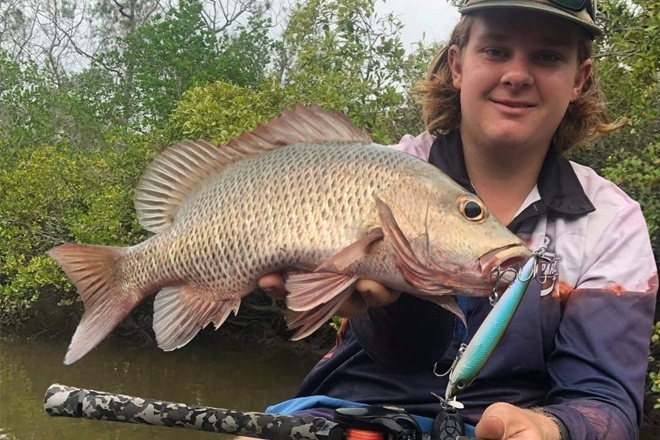 Beat the weather up a creek

The weather’s not looking very good for the in/offshore this coming weekend.  As always, check the weather report before heading out.

The rivers, creeks and beaches are looking like the place to fish. For the anglers that got out over the past week, there was some nice spanish mackerel, tuna and school mackerel caught.

With the warm water still around, the river is seeing good numbers of flathead in the shallows early in the mornings.  We are finding they are moving into the deeper gutters throughout the day when the sun starts to get hotter.  The mangrove jacks have been testing out a few anglers that have been fishing the rock bars and fallen timber. Try using the MMD splash prawn, live sprat or mullet.

There has been good numbers of moses perch caught along the rock walls using the Daiwa Bait Junkie Paddle Tail in the Motor Oil colour.  There has also been the odd whiting getting around the sand flats. The bait of choice as always is a beach worm, fresh yabbies and gulp soft plastic 2.5inch worms in the New Penny and Blood Worm colour.

The mangrove jacks and barramundi have been caught off the rock bars and out of the deeper holes using live mullet / herring / sprat and live prawns. We have found using mono line over the rocks has been giving the anglers more chance of catching the fish due to the abrasive resistance when getting dragged onto the rocks and snags.  There has been some nice estuary cod caught as well. The flathead have been caught trolling hard body’s in the 1 to 3 metre range on the sand flats. A favourite that’s being doing the damage is the Zerek Tango Shad 50mm in pink and white.

The dam has been fishing well for the anglers that have been putting in the time with the hotter weather. The early morning and late afternoon / night has been the time that has been producing the fish.

With the dam at 47% capacity, the fish have been in the deep to try and get out of the hot water. With temperatures in the 30 degrees, the barra have been sitting in the old creeks and riverbeds in the dam, then moving back onto the shallow flats when the sun goes down and when the water temp drops. The method of catching them in the deep water has been trolling hard bodies such as Jackall Squirrell Barra Classics.  A personal favourite is the Guns n Roses +10.  They have also been catching them on the Molix 140 shad in the Black and Gold Perch.  The 5-inch Berkley Hollow Belly has been producing some good fish as well.