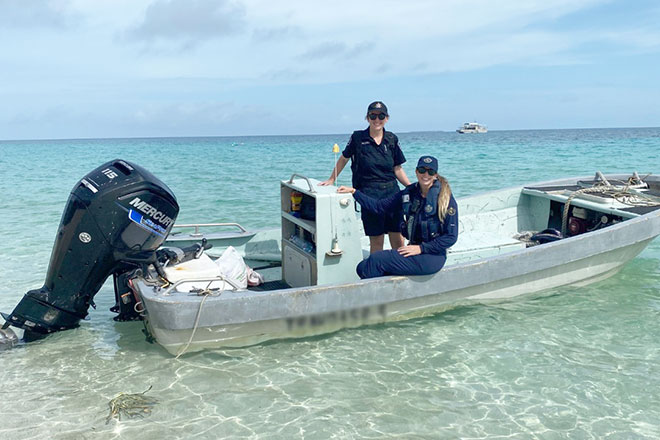 Queensland Boating and Fisheries Patrol (QBFP) Officers from Cairns assisted the Australian Fisheries Management Authority (AFMA) with compliance during the opening of the black teatfish fishery in the Torres Strait. Bêche-de-mer

This commercial fishery is managed by the Australian Government and is only able to be fished by traditional inhabitants of the Torres Strait Islands.

Fishing for this highly sought-after seafood delicacy in the Torres Strait is mainly done by free diving from dinghies crewed by 2-3 fishers or by hand collection along the reefs at low tide. Once collected, the animal is gutted, graded, cleaned, salted and dried.

In February 2022, the Protected Zone Joint Authority (PZJA) agreed to a second trial reopening of the fishery for black teatfish subject to a 20 tonnes Total Allowable Catch (TAC) and requirement of daily landing and reporting of catch through the mandatory fish receiver system. This fisheries management decision incorporated advice from traditional fishers and communities through formal advisory committees which have strong participation from industry members across the five cluster nations of the Torres Strait as well as public community consultation processes.

This was a positive step towards redeveloping the black teatfish component of the Torres Strait Beche-de-mer Fishery and increasing economic returns for a fishery entirely for Traditional Inhabitants.

In early May, co-ordinated by staff in AFMA’s Thursday Island office, with support from a Senior Licensing Officer, the opening involved fisheries officers and AFMA observers, both at sea and based on key islands.

AFMA Fisheries Officers from Thursday Island, Canberra and Lakes Entrance offices undertook land and sea operations to ensure all catches of black teatfish were landed and recorded in accordance with catch disposal requirements.

In addition to the fisheries officers, AFMA Observers travelled from Canberra, Port Douglas and Lakes Entrance to undertake biological data collection of black teatfish on both Mer and Erub Islands. This was the first time that AFMA Observers have been involved in the collection of scientific samples of black teatfish in the Torres Straits, assisting CSIRO to develop an enhanced understanding of the stock. Land based officers conducted fish receiver premises and boat inspections daily while sea going officers, embarked onboard Indigenous owned and operated charter vessel Nekana II (Malu Ventures), landing at remote island campsites to inspect the temporary receiver premises and boats unloading to them.

Compliance was high with receivers reporting the landings at the end of each day to AFMA staff at Thursday Island and the fishery was closed under the 20 tonnes TAC after three and a half days of fishing.

With the support of the Torres Strait community and a range of government bodies the black teatfish trial opening was a great success for all involved.