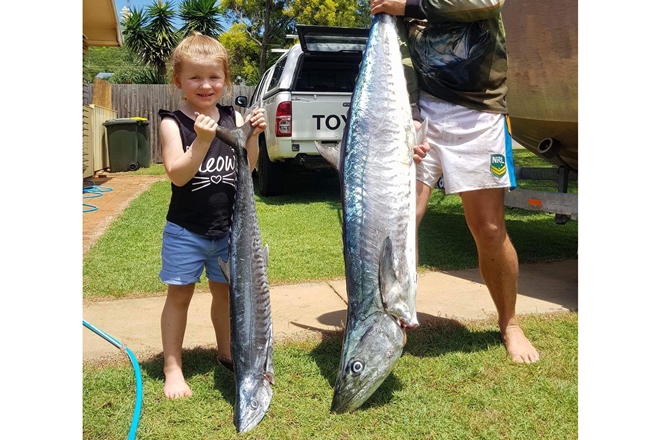 The fishing around the Bundaberg area has remained surprisingly good, considering the amount of fresh water pushing down most of the local systems.

Last week we finally had a break in the weather, and it was awesome to see a heap of boats head offshore.  By all reports both the pelagic and reef species were on the chew.

Good numbers of big spanish mackerel are still being caught right along our coastline.  Trolling high speed lures and casting metal lures like Raiders and Flashas have both been working a treat on these speedsters.

The boats that headed out to the reef also reported catching a nice mixed bag of coral trout, sweetlip, hussar, parrot and red emperor to stock up the freezers for Christmas.

Most of the action in the estuaries has been down towards the mouths with the slightly cleaner water.  Some really nice flathead and big grunter have been keeping both the lure and bait fishermen entertained over the past week in the Burnett.

Most of the rock bars have held a few mangrove jack.  Fishing the last of the run-out and the first on the run-in tides has been prime time to target mangrove jack, with Prawnstars and Paddle Tail soft plastics both getting smashed.

With the amount of fresh around, both the prawns and the mud crabs have fired up in all of our major river systems.  So with the prediction for the wind to be blowing this weekend, it’s looking like a good chance to take the kids out and cast a net and set a few crab pots to catch a delicious Christmas feed.

My son and I did a quick run over to Lake Cania last weekend.  The dam levels were at 100%, and the fishing was fantastic.  We both caught heaps of Australia bass up to 50cm.  Most of the bass were caught on soft plastics and spinnerbaits.

Finally, Lake Monduran Holiday Park is looking a treat if you’re wanting somewhere to camp over the school holidays.  Now we’ve had constant easterlies over the past week, the barra in the dam have been easier to locate, and most of the barra to 80cm have been responding well to lightly-weighted soft plastics and suspending shallow diving hard bodies cast around the weed edges and lily pads.

With only a week or so until Christmas, we hope you enjoy the school holidays, and that you get a chance to get out and throw a line.