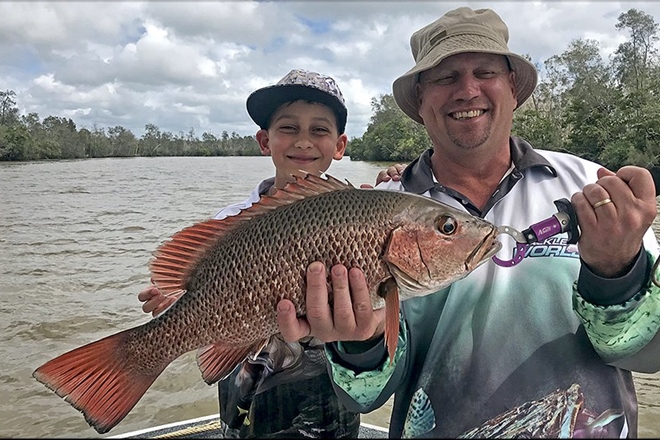 Tyler Darbison from Sydney with a 56cm mangrove jack which he caught up river on a herring fillet. Tyler is allergic to fish so Dad Kevin had to hold it up. Photo: fishingnoosa.com.au

Summer is the time for catching mangrove jack

Anglers in the Noosa River anglers are spoiled for choice when it comes to catching mangrove jack and jewfish. Try trolling hard-bodies if catching mangrove jack is your thing. There are some great lures on the market but one of the standouts is the Maria MJ Twitch in the 70mm, this is a suspending lure that will dive to two meters; perfect for trolling. Fishing the top of the rock bars from Johns Landing to the mouth of Cootharaba has been well worth the effort, try casting the new Chasebaits Flick prawns into snags as you work your way up and down the river, they come rigged weedless so you can cast them right up into the timber with confidence to give you the best chance of catching mangrove jack. From the Ski Run up to the mouth of lake Cooroibah, soft plastic have been working a treat on the flathead. The Zmans in the Redbone and Pinfish a couple of popular colors ,also make sure you have a heavy enough jig head to get them on the bottom as good sized flathead and school jew have been cruising the bottom.

While you are up there try dropping in a few crab pots, make sure you have your details on your float and on your pots to keep yourself legal, remember to only keep the bucks and only four crab pots per person. Heading down river; Woods Bays has been a go to area for most anglers early in the morning, with good size trevally on surface poppers, the Storm Chug bug has been a standout bagging some nice giant trevally as well as tailor. The stretch of the river from Gympie Terrace up into the Frying Pan has been producing good numbers of whiting, live worms pealed prawn and yabbies’ have been some of the favored baits. Also casting over the flats with the River2sea Skinny Dog surface lures with the walk the dog technique has been a great way to bag some quality fish.

On the beach we are seeing some nice flathead, the females are offshore spawning at the moment so the odd large flatty has graced the beach. Fishing the gutters and deeper holes have seen quality sized dart and whiting using live beach worms. Big strip baits has been working well for jewies and tailor, we have seen some sensational fish landed over the past couple of months. Fishing around the headlands, you can pretty much expect anything at this time of the year, from jewfish, small squire, sweetlip and maybe the odd spotted mackerel or tuna.

Offshore the Pelagics are on many anglers mind, there are reports of schools of good sized spotted mackerel from some of the southern reef along with a report of a couple of good spanish coming from Double Island Reefs. Even though the pelagic are starting to come on the chew the bottom is also very rewarding, Trout and nice sized sweetlip, snapper cod and jewies have been on the chew in and around the bombies and pinnacles of Sunshine reef, while quality cobia seem to be on most of the closer reefs. Jew Sholes and Halls reef have been good for sweetlip smaller snapper and maori cod. Tru-Turn Strip bait rigs with strip bait of fresh mullet or salted bonito have been great baits.

In the Fresh water both lake Macdonald and Borumba Dam have had a fair bit of water running in, most of the bass have made their way to the deeper sections of the dams, fishing heavily weighted soft plastics, Zerek Chilli Padi micro jigs and Strike pro C-Vibes has been working well, for those that love working the edges try Cicada and frog imitations. Tamico soft shell Cicadas, Lunker Hunt pocket frogs have both claimed good fish.

Now for all the latest information log onto www.fishingnoosa.com.au for up to date bar and fishing reports, don’t forget to drop into Davo’s Tackle World, Davo’s Boating and Outdoor in Noosa and Davo’s Northshore Bait & Tackle at Marcoola to find out where the fish are biting, and remember Tight Lines and Bent Spines!