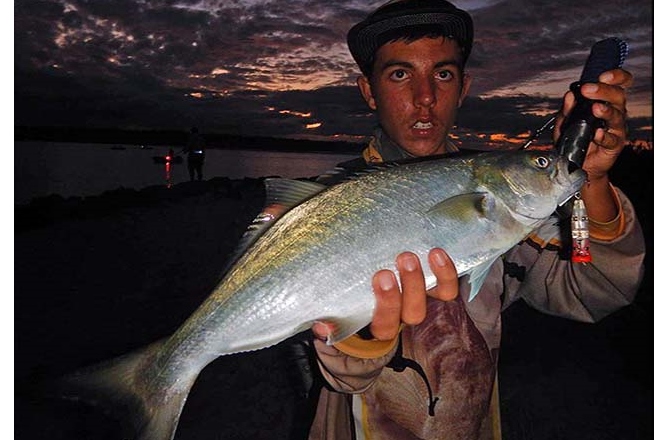 Zane Hermence went for a quick flick around the Woods Bay on Sunday afternoon but didn't have much luck. Then he got to the Sand Bags and he managed to hook something on the surface and it was a pb tailor at 47cm. Photo: www.fishingnoosa.com.au

Some big tailor in the Noosa River

With some pretty average weather over the last couple of weeks, most reports have been coming from the river. Flatties are still being caught consistently throughout the river. The channels around the river mouth and the lower end of the first ski run have been the most productive. The cooler weather will see some of the bigger fish sunning themselves in the shallows at high tide.  A small shad style lure like a Zerek tango shad or a Strada villain works really well on these fish, you can even try your luck with poppers that are worked ultra- slowly, just remember that flatties are a bottom dwelling fish so the water that you are working must not be too deep to entice a strike. Whiting numbers have increased this week with some great catches reported. The top of the tide and the first hours of the run out down at the river mouth and frying pan have been fishing well. Some big tailor in the Noosa River have also been landed.

Noosa’s main beach and little cove have also held good numbers of fish with some really nice sized whiting being landed. Live worms have been the go to bait for catching a feed of these tasty fish, try targeting Whiting with a black magic whiting whacker, this rig combines a very effective visual attractant as well as bait and has claimed some really big whiting this week. Some really big Bream have been caught this week with the river mouth on the run out tide fishing well. Very lightly weighted baits fished in a well maintained burley trail has been particularly productive. Small surface lures fished close to structure will work very well, especially if you target them in the low light periods of the day. Lures to consider using are Atomic Hardz pop 50, Strada Viral 70 and 85 (for the bigger fish) and Duo Yurameki 48. River predators like trevally, Queenfish and Tailor have all been landed this week. The Tewantin stretch up stream of the powerlines has been really producing. Once again targeting these fish around the low light periods will see you come up with the goods. A lot of these larger fish have been biting through leader so remember to up size the poundage of your leader, 15- 20 lb is recommended.

The weather has been a bit hit and miss of late with the forecast seeming to change on an hourly basis. There were a couple of opportunities for larger craft to get out with last Sunday one of the best for some time.  Spanish Mackerel are still around with some nice 10kg + fish being landed this week. Sunshine reef has produced Cobia, Grass sweet lip, Venus Tusk fish, coral trout and pearl perch. North Reef has had Cobia, Spanish mackerel, Pearl perch, Moses perch, snapper and tusk fish. As far as the outer reefs go; due to wind and swell most craft have kept fairly close.

On the beaches; Teewah Beach fished well for Bream, flathead, whiting and tailor.  Double Island point has also been very popular this week with the rocks around the headland very productive with good catches of Bream, Tailor and Flathead as well as some legal snapper. Live worms and pipis have been working very well as well as have whole pilchards and mullet strips. Areas around Marcus and Sunshine Beaches have also fished well for Whiting, Bream and school sized Mulloway.

Borumba Dam has slowed a bit this week however some good Bass have been caught on the surface. The bays have fish well with schools of fish holding in fairly shallow water. The surface has been a bit quiet this week but Saratoga are still being caught on subsurface lures fished in the upper reaches of each of the major arms. Lake Macdonald has had a few nice sized bass in the upper reaches near the bird hide and road bridges. Try and get to these areas early as the fish seem to go a bit quiet once the day gets on a bit. A few Bass have been taken along the bubble line and up around the Botanic gardens.